In my previous article “Best pose references for artists” you can find a list of websites that provide many great photos of various people for our use. However, the list was focused on the human figure. In this post, you will find photo resources of other objects, that will help you to improve your visual library. 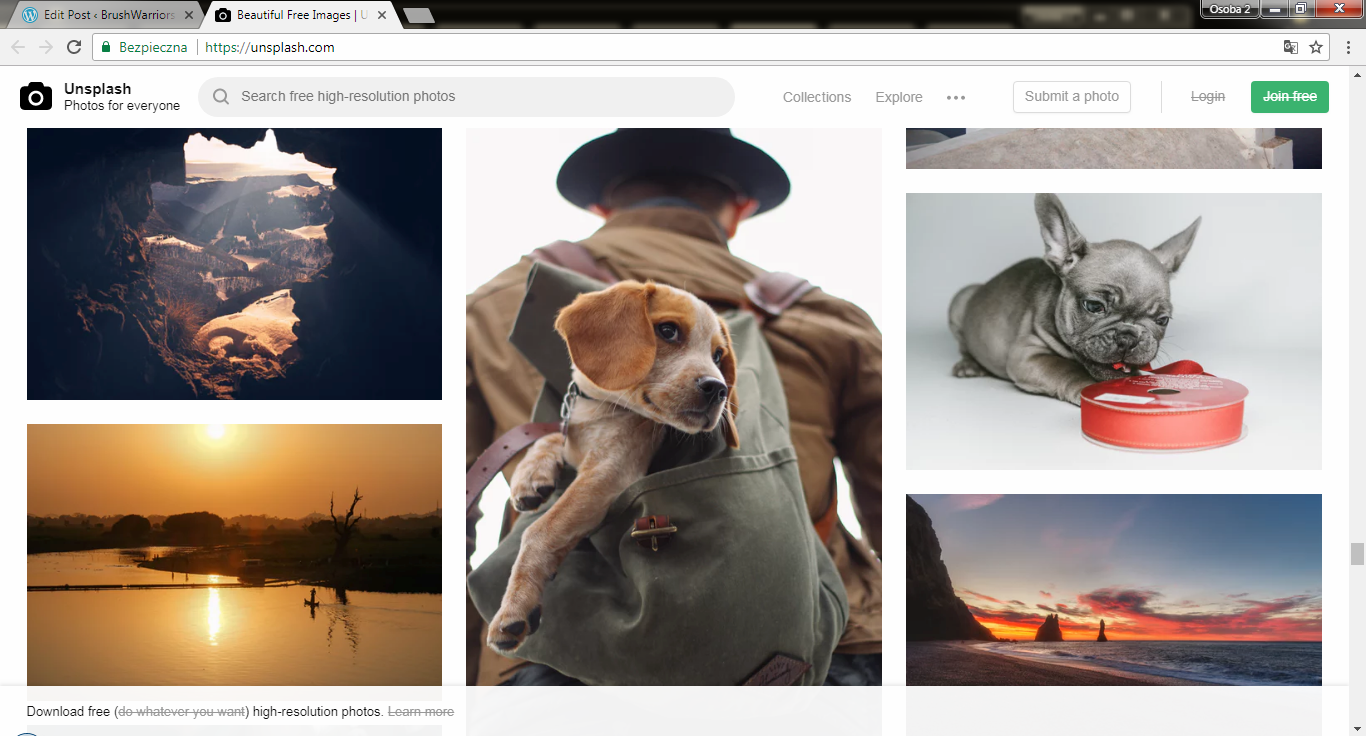 Unsplash is a photo discovery platform that provides photography images that are free to use. You can find here various photos, from portraits, architecture to such photo collections like “Bible” and “flowers with black background”.

One of the best features of the Service permits you to search, view, and download photographs that have been uploaded by Unsplash users (“Photos”). You may download and use Photos from the Service in accordance with, and subject to, the Unsplash License. As mentioned, the service provides you a non-exclusive license to download, perform copy, modify, distribute, and use photos from Unsplash for free, along with using photos for commercial purposes, without any permission from or attributing the photographer or Unsplash.

This means that Photos on the Service come with a very, very broad copyright license under the Unsplash License. However, there are few restrictions, so please read the terms first. 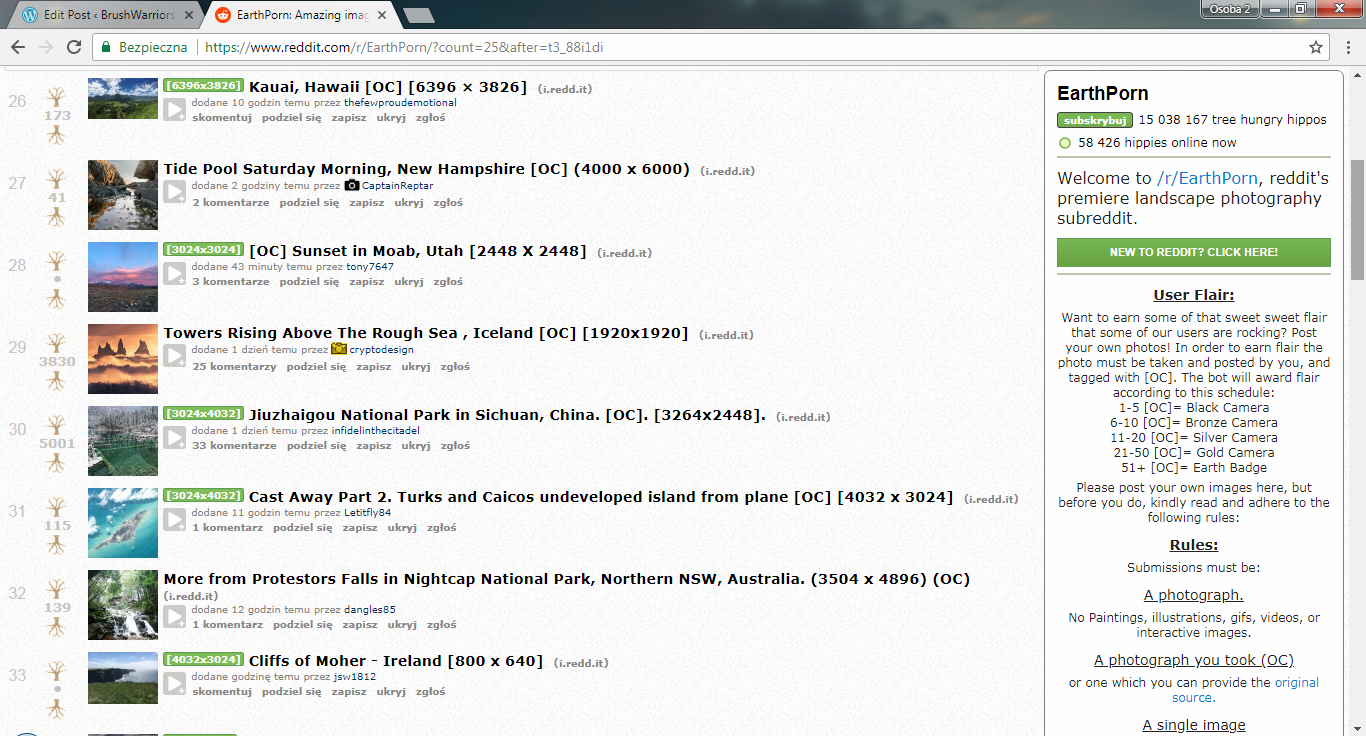 Yes, Earthporn – pornography with Earth in the lead role.
It’s a Reddit selection of high-res photos from all around the planet – amazing images of light and landscape. No wonder this subreddit is named “Earthporn” you can’t stop looking at those beautiful photos of landscapes!
For uploading their own photo, users receive a flair. The badge depends on the number of photos that user has uploaded. The original photos uploaded by the users are marked with the [OC] tag, which means “original content”. You won’t find here any photography images that feature signs of human activity, like architecture or machines – those are disallowed and rejected by the moderators.
Please don’t edit, modify or rehost images submitted on Earthporn without any permission of the photographer. This also includes edits to “fix” the colors of an image, of course, removing a watermark. 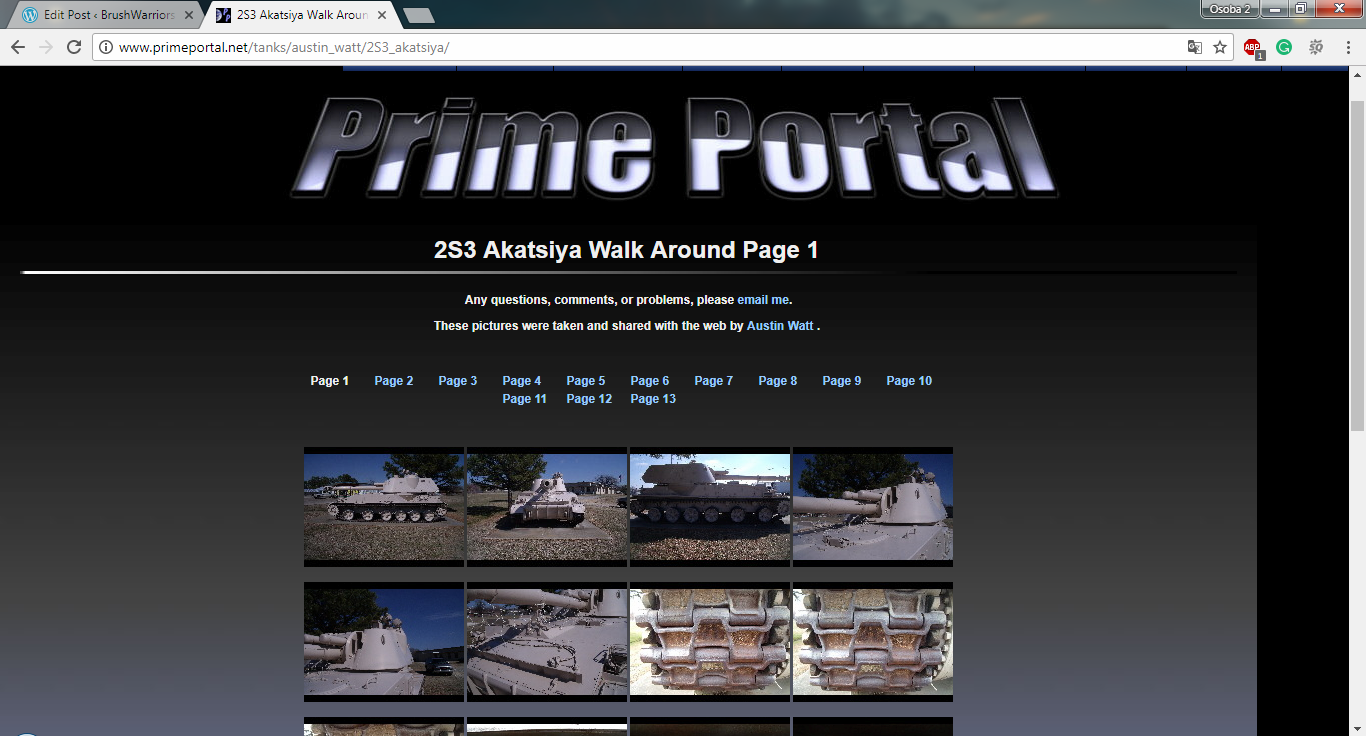 Prime Portal is a Military Enthusiast & Modelers Reference Site. It provides over 230000 of Military Photos – Walk Arounds – Reference Photos – and much more.
Obviously, the website may not be the most band-width friendly site, but you will difficulties finding a more complete military photo collection on the internet. You will find here a collection of photos taken by professional photographers and hobbyists from all around the world.  Most of the photos are high resolution, so detail abounds.

The website was created in 2001, when the author found an M60A3 on static display and shot his first walk around. Apparently, it took a lot of attention of people from various forums, where the photography was showcased.  There were requests for more detail on the tank, so the author went back and shot a second, more detailed, walk around and posted that one as well.  After that, he put up a walk around of LAWs Rocket and a WWII 3″ Anti-tank Gun.

Prime portal wasn’t updated for some time, until other people started asking about adding photos.  From there, the site exploded!  Currently, there are over 289 contributors from 40 countries and over 230,000 photos (stats as of Feb 2011) and the new stuff just keeps on coming!  So sit back, pick your favorite topic and enjoy! 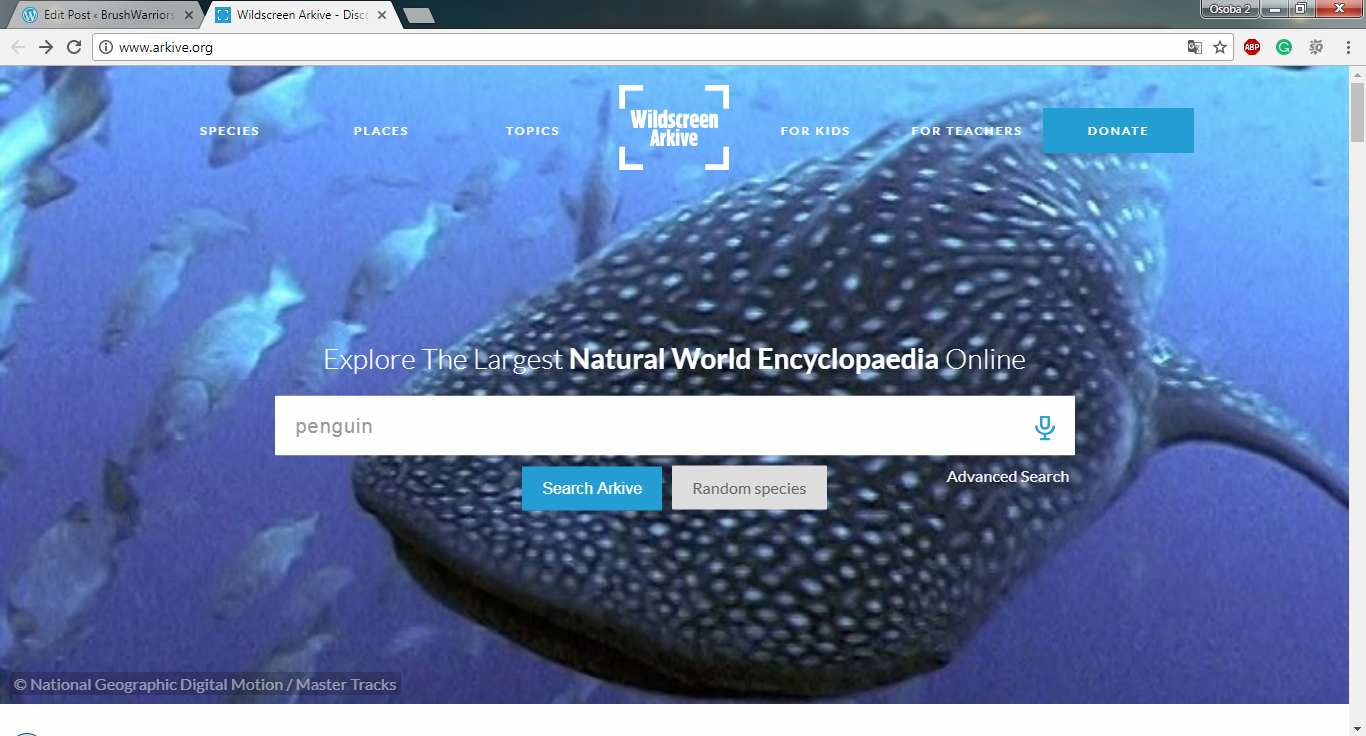 ARKive is a global initiative with a mission of “promoting the conservation of the world’s threatened species, through the power of wildlife imagery”, which it does by locating and gathering photographs,  films and audio recordings of the world’s species into a centralised digital archive. Its current priority is the completion of audio-visual profiles for the c. 17,000 species on the IUCN Red List of Threatened Species.

With the help of the world’s best wildlife filmmakers and photographers, scientists and conservationists, ARKive is creating an awe-inspiring record of life on Earth.The website is freely accessible to everyone and preserved for the benefit of future generations, Arkive is a truly invaluable resource for conservation, education and public awareness.

All Arkive images remain the copyright of the owner, and cannot be published or used for commercial purposes without prior agreement by the relevant copyright owner. However, they are available for internal private educational use by educators and students (for example they may be used in lessons, presentations, school projects etc). 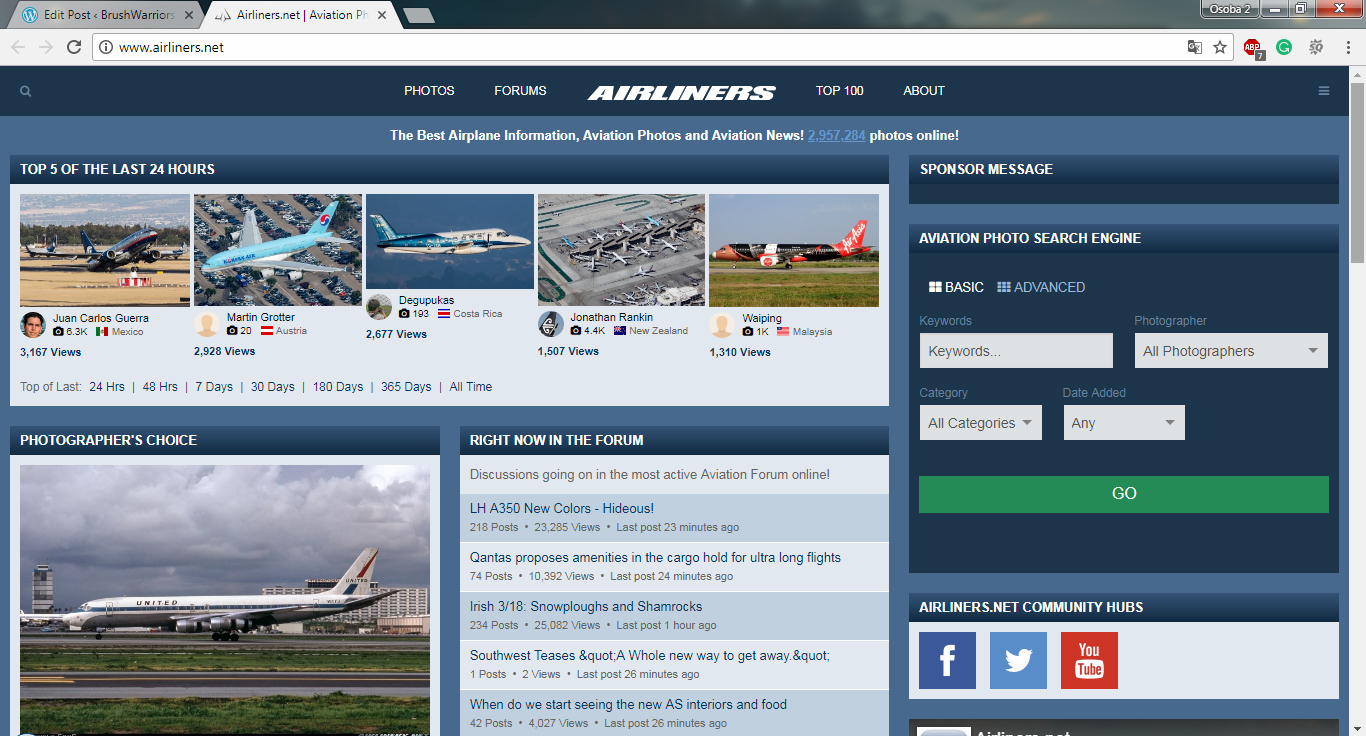 Airliners.net is an aviation website that offers an extensive photo database with over 2,956,272 of aircraft and airports, as well as a forum catering to aviation enthusiasts. Created by Johan Lundgren, Jr., the site originated in 1996 as Pictures of Modern Airliners. It was handed over to Demand Media in 2007 and underwent a major redesign in 2016.

The site has two main features: the photo database and the forum. The database contains over 2.7 million photos with over 8.6 billion total views as of June 2016. All photos undergo screening prior to being admitted to the database, which can be searched by various factors including aircraft type, the airport at which the photo was taken and the aircraft registration. The forum is divided into ten subforums: Civil Aviation; Travel, Polls & Preferences; Technical/Operations; Aviation Hobby; Aviation Photography; Photography Feedback; Trip Reports; Military Aviation & Space Flight; Non-Aviation; and Site Related. Airliners.net also offers a complimentary newsletter service and a database of information on aircraft types developed with the help of Aerospace Publications.

The photos are the property of the photographer, if you would like to use a photos for commercial purpose, you have to contact the author first. 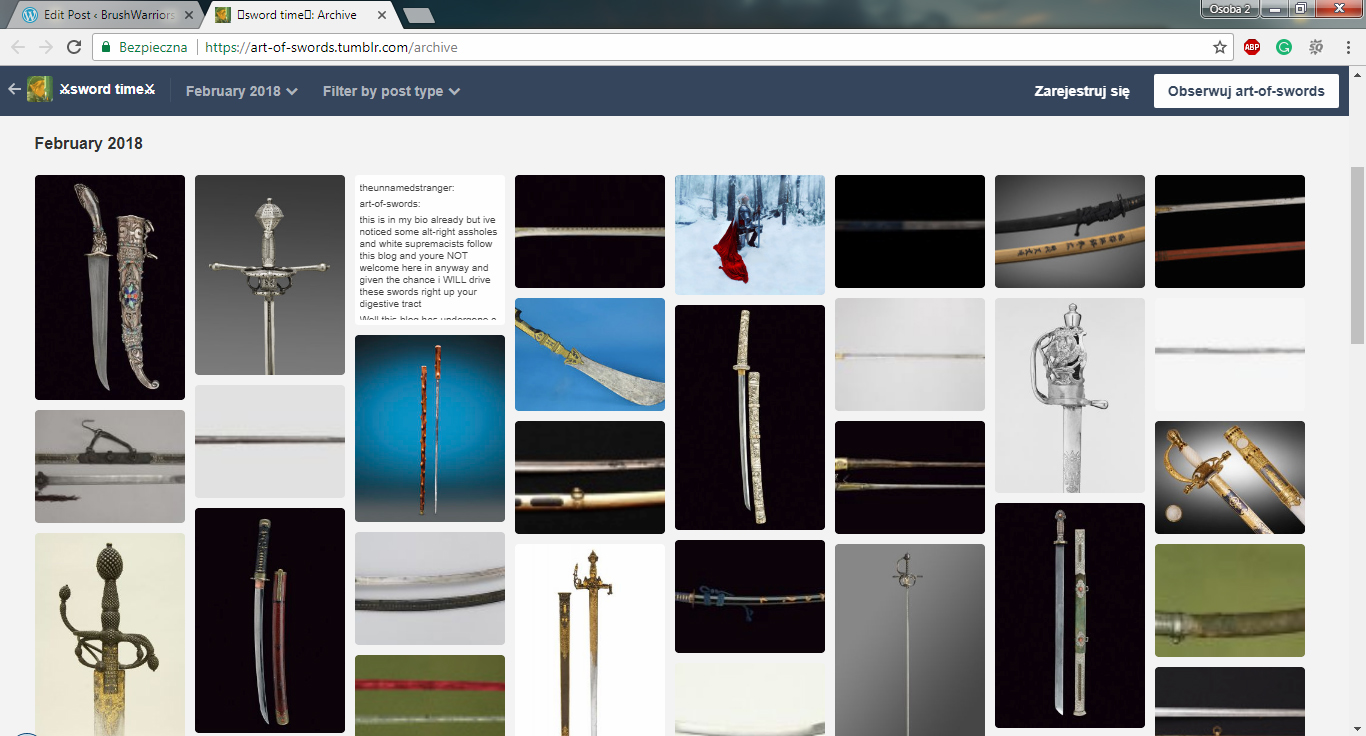 A Tumblr page for enthusiasts, practitioners, collectors, and investigators of swords (and related historical weapons). Real swords, decorative, historical, fantasy; humor, social, ID requests, shopping help, art. This is not the original a-o-s, they deleted a while back, and right now members of the community are mostly keeping an archive of their old posts here) 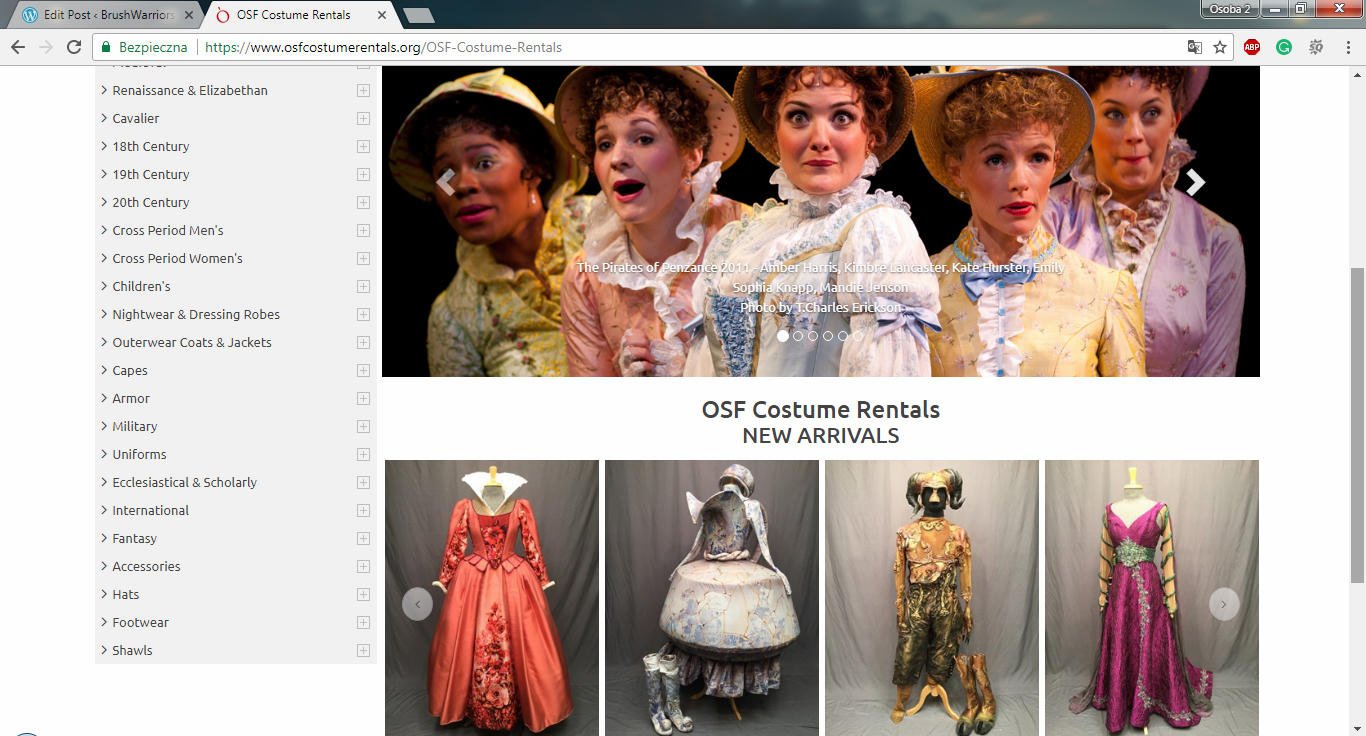 Since 2004, the exquisite costumes created by the Oregon Shakespeare Festival’s talented professional artisans have been available for professional use through OSF Costume Rentals. OSF Costumes offers a wide variety of costumes, accessories and footwear, in many different styles and periods, from Roman to Modern, and beyond, featuring an extensive selection of Medieval and Renaissance costumes. 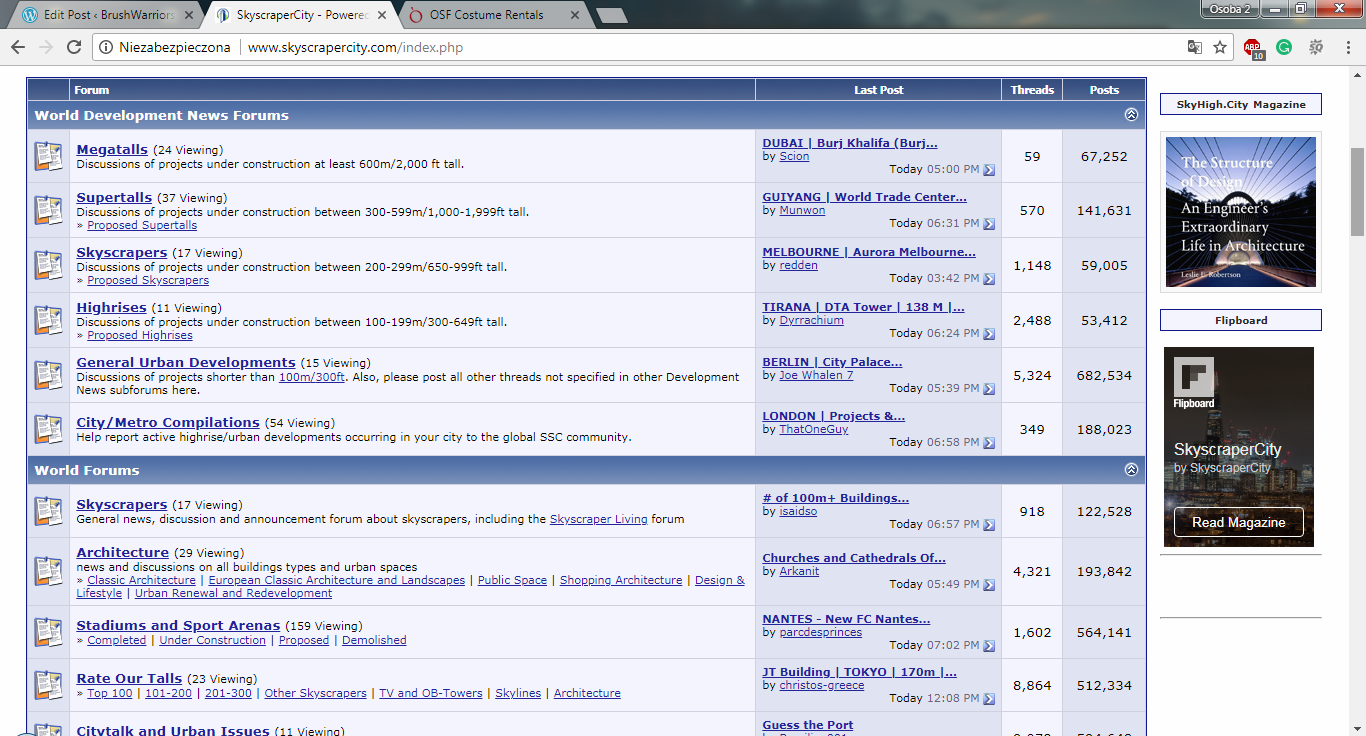 SkyscraperCity, was founded in 2002 by Jan Klerks and is the world’s largest online forum about skyscrapers and urban related topics.  As of December 2016, the forum has over 350,000 members, over 1 million threads and over 97 million posts. It was considered the largest online forum in the world in 2010. In 2009, the forum attracted more than 500,000 unique visitors daily. 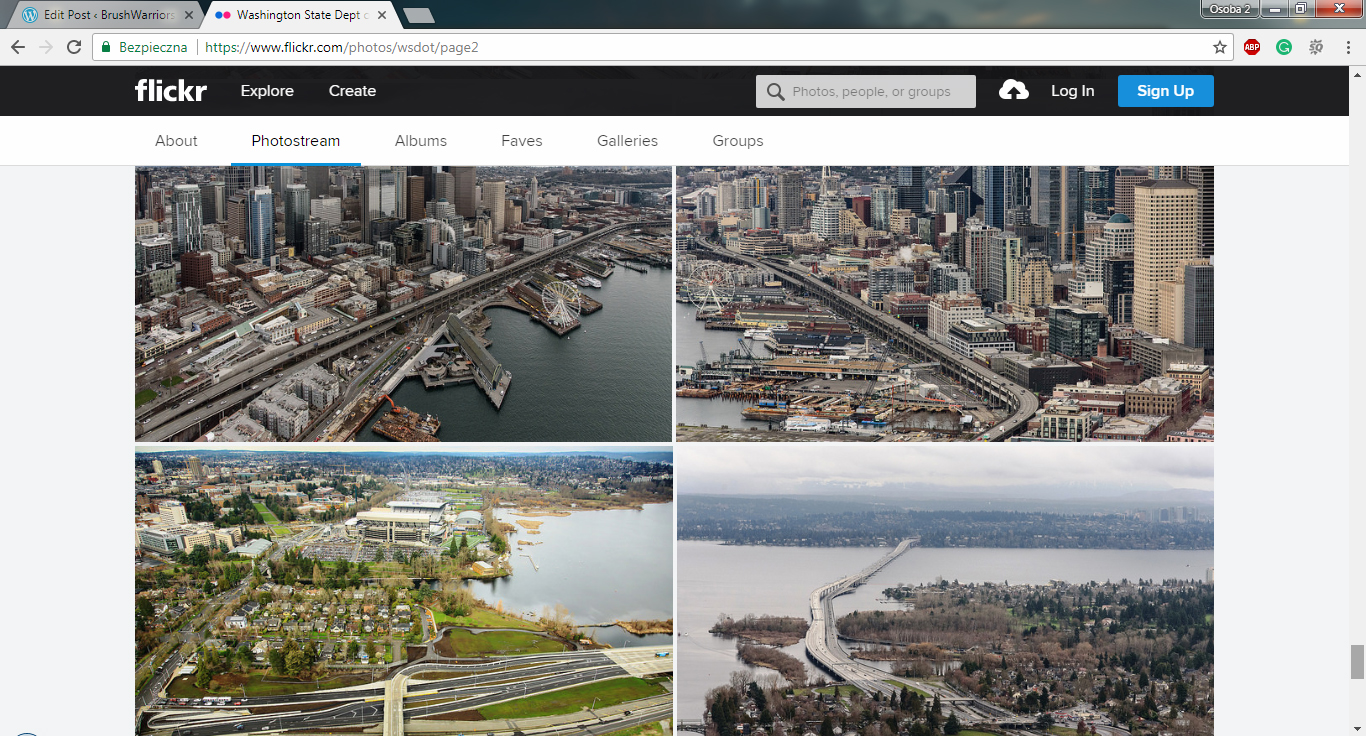 The Washington State Department of Transportation (WSDOT or WashDOT) was established in 1905. The agency, led by a Secretary and overseen by the Governor, is a Washington governmental agency that constructs, maintains, and regulates the use of the state’s transportation infrastructure. WSDOT is responsible for more than 20,000 lane-miles of roadway, nearly 3,000 vehicular bridges and 524 other structures. This infrastructure includes rail lines, state highways, state ferries (considered part of the highway system) and state airports
We are the Washington State Department of Transportation. Our crews around the state take some amazing photos of our highways, bridges and ferries. Flickr lets us share them with you. 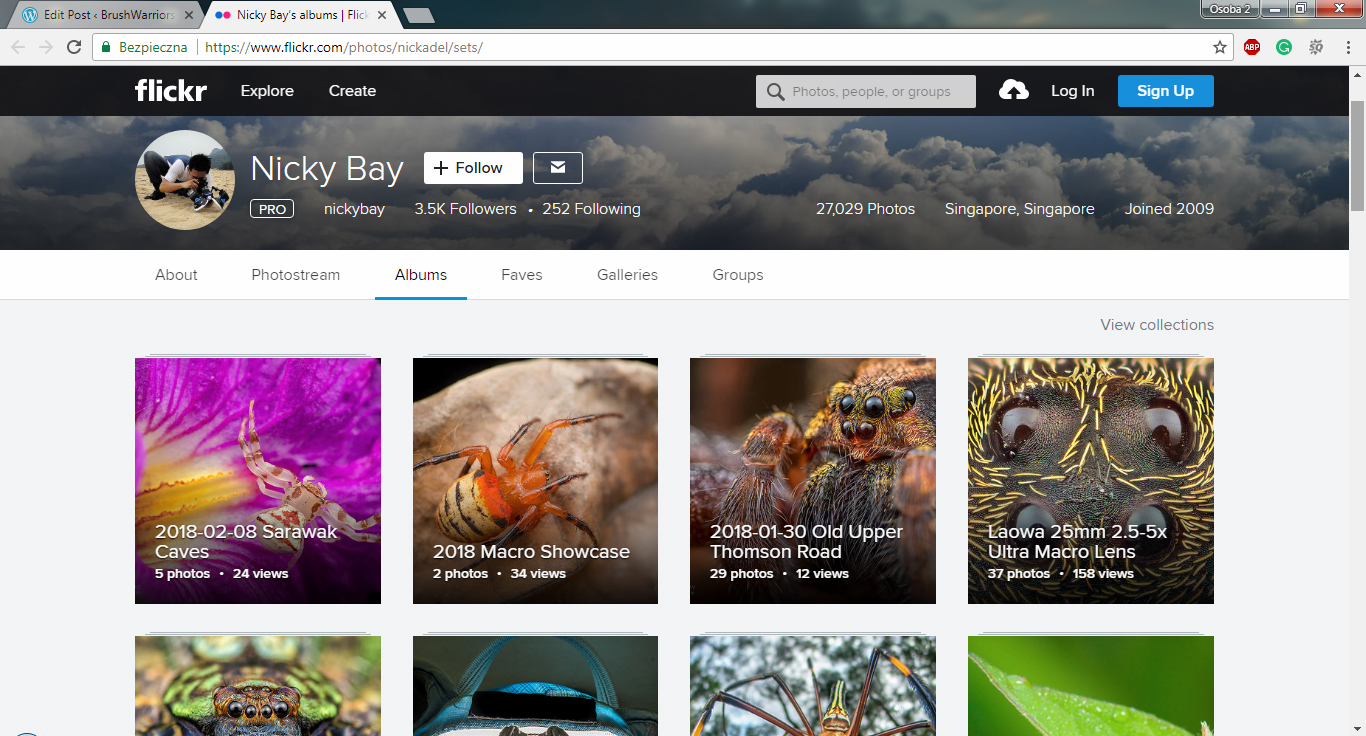 Hobbyist macro photographer. Most shots were taken in Singapore unless otherwise stated in the tags.

Sometimes, as the author states, he would still post out-of-focus and poorly shots. Those are present to aid in identification sometimes when hendidn’t manage to get a good shots of that same angle and subject.

Please contact directly the author nicky@bay.to for licensing of photos. 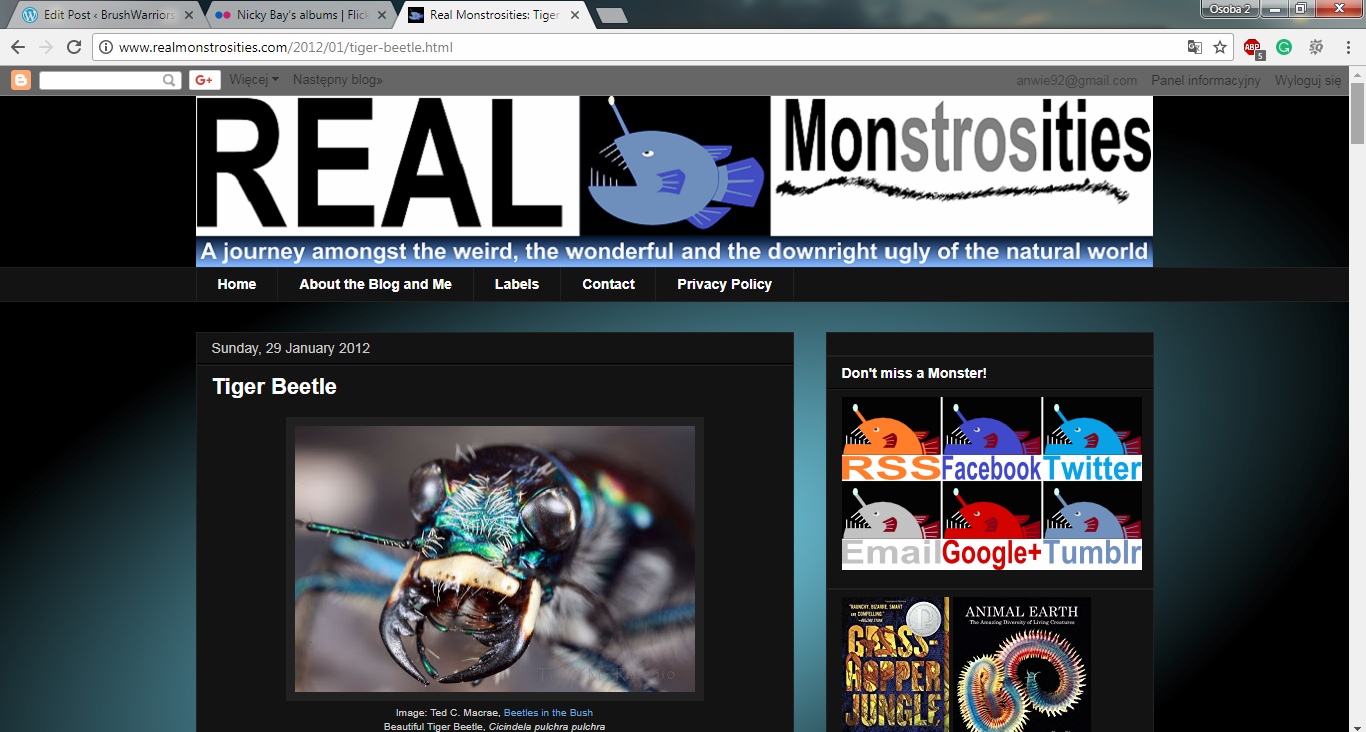 A blog created by Joseph Jameson-Gould. The photos are labeled to about 20 groups: Cnidarian, Comb Jelly, Annelid, Cephalopod, Other Mollusc, Echinoderm, Arachnid, Crustacean, Insect, Other Arthropod, Cartilaginous Fish, Bony Fish, Amphibians, Reptiles, Birds, Mammals, Plants and more.
You should consult the respective privacy policies of these third-party ad servers for more detailed information on their practices as well as for instructions about how to opt-out of certain practices. 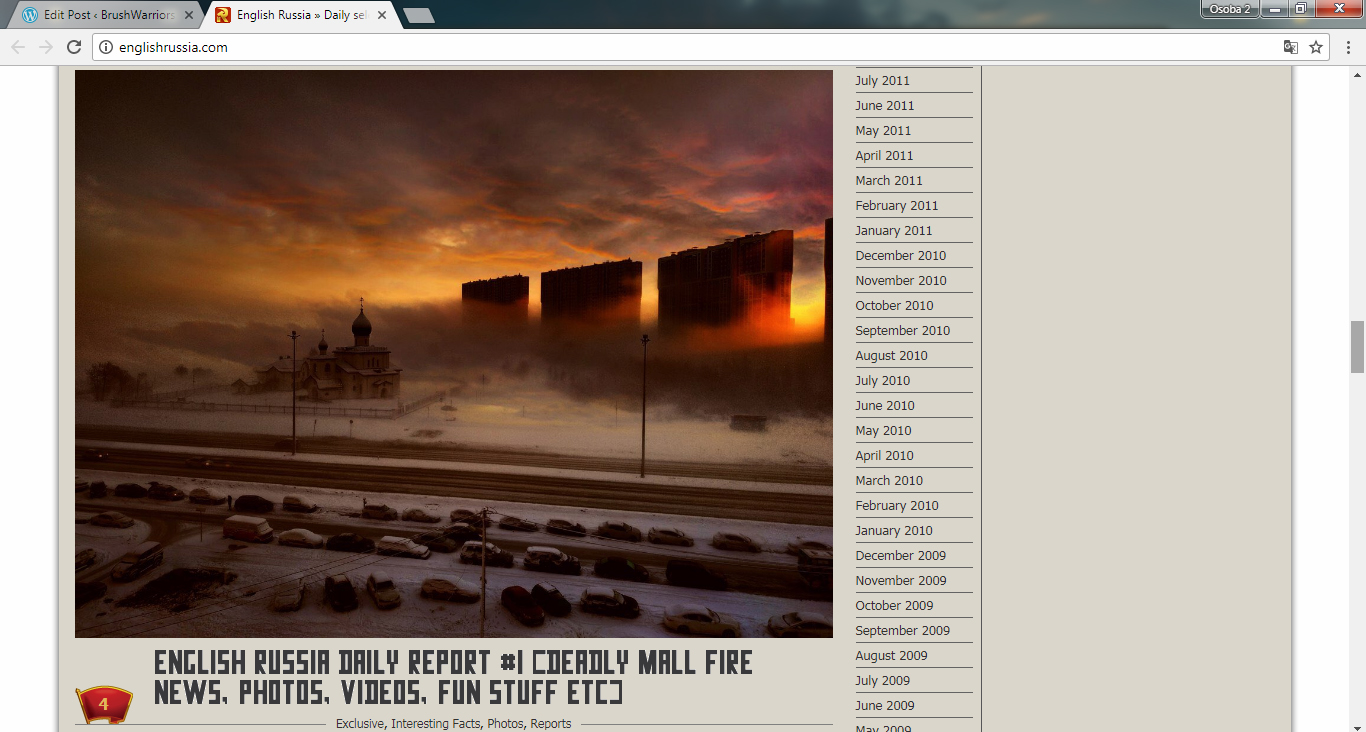 English Russia is a personal blog of a Russian person who was not satisfied with the situation, when the many things happening in Russia had not been covered by the larger mass media. So he started blogging about things that were often outlooked by the media giants and pretty quickly this proved to be interesting and exciting – both for him and for his numerous readers that started to like the blog. In a matter of just one year it was cited as one of the most popular blogs in the world. The founder himself preferred to use the pen name of Tim (standing for the “TEAM” – English Russia team which consisted at the time of just one person). You can find here many photos of Russia’s city, people culture, and many more. 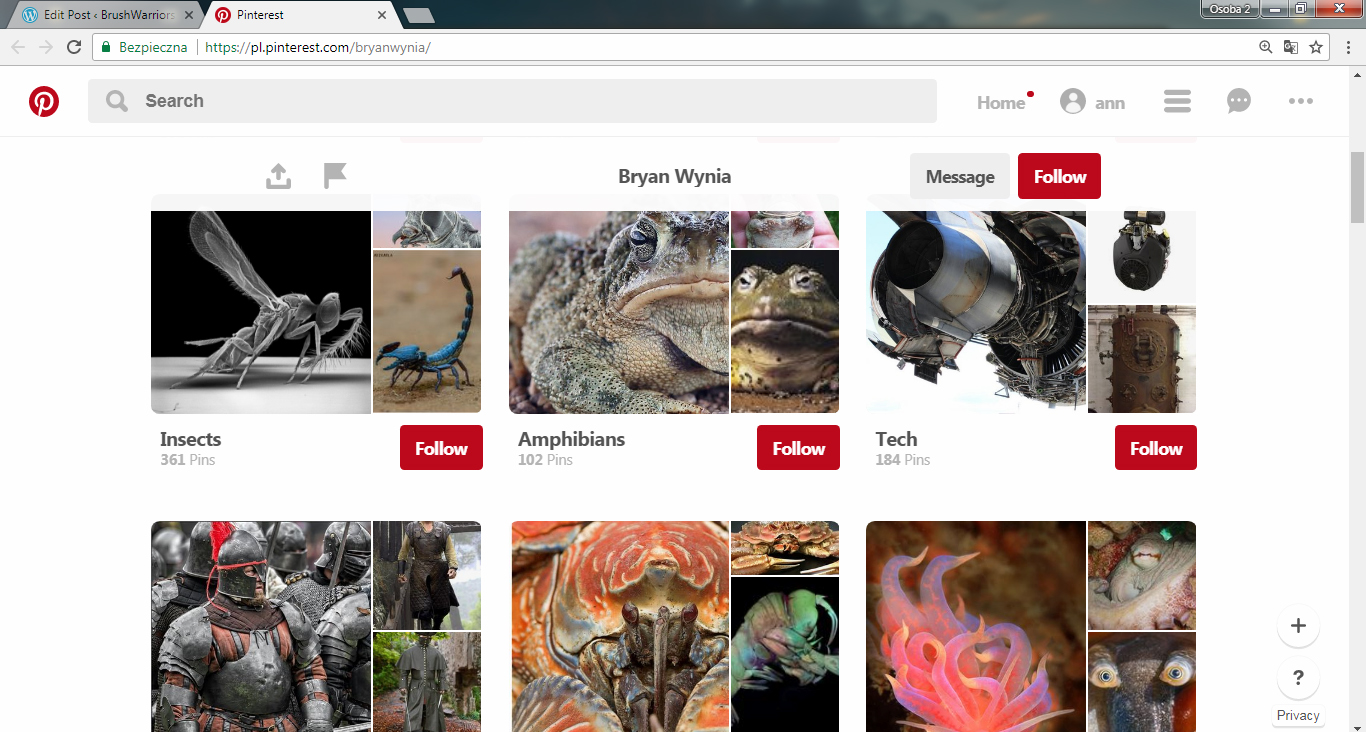 Bryan Wynia is an artist and designer, his passion is to design monsters. He gathered lots of photos on his Pinterest account, and divided them to different groups. His artworks and gathered photos are a great inspiration and references for other artists.