Looking for a cool, but practical gadget? Digital Pen Holders are something you may be interested in 🙂
In this article, I will show you some awesome pen stands for digital painters, you won’t misplace your pen having this stand! 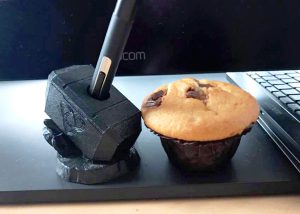 A few days ago, on a FB digital painting group, someone published a photo of their workspace,  with their digital pen placed in coolest Wacom pen stand ever! It was stylized as Thor’s hammer and I instantly thought of my friend – that would be a perfect gift for her!

A few people responded to the photo showing their pen stands: someone had a Jabba from Star Wars as their pen holder, someone else had baby Groot that holds their pen…

So, I decided to look around the internet, make a list of cool digital pen holders and share it with you!

Wacom Pen Holder as a gift for a digital artist

You see, I’ve always had problems with choosing gifts for my friends. I wanted to give them something nice, but on the other hand, I wanted my gift to be something that will be useful for them.
So, my artsy friends, usually receive from me some art stuff – sketchbooks, a paint set… but, if you are interested in art, you know how art materials can be expensive. And I don’t want to be tacky by giving them just a few Copic markers (a full set is expensive, so I also gathered a list of cheaper Copic marker alternatives), or spend lots of money on something that they will never use.

The Pen Holders are something that can be useful and match someone’s interest at the same time (I love Guardians of the Galaxy, I need this baby Groot to hold my pen!) – by interest, I mean something like favorite movie characters, not drawing, so if they already have their pen holder, your gift can serve as a cool decorative figure.

So, the conclusion is that if I won’t be able to find any other good ideas for my artsy friend’s gift, I will buy them one of the Wacom pen holders 🙂

First, I need to show you how a standard Wacom Pen Holder looks like (if you are not a digital artist you may want to know this – if you are one, then you can skip this part).

I have a Wacom and Huion graphic tablets, so for the comparison, I photographed also Huion’s pen and it’s stand.
Wacom pen stand on the left side, on the right side – the Huion pen stand. 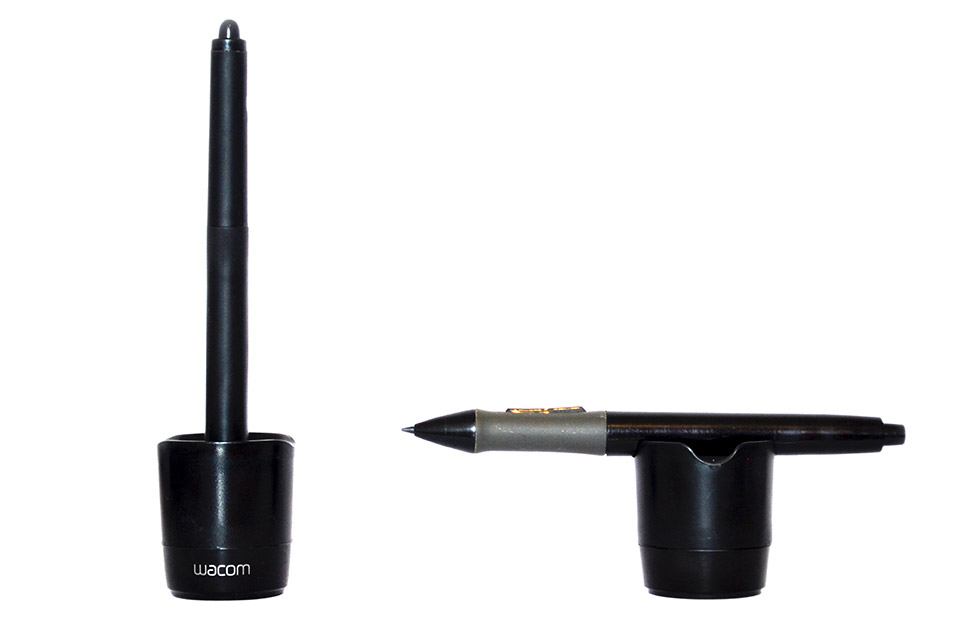 As you can see, Wacom’s stand allows us to place the pen both vertically and horizontally, while in the Huion’s stand we can place the pen only horizontally. Both stands have slight concaves that secure the pen, but in comparison to Wacom (2 grooves), Huion has 4, deeper grooves. Also, while holding the stands, Wacom’s stand seems to be heavier than Huion’s.

The Pen stands is also a nibs container. The nibs are stored inside of the stands, placed in a sponge. You receive the nibs together with a purchased stand. 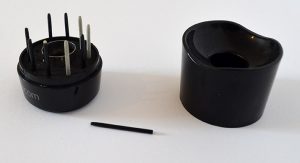 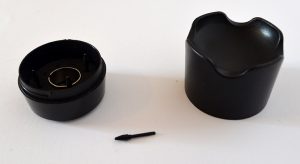 Here’s a comparison of Wacom and Huion pen nibs.

Geekblivion is an etsy shop, where you can get an awesome sculpture, that is in fact a pen holder! The designs are clever, in some models the pen server as a part of the sculpture (for example: as a handle in Thor’s hammer pen stand).

Really cool gadgets for a desk. You can ask the owner for an overpaint (additional price, but it’s worth it!). Below I listed some of my most favorite Pen Holders.

The stylus holder I saw on one of Facebook’s art group. It was 3D printed without supports on the Flashforge Dreamer with a print time of 6hrs. It was featured in Jason Momoa’s Super Bowl making of promo by Legacy Effects & The Mill. You can spot Mjolnir at 2:54 second with Jason Bergman VFX Supervisor at The Mill.

My favorite stylus stand, baby Groot from Guardians of the Galaxy! Not all figure pen holders have a place to store nibs, this one has.

Also, this figure can hold 2 pens: 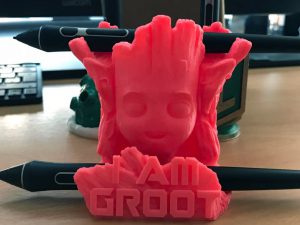 Most of these stands come in a multitude of colors, including black which compliments the Wacom accessories.

A nice gift for a fan of The Game o thrones! The Throne pen holder is the largest of the pen holder designs and is inspired by Game of Thrones. I like the idea of how the nibs are stored in this stand – on the top of the throne are holes where you can out the nibs.

Here’s another cool gift idea – Jabba the Hutt figure from Star Wars as a pen holder.
This sculpture is a much-admired creature from the space action genre, created as a collectible for artists who love the digital arts and 3D Printing. It serves as a cool piece of desktop art as well as holding your art peripheral.

Slimer from Ghost Busters! You can see a video of his creation in Zbrush above.

I wrote an article dedicated to Pen Holders created by Freakfinity, you can read it here: Wachibi Stylus Holders

Freakfinity is a shop run by Jonathan Shaller, a Digital Sculptor & Video Game Artist.  He worked on titles ranging from Call Of Duty, The Transformers, Angry Birds, and more. He’s also a member of the E-Nable organization and assists in the creation of 3D printed Children’s prosthetics.

I own one Wachibi, the Trojan Unicorn model, and I absolutely love it, here it is:

The Pen Holders can be printed in various colors (blue, black, red, green), but if you want you can ask the owner to paint them – they will arrive at a later date.

The company is located in Malta, they need a  “6 Business Days” preparation time + shipping time, so keep that in mind when ordering their Pen Holders. Each Wachibi comes with a nib holder on the underside. 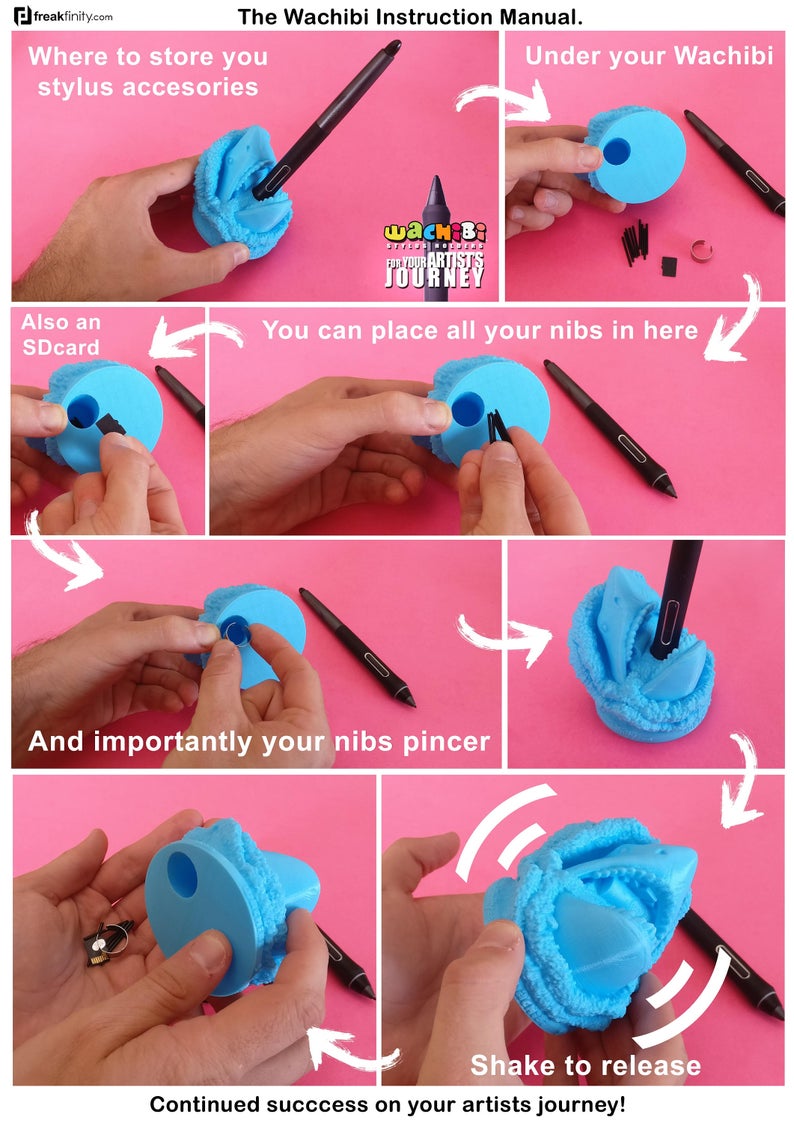 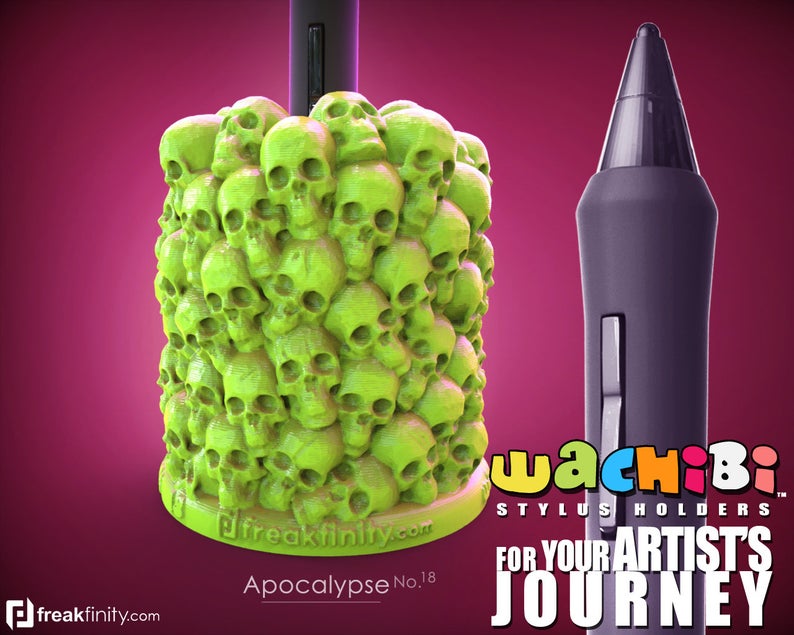 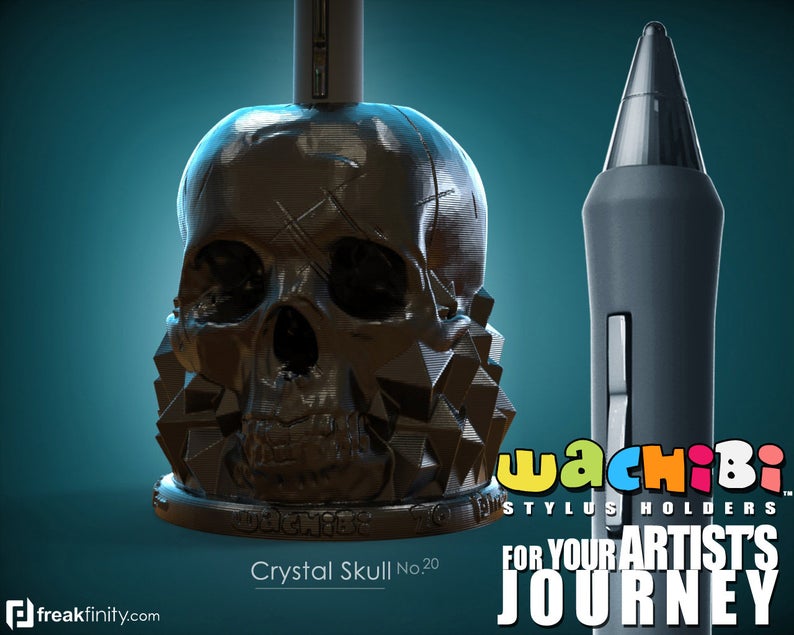 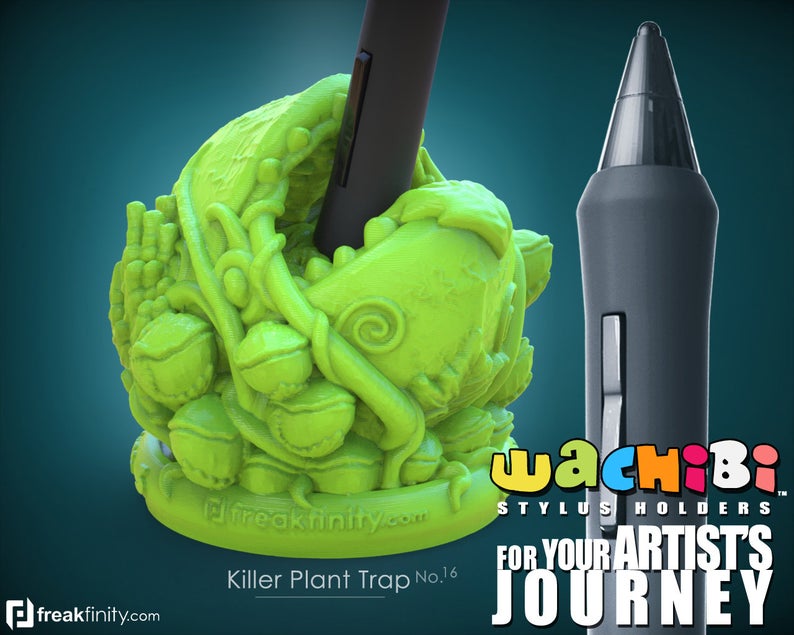 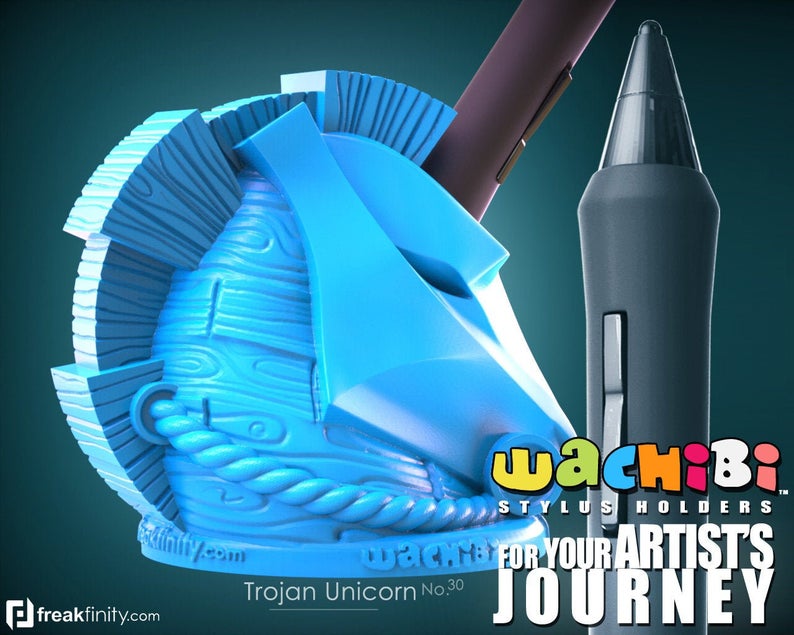 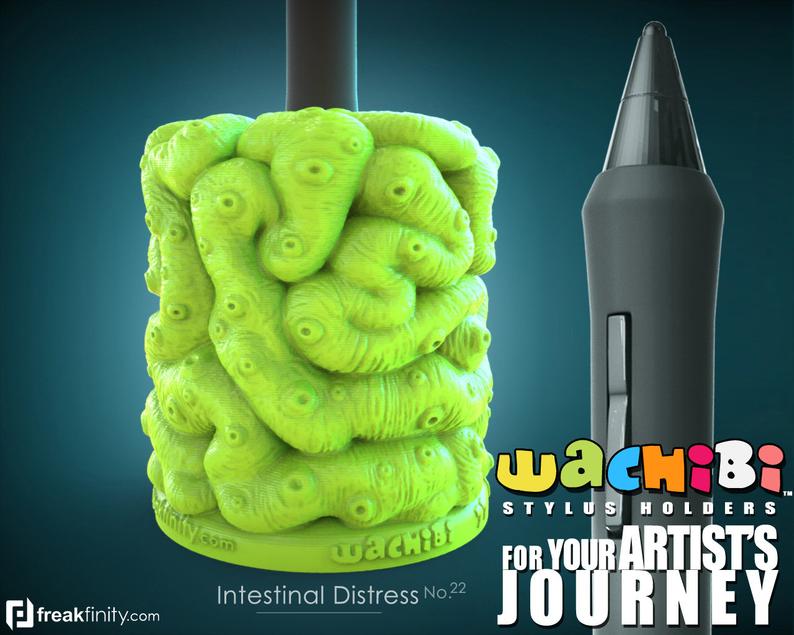 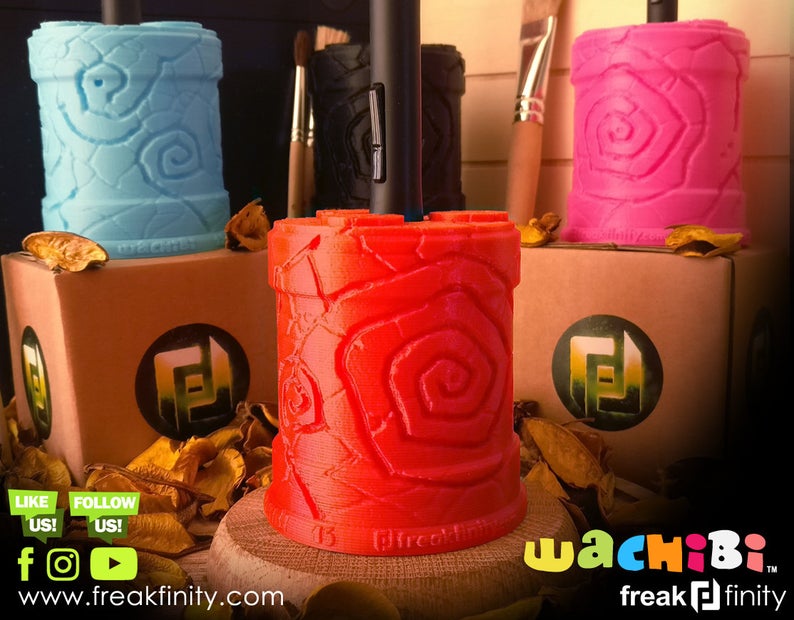 Wachibi Stylus Holder Mini costs less in comparison to the Wachibi Stylus shown above, and you can order a custom made pen holder with your name on it!  They come in various colors. 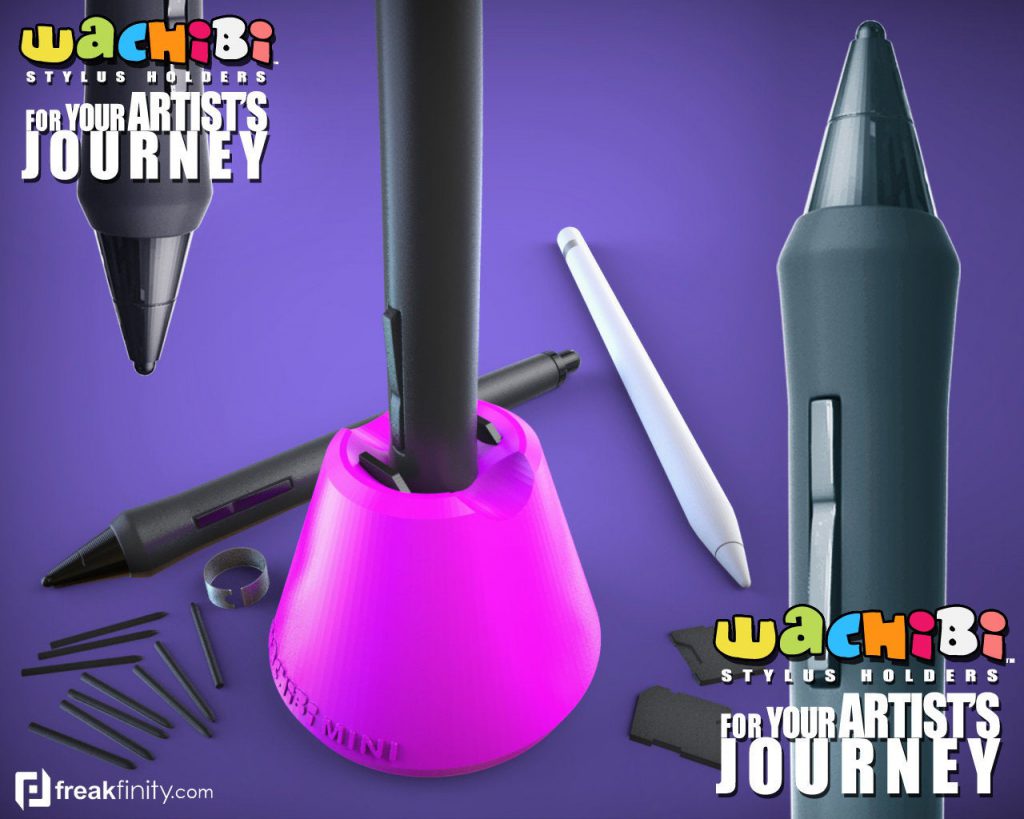 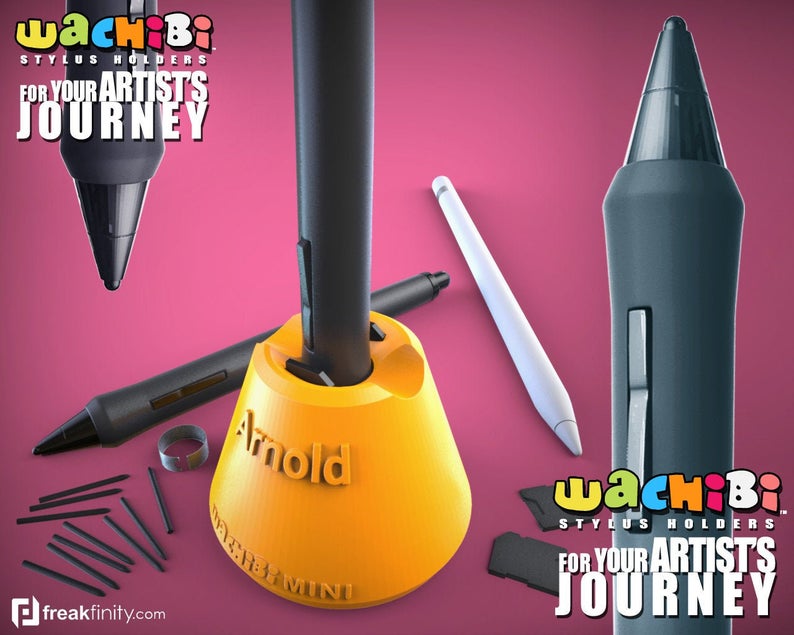 Keos Masons is an outsourcing company that provides character modeling and concept design services for the video-game, movie and collectible industry. The company was founded by Marco Plouffe and Cédric Séaut. 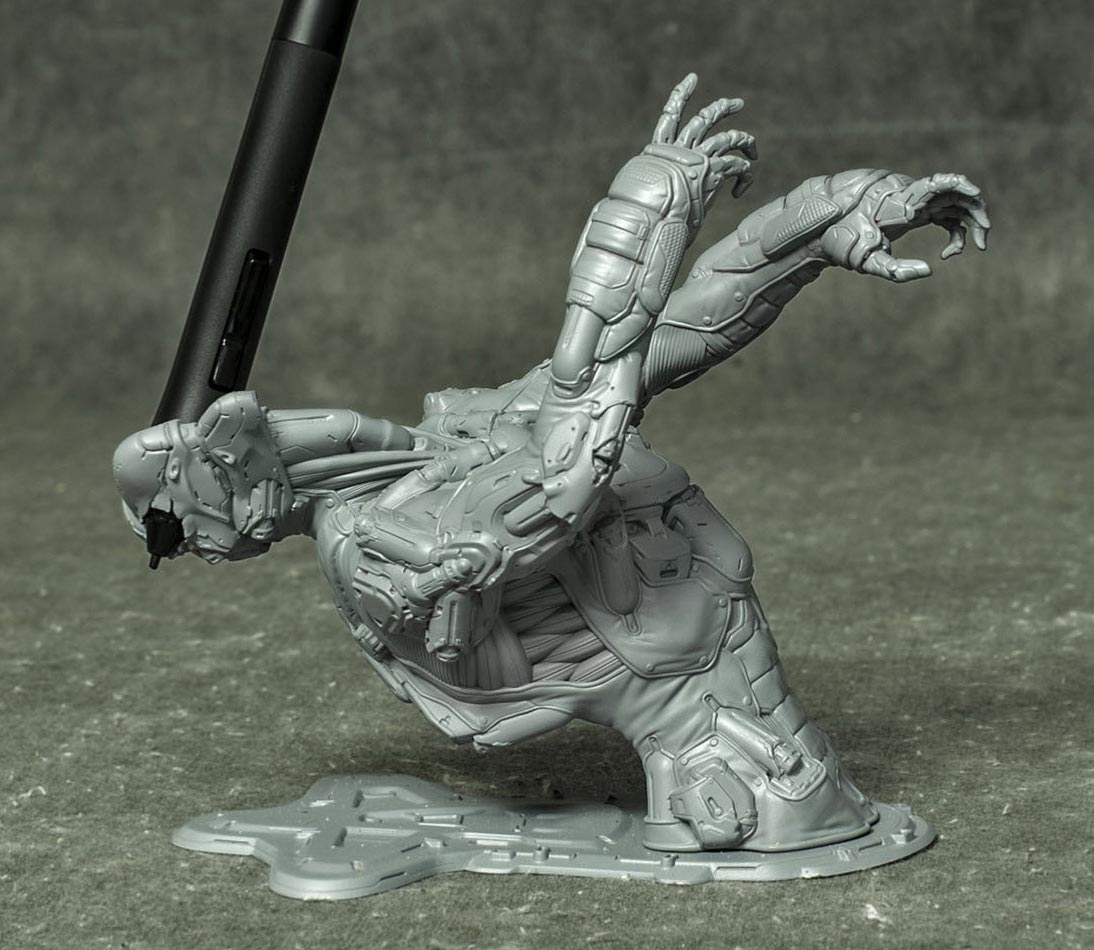 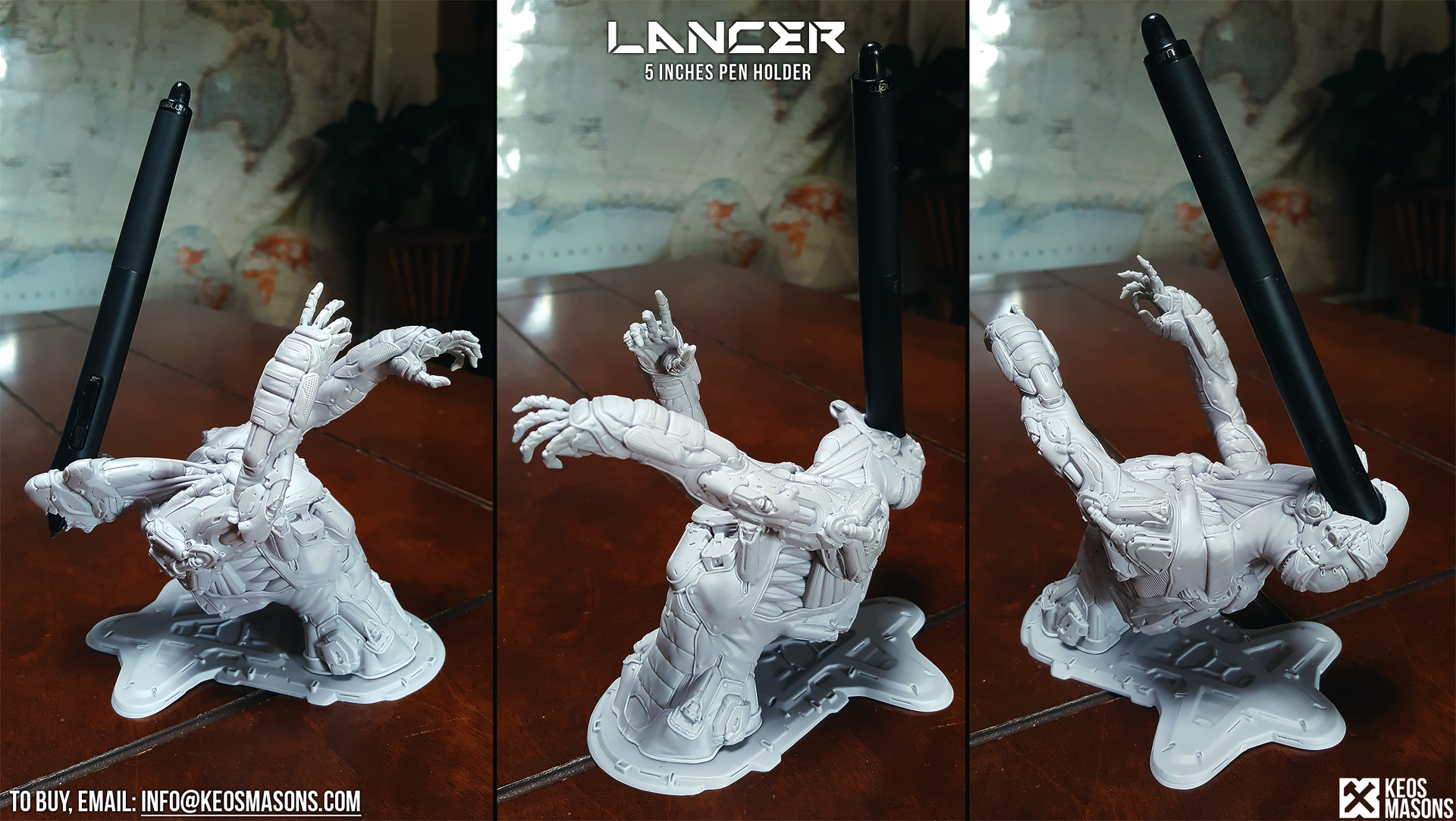 Lancer (Pen Holder) is available to purchase on Keos Masons’ website. Unfortunately, at the time I write this article, Lancer is sold out. You can reserve your copy for free and they will contact you when it becomes available again.
If you like this design, you should let Keos Masons know! I hope they will print more figures of Lancer soon! 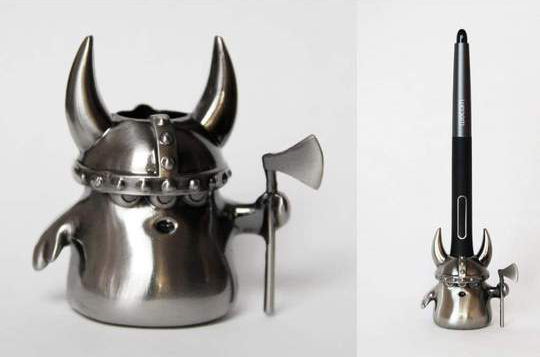 That’s another cool (and cute) design that got my attention. It’s made of solid metal zinc alloy.

Originally Embla started with a collection of candles, now they are also creating other awesome products. Their creations are mostly inspired by the Scandinavian aesthetic.

When I was searching for stylus stand I spotted a few ones that aren’t available to purchase in a physical form, but as files, ready for 3d printing.
Some artists have created a pen holder for themselves, not to sell, but their design is so awesome than other people also wanted to have such stylus stand.

These artists may not have the time or equipment to produce such stands and sell them as printed figures, but they provide us the 3d files for print and their support to us. We can print these holders on our own (if we have a 3d printer) or just need to find a 3d print company.

Also, when you dig around on the internet, you can fill some awesome designs that you can download as 3d filed ready for printing for FREE. 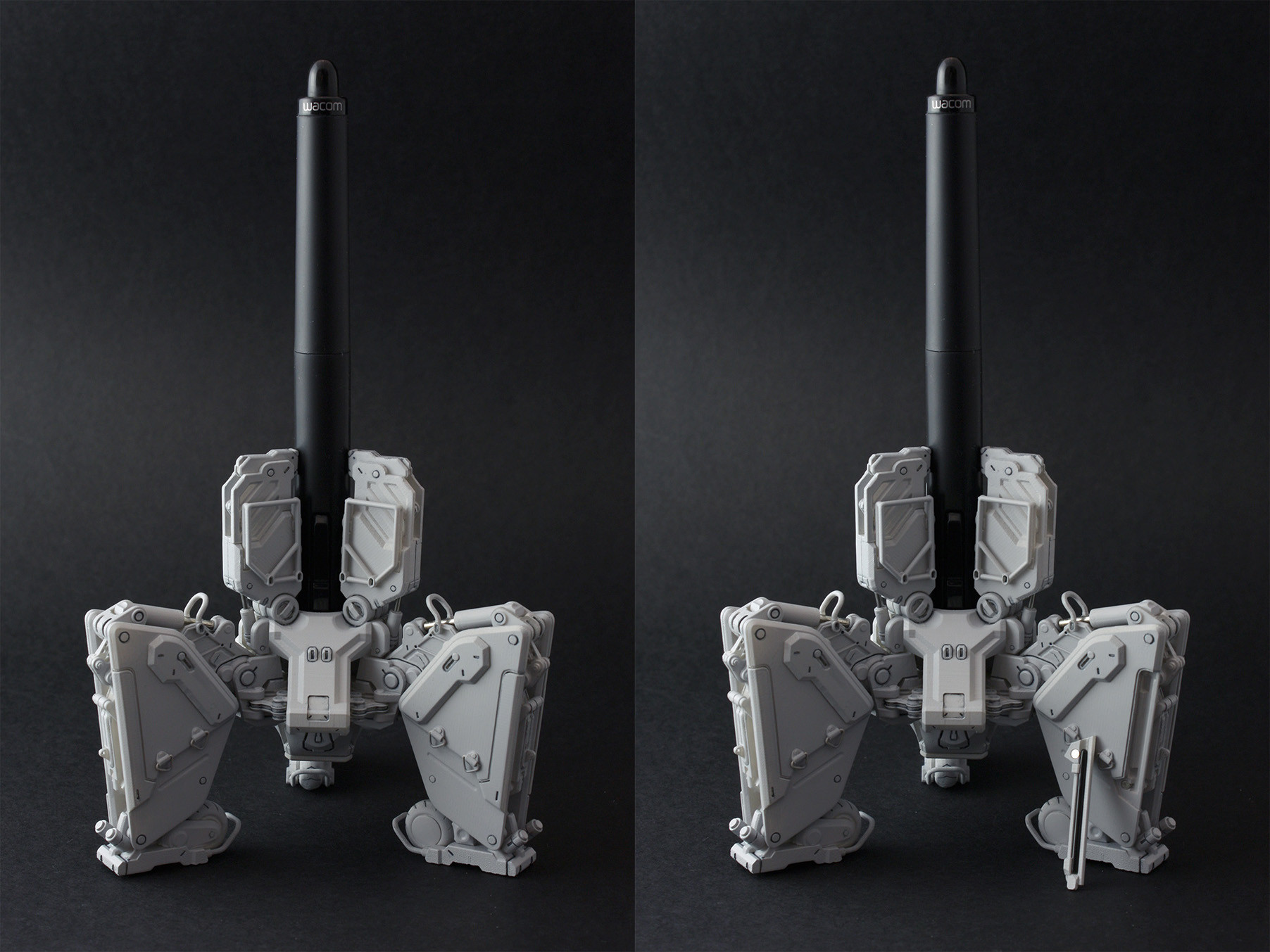 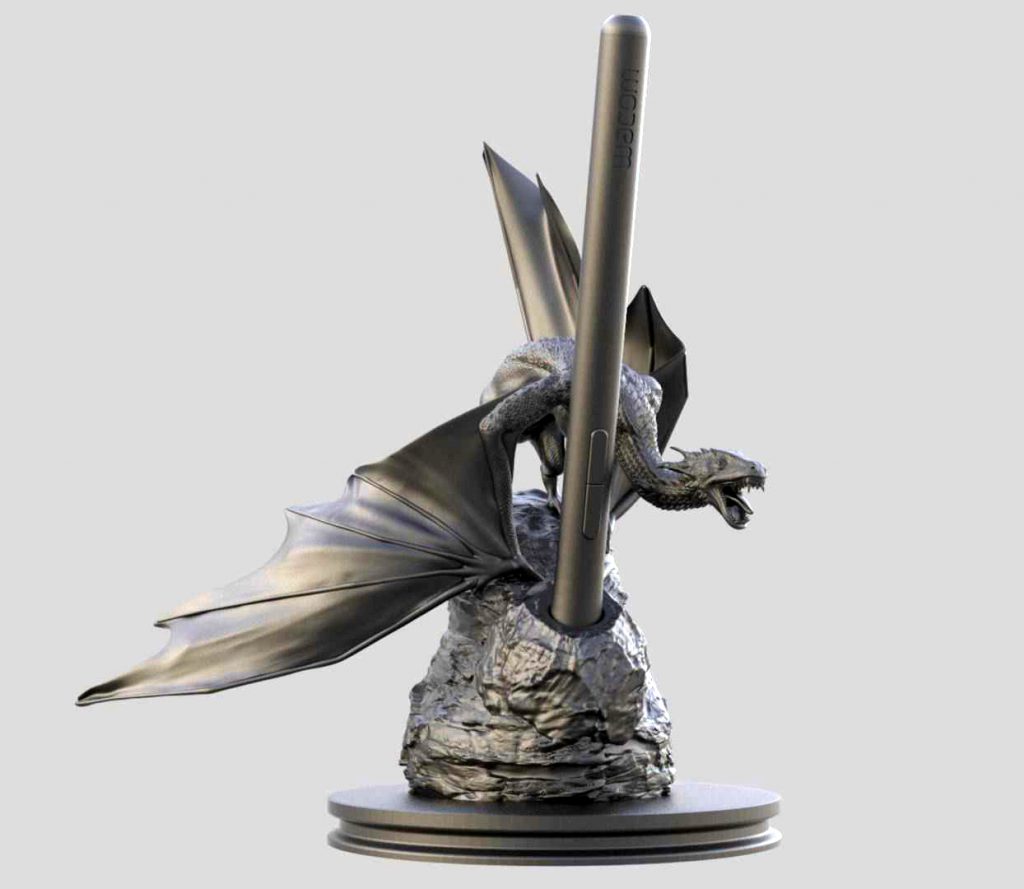 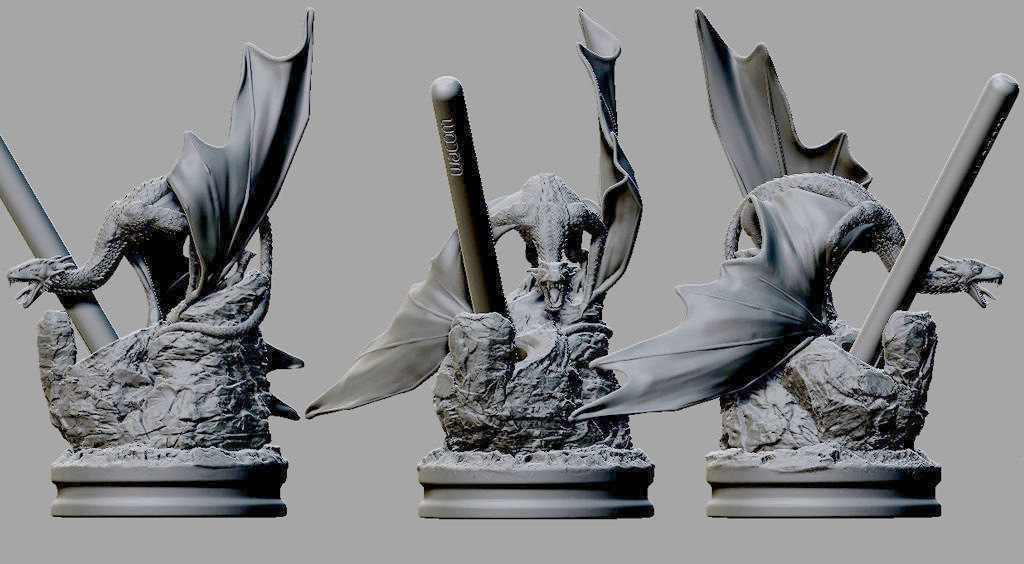 Check out the price – Splash on ShapeWays.com (3d files ready for print)

Not for sale yet, but they are epic!

I need to include these designs although they are not for sale YET.

So check them out, and give a like/leave a comment to let the artists know how awesome their design is! 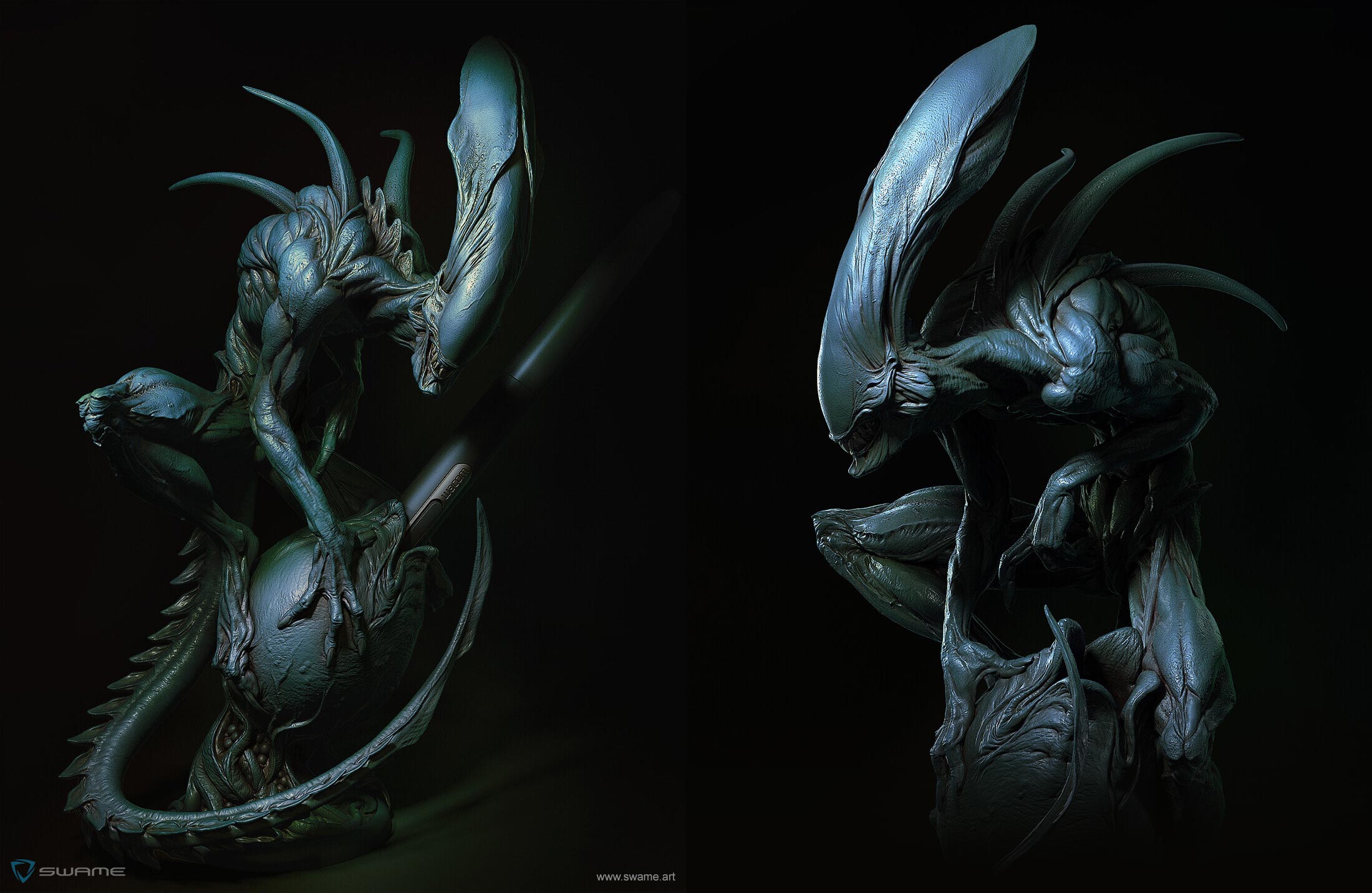 Check out the Swamp Alien Pen Holder on Artstation

I’m super hyped seeing this design, the rendered sculpture looks so cool! It was also printed, and it still looks amazing even without being painted over. I’ve scrolled through the comments on its Artstation page hoping that I will spot a link where we can purchase the pen holder or 3d files for print. Someone already asked for it, and there’s what the Same Studio said.

Swame Studio’s reply:
At the moment, the sculpture is not for sale. But we are looking for ways to sell sculptures.

I hope they will make it available for purchasing someday!

Another cool design, It was a project done in 4 days for a contest that Rafael Ussuy did at the studio where he works, the objective was to make a pen holder from what inspires the artist.

Rafael was inspired by Zhelong xu, @ChenSkink, and Paul Braddock’s works, creating this awesome design. He plans to print it next year and will post the results on his Artstation page, so better sign up to the Artstation and follow his account!