What are different types of pencils? What’s the difference between them?

Probably no Artist can imagine a life without a pencil.

It’s just an ordinary thing (like a rubber eraser, which I will write about another time), however, there are many pieces of information about pencil many people don’t know. Do any of you know the history of a pencil? Or how pencil is made? If not – I encourage you to read this post.

What is a pencil?

Briefly, pencil is a tool for writing on a paper or wood. It is characterized by black or gray color and a possibility of erasing the applied with its help inscription.

Most often used pencils are the ones marked with HB symbol ( or F ). HB means “hard and black”.
Pencils with a larger amount of graphite are marked with the symbol B, B2, B3 etc.
while pencils with more kaolin are H, H2, H3 etc. The higher the number near B is, the larger amount of graphite has the pencil. And vice versa, the more kaolin the pencil has, the higher number next to H symbol is placed.

Graphite pencils are a gradated mix of graphite and clay that allows artists to draw realistic images, render expressive lines, make light guidelines, and more with tremendous versatility. Those pencils may wear down slightly faster than some other pencils due to their softness

Solid graphite pencils ( also called woodless pencils), are mostly used for art and drawing. While a standard pencil is a thin core of graphite (well, graphite mixed with clay, generally) inside a wooden body, a solid graphite pencil does away with the wood.

Liquid  Graphite Pencil is a product that allows you to create authentic graphite pencil effects and pencil sketches using a liquid. There are different shades of graphite pencil.
One of most popular are Derivan liquid pencils. Derivan provides us six different shades: red, blue, yellow, grey3 and grey9. They can be easily thinned with water. The Liquid pencil can be applied with a brush, nib, or other art tools

Liquid graphite was used also as a “Liquid Lead” in a ballpoint pen, which was developed by Don Doman and “Scripto pen and pencil company” (you can read an article about it here). The Liquid Graphite in a ballpoint pen made the writing erasable – which at that time was consider so innovative that it was exhibited at the Institute of Modern Art, in New York City.

There are different styles of charcoal pencils. The pencils presented in the photo are: Wooden Charcoal Pencil, Paper Wrapped Charcoal and White Charcoal Pencil. Charcoal produces rich tones and high contrast. This particular pencil is more brittle than other pencils, it smears easily. It’s easy to fade charcoal or wipe it off the paper entirely if you make mistakes. A rough texture may allow more charcoal to adhere to the paper
The charcoal was used by many famous artists, including Leonardo da Vinci, Michelangelo, Georgia O’Keeffe, and Ernst Barlach. Charcoal pencils are often used in photorealistic drawings, and other fine and detailed drawings, while keeping the user’s hand from being marked

Carbon pencil has a combination of charcoal and graphite. Natural carbon is divided into hard (from charred wood chips) and soft. The soft one is created by burning thin twigs (willows, vines, linden, boxwood etc.) with limited air access. Carbon pencils have a consistent softness, for superior blending and texture – they leave a thick, hard line to erase.
These pencils are usually made of a mixture of clay and lamp black, but are sometimes blended with charcoal or graphite depending on the darkness and manufacturer. They produce a deeper black than graphite pencils, but are smoother than charcoal. 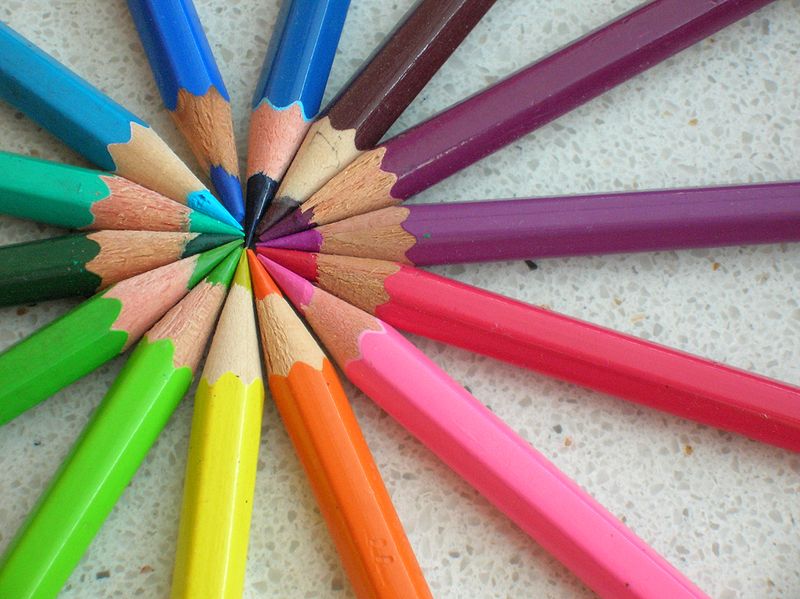 A writing and drawing instrument made of colored pastels, charcoal, chalk or other material.

Those pencils are often used for drawing and coloring by children and architects. They are simple to use, non-toxic and available in a wide range of colors. Unlike graphite and charcoal pencils, colored pencils’ cores are wax- or oil-based and contain varying proportions of pigments, additives, and binding agents. Water-soluble (watercolor) pencils and pastel pencils are also manufactured as well as colored leads for mechanical pencils.

Among the available colors, there is also a white pencil. Artur Grottger created the famous series of drawings with white pencil. In addition, a white pencil can be used to lighten darker colors or give a shadow to the created drawing. 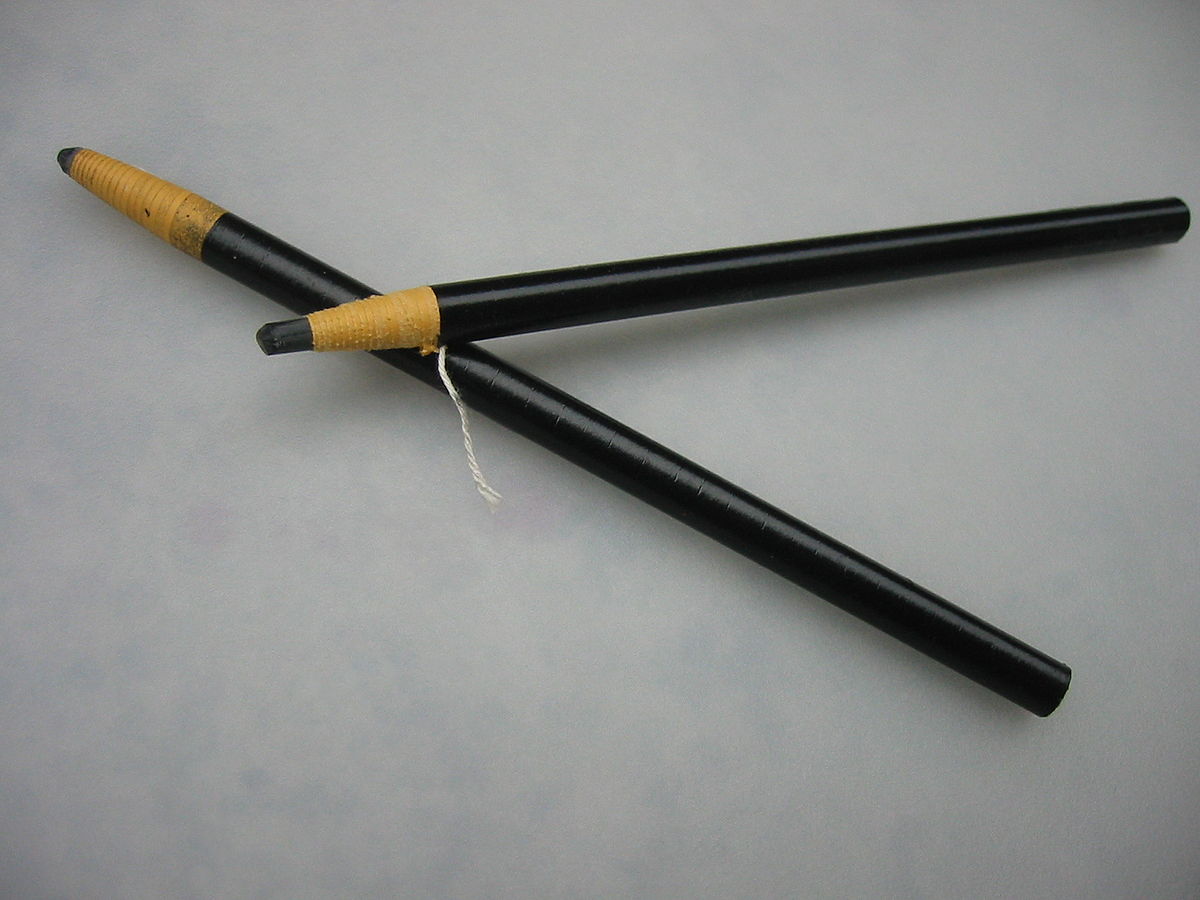 The grease pencil is a wax writing tool also known as a wax pencil, china marker or chinagraph pencil (especially in the United Kingdom). It is a writing implement made of hardened colored wax and is useful for marking on hard, glossy non-porous surfaces. Such surfaces include porcelain, glass, rock, polished stone, plastic, ceramics and other glazed, lacquered or polished surfaces, and metal, as well as the glossy paper that is used for photographic printing (particularly for contact sheets), x-rays, and for marking edits on analog audio tape and film. Due to its ability to write on glass, it is often used in chemistry labs to mark glassware. It is also used to label theatrical lighting gels. Additionally, it’s often used as a construction or handyman’s marking tool as it rarely scratches the surface it is used on. It may be used to mark a wet surface. They are also favored by some traditional artists.

Watercolor pencils, otherwise known as water-soluble pencils, are a versatile art medium. The pencils can be used dry—like normal colored pencils—or they can be applied “wet” to get the desired watercolor effect. In wet application, the artist first lays down the dry pigment and then follows up with a damp paintbrush to intensify and spread the colors. This technique can also be used to blend colors together, and many artists will apply both techniques in one art piece. Artist-grade watercolor pencils typically come in 60 or 72 colors with a few 120 color assortments.

Mechanical pencils are produced with a plastic or metal frame similar to a ballpoint pen.
These pencils use replaceable graphite cartridges, which, as they wear, are extended further.
Automatic pencils allow you to use thinner graphite bars, and as a consequence, obtaining much thinner lines.

A special pencil, currently rare, which was applied after wetting the pencil core (eg with saliva).
It was invented it in 1857 by K. Puscher, patented July 10, 1866 by Edison Clark. The core of such a pencil is made of abrasive clay (not subject to baking) soaked with water-soluble dye, e.g. methyl violet; it left traces resistant to abrasion with an elastic band. The entries in the documents were made with such a pencil, in which each entry should be indelible and leave a permanent mark – e.g. in financial documents – at times when it was not yet known or not quite popular – a pen, and fountain pens were not available to everyone because of the price. The copying pencil was sensitive to moisture (the dye blotted and run off), this was a significant disadvantage compared to graphite pencils;
on the other hand, also the entries made with plain ink were equally sensitive to moisture – in the nineteenth and early twentieth century, there was no cheap way to quickly make permanent notes resistant to moisture.

You can write with a copying pencil – besides paper and wood – also on another substrate, e.g. on the skin. Formerly commonly used in copy pencils methyl blue is toxic, so there have been cases of tissue necrosis contaminated with this dye – usually burns occurred oral mucosa (from frequent salivation of the tongue or from the pencil) habit to keep its end in the mouth) or eyes (e.g., from eye contact with specks of the pencil core).

How pencil is made

In the initial phase of production, it is necessary to crush graphite, however, you can not do it in an ordinary grinder.
Devices are used in which under the influence of compressed air pieces of graphite collide crushing each other.
Powdered graphite is mixed with kaolin and water until the consistency of putty. In order to form the right shape, graphite is forced into a small tube. It comes out as a molded rod. Then the rod is cut into pieces and it is roasted at 1200 degrees Celsius.
A piece of graphite is waxed and then placed in a wooden frame. The wood for the holder must be soft so that it can be easily touched, when graphite is written. The wood is cut into pencil-length slats, width a few pencils and the thickness of half a pencil. Slots are grooved in the slats and put graphites in them. Next, it is glued from the top, the same slats with grooves. Such a piece is then cut into single pencils. In the last phase, the pencils are painted and optionally provided with an eraser.