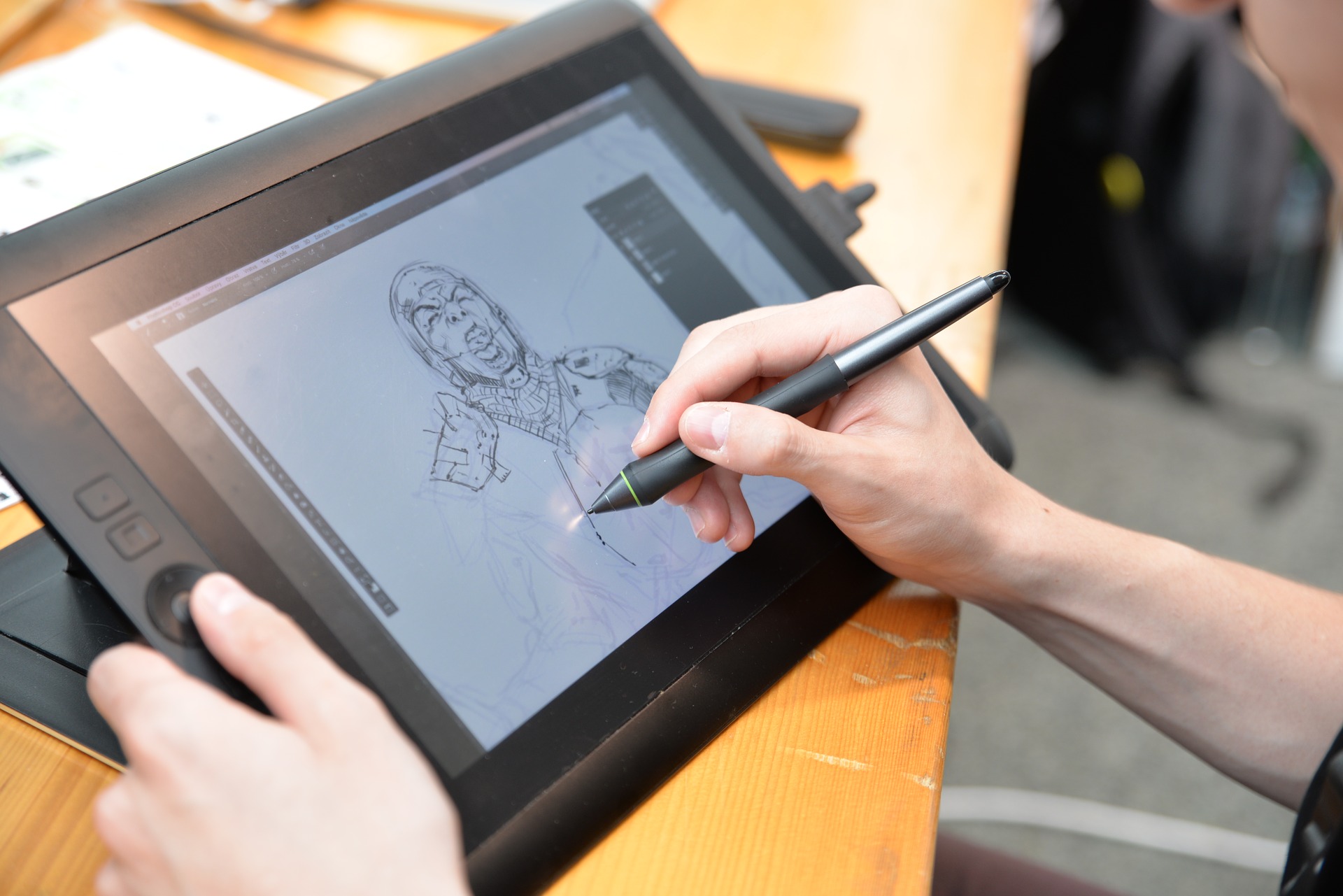 Graphics tablets are a quite new drawing tool that started to compete with traditional media (pencil, paint) more than 10 years ago. At that time, it was just an interesting gadget for geeks, but nowadays, this tool is used and known almost by every graphic designer and illustrator. If you are a beginner digital artist who wants to buy a graphics tablet, in this article you will find pieces of information that explain the parameters you have to pay attention while purchase and therefore will help you to choose the right graphics tablet for yourself.

What is a graphics tablet?

Graphics tablets are useful tools at work, especially in this precise and demanding quality. They are especially useful for illustrators and graphic designers.

Graphics tablet, also called drawing tablet or pen tablet, is a hardware input device that enables an artist to draw or sketch digitally using a pen or stylus. Graphic tablets can be used in place of a mouse. They use the fluid motion and natural positioning of the human hand to its best advantage. Using a graphics tablet is as easy and as comfortable as using a pen, pencil or airbrush, as the case may be, and they are being used in more and more industries.

The graphics tablet is a very useful tool for illustrators, animators, graphic designers and photographers. The ability to pick up a “pen” to direct drawings or mouse movements is a much more natural way of drawing, painting and moving a cursor around.

But graphics tablets are not only used in art. They can be useful for architects and engineers. Doctors can write prescriptions and orders with a few clicks and sign them right on the screen. The graphics tablet can be used by teachers and professors, businesspeople, cartographers, geophysicists and civil engineers.

How to choose graphics tablet?

Answer of this question depends on what are you going to use it for. Since it is an art blog, we will focus on graphics tablets for artistic purposes.

We will describe what parameters of the tablet affect its usefulness in the work of the graphic designer.

Using the mouse or trackpad, when you move the cursor, its movement begins at the place where you last left it. In other words, it moves in relation to the last position.

How big the work area should be?

Most graphics tablets have a much higher resolution than monitors. Normal monitors usually have no more than 3,000 lines over their entire width or height, but better graphic tablets have a resolution of 5080 lines per inch. Thus, for most monitors, even a small tablet has more resolution than necessary to control each pixel on a typical 27-inch display (2,560 by 1,440 pixels).

Work with a large tablet.

In case you are used to creating art on canvas or paper and you like big long movements that move the entire hand, a Large size tablet can be just for you.

But the big size has its price and it’s not just about money. Big tablets are much bigger than a mouse pad, so you have to make a lot of free space on the desk so that it can be put where it is and it can block access to the keyboard. The next “problem” will be transport, if we would like to go with it to a friendly agency to work there.

Work with a small tablet.

If you travel a lot and want to work in various places, such as cafes, libraries or friendly agencies, a small tablet will give you the greatest comfort on the topic of carrying it and the space requirements to work. It is easy to put it in a laptop bag, not only because it is small, but also because, like all tablets of this type, it is flat. On a laptop or monitor screen with a modest resolution such as 1920 x 1080 pixels, small tablet dimensions are all you need.

A small tablet is often more than enough for a layout, or when most of your graphics editing includes checkpoints, transformations, etc., or for example for photo retouching. When you want to work with greater precision, simply enlarge the image on the monitor, or use the precision mode on the tablet.

Work with a medium graphics tablet.

Although a small tablet can have more than enough resolution to precisely control the cursor on multi-sized displays, it does not mean that it is always just as easy for a human to put a pointer in the right place. In case the size of our monitor starts to grow, it may turn out that it is increasingly difficult for us to control the indicator and we have to make very small and precise movements. If you want to control the precise movement of the pointer more easily, but a large tablet tires your hand and you do not want to take all available space on your desk, the medium-sized tablet remains the solution for you.

The resolution of the graphics tablet is given in lines per inch (lpi) and tells us how many independent lines are in every inch of the width or height of the work area. In theory, the higher the resolution, the more precisely we can work, and the more detailed our picture can be. In practice, however, we may not need the highest possible resolution at all.

In summary, the most popular resolution of 2540 lpi is more than enough for precise work.

What is the pressure sensitivity?

A simple experiment. Just take the pencil and, by pressing harder and weaker, draw a few lines. Those that have been made with a lot of pressure will be clear and thick, with a strong color. Drawn lightly with a pencil, they will be gentler and less intense.

The graphics tablet reacts similarly. Today’s pens can read up to 8192 levels of pen pressure.

What pressure sensitivity do I need?

What is the tilt recognition?

This feature, e.g. of the Airbrush tip and eraser, senses the amount of tilt between the tool and tablet. This is used to create natural-looking pen, brush, and eraser strokes in applications that support tilt-sensitivity.

The standard values in which this function operates are ± 60 levels.

What is the report rate?

It is nothing but the frequency with which the graphics tablet reads the position and pressure of the pen and then sends this data to the computer. If the reading speed would be low, we would receive a broken line with very fast movements on the screen.

Currently, the standard is 200 rps (reports per second), or 200 Hz. Anything around 200 rps (or higher) is great and most tablets fit this description.

By the interface we mean the way the graphics tablet connects to the computer. We distinguish wired interface: USB, and wireless: Bluetooth.

Tablets with a built-in lcd screen can also have an HDMI or Display Port and if the tablet works as an independent workstation, it should also be equipped with WiFi and headphone output.

Graphics tablets with display can be divided into two groups: those that require connection to a computer for work, and independent workstations.

The tablet from the first group when connected to a computer will be detected by the operating system as an additional monitor. Then our tablet works as a very sensitive and precise touch screen. Thanks to the fact that you have a direct transfer of the stylus’s position to what is happening on the screen, while working in the graphic program you can get the impression that you create on a piece of paper.

The second group of tablets are in fact portable computers with a touch screen. When connected to a computer, they can work just like ordinary tablets with an LCD screen. The biggest advantage of these graphics tablets is that you do not need a second computer to work with. Especially it is useful when you travel a lot and you like to create while traveling. For this reason, when choosing a tablet, it is worth paying attention to the battery life.

When choosing a graphics tablet with a built-in LCD screen, first of all, take into account the parameters of the display, such as: resolution, color reproduction, viewing angles, contrast. You can read more about this topic in the article about monitors for graphics design here “How to choose the right monitor for graphics design“

Today’s tablets are equipped with a few additional buttons that can significantly facilitate and make work with the tablet easier. In addition to the touch ring, the tablet should be equipped with programmable buttons, which functionality can be adapted to your needs.

Typically tablets with a built-in LCD screen are powered by mains voltage and are equipped with a battery that allows you to work where we do not have access to a power outlet. A standard graphical tablet is most often powered by a USB cable, which is connected to a computer or laptop. If the tablet allows you to work in wireless mode via bluetooth, it also has a battery that powers the device in this mode. It is good to pay attention to the battery life when purchasing.