Here’s the situation:
Perfect day and a perfect time for drawing. You take your sketchbook, favourite pencil, sit in a comfortable chair next to the table where you placed your daily dose of coffee… and when you finally grip your pencil, you just keep staring at the blank paper without having any idea what to draw.
Do you know this feeling? Yeah, it happened to me a lot. 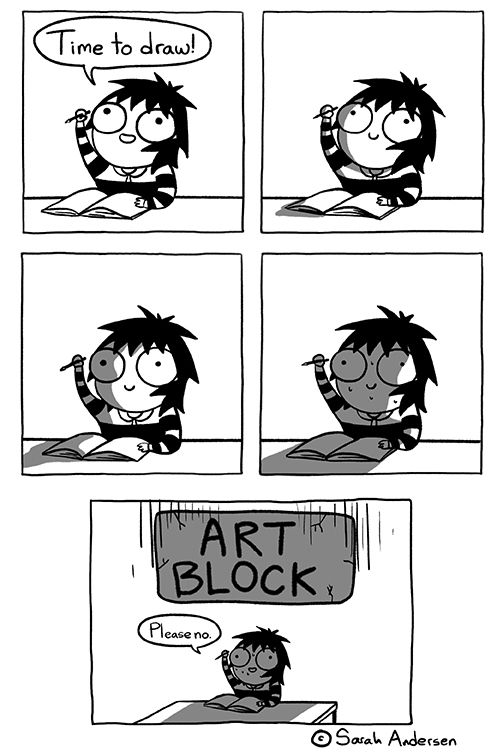 So, what exactly is that Artblock?

The top definition on Urban Dictionary says:
“It’s the worst fucking thing for an artist to ever encounter. It’s when you run out of ideas to draw things off, and temporarily loose all motivation to do anything art related.”

Aaand here’s another definition which is rather offensive:
“A sad excuse for lazy artists who can’t be bothered to draw”

Which one is more adequate?

I’ve checked the wikipedia while making quick research, but unfortunately, there’s no page for this term. However, there’s a description of “Writer’s block“, which seems almost the same as the Artblock. And, oh boy, it’s pretty serious.

The Writer’s block (Artblock for writers)

It was described for the first time in 1947 by psychoanalyst Edmund Bergler.

Briefly saying – It is a condition, primarily associated with writing, in which an author loses the ability to produce new work, or experiences a creative slowdown. The condition ranges from difficulty in coming up with original ideas to being unable to produce a work for years.
It’s a problem that many professionals struggle with, including Adele,  Charles M. Schulz and Herman Melville.

Many people tried to find a cause for this problem. Here are some interesting, suggested reasons which may be sabotaging your work.

1. A writer may run out of inspiration, or be distracted by other events.
2a.  Blocks may be produced by adverse circumstances in a writer’s life or career: physical illness, depression, the end of a relationship, financial pressures, or a sense of failure.
2b. Mental health: the block may be the result of brain activity being disrupted in particular areas.
3.  Writer’s block may also come from feeling intimidated by one’s previous big successes.
4. Lack of knowledge (I will explain it below).

That are some of the causes which were mentioned on the Wikipedia page of “Writer’s block” (I recommend to read this article). I’ve decided to put 2b as a separate subpoint because that’s a statement made by a neurologist Alice W. Flaherty, which needs a bit more explanation:

“Under stress, a human brain will “shift control from the cerebral cortex to the limbic system”. The limbic system is associated with the instinctual processes, such as “fight or flight” response; and behavior that is based on “deeply engrained training”. The limited input from the cerebral cortex hinders a person’s creative processes, which are replaced by the behaviors associated with the limbic system. The person is often unaware of the change, which may lead them to believe they are creatively “blocked”.”

The next cause I wanted to eplain more is the “Lack of knowledge”. Later, on the Writer’s block wikipedia page, there’s an issue between teachers and students described.

“Students receive little or no advice on how to generate ideas or explore their thoughts, and they usually must proceed through the writing process without guidance or corrective feedback from the teacher, who withholds comments and criticism until grading the final product.”

I’ve watched the work process of a few digital artists, and it all looks similar – the first thing what they do is the research. They collect as many photo reference as they need, so they could use them in the next step of their work.

Okay, we may know what causes these block, but how to overcome an artblock?

I’ve seen of course some solutions for the artblock. Here’s the list:

1. Find inspiration. When I don’t feel motivated, I usually go to such sites like Artstation and browse through the awesome work of other artists. Sometimes, they post their work process. It really helps to see their work being a mess at the beginning – I’m not so much frustrated when I start to draw, and my art is not perfect at the beginning as I want it to be. It takes time.

2. Find the idea. Sometimes, all you need is an idea. There’s a site called ArtPrompts which generates many cool ideas or you to draw! You can pick one of many categories, such as  “character”, “creature”, “environment”, “object”.
Here’s an example (generated idea for a character) “His inner demon manifested itself.”

3. Exercise physically. We tend to sit for many hours a day, and forget about the importance of exercise. Take a break, and move your muscles a bit. Get fresh air. It helps to get more focused on the work.

4. Doodle / Warmup. Stop being a perfectionist, and try to draw some random stuff that pop into your mind. It doesn’t have to be pretty. Sometimes we just need a warm up. Treat it as training – It’s much better than not doing anything.

5. New tools. Drawing for long hours may be boring sometimes, so make it more fun and try using some new tools/techniques 🙂

6. Art challenges. Here’s a list of art challenges. Not only they will help you deal with your art block but will also help you improve the drawing skills.

7. Join an art community. Share your drawing with others, ask for feedback and help other artists! Here’s a list of online art communities.

Do you have any other ideas on how to deal with an artblock? Let me know!