Skip to content
Menu
HomeEquipmentHow to record a speedpaint

Do you want to start your own art channel? Here you will learn what are the best ways to record yourself drawing digitally, and which software is best for recording your drawing process.

Recently I was looking for a screen recorder to record my own drawing process. Till this time, I was just live streaming on Facebook, downloading the live stream recordings and combining them into one file (speeding up the process, adding music etc.). Drawing takes many hours, so originally I just wanted to spend them working on my art and occasionally chatting with my friends via Facebook.

I never had a YouTube channel, so I decided it would be a good idea to create one, and post my videos there.
Unfortunately, the quality of the videos I recorded via facebook is not good. I didn’t care about the quality before, since my original intention was just to chat with my friends, and the video was created just for fun. Here’s an example of one of my recorded drawing process, so you could understand what I’m talking about:

Kudos to my friend Mateusz for the music, you can check his other works here: https://soundcloud.com/homeomorphic

As you can see, the quality is not good enough. That’s not something I want to post on my art channel. So, I decided to dig in the topic and learn as much as I can, answering here all the questions I had.

About Speed paint and Timelapse

While browsing through YouTube you may encounter such terms as speed paint and timelapse drawing. Below you will find an explanation of those terms and learn what are differences between them.

What is a speed paint

Speed painting is a drawing/painting technique where the artist has a limited time for creating artwork, and usually, it takes from a few minutes to several hours (yes, an illustration that took 2 hours is also considered as a speed painting).

Speed painting is often used as a form of exercise (ex. for practicing drawing portraits, it’s good to draw often speed paints of faces in different angles, to better understand the structure of face), searching for new concepts (compositions that can be used later for bigger projects), or warm-up before starting the main illustration.

What is a timelapse?

A technique that allows you to see processes that are too slow for human perception. It involves taking pictures in (relatively) large intervals and then displaying them at an accelerated pace. In this way, processes lasting in reality for hours or even days can be seen in a dozen or so seconds.

What is the difference between a time-lapse and a speed up video?

Time lapse involves shooting frames at a speed much slower than the standard (let say 16 frames per second), perhaps as slow as one per day or much faster perhaps one per second. Then playing the frames at a normal rate of 16 per second or somewhat slower. The time acceleration is the viewing frame rate divided by the recorded frame rate.  This is for compressing long events into a short movie.

Speed up video involve shooting at a normal frame rate (say 16 frames per sec) and playing back at a faster  rate (say 32 frames per second) or even playing every other frame. The speed up ratio would be the new equivalent frame rate taking into account the decimation divided by the original frame rate.

How to record a speedpaint

It all depends on what device and software you are using, but mostly – do you draw traditionally or digitally? I will split this topic into two because if you are an artist that uses traditional media, you have to tackle this task in a different way.

I’ve tried to record my own painting process on canvas and it wasn’t easy for me as recording myself drawing digitally. At that time I didn’t have a smartphone, but I was lucky enough to get a camera.
I used to place the canvas on a floor and set up the camera right behind me. It wasn’t comfortable, since I had to watch out to not to cover the image with my head, and the camera could record videos up to 20 minutes. So I had to additionally keep that in mind, and start the recording again after 20 minuter, otherwise, I would miss a part of the process.

Right now there are more options, and here are a few tips and tools you can use for recording your traditional drawing process.

1. Recording with your smartphone

Technology constantly develops, and now you can buy smartphones with really good cameras. Most people have smartphones that are capable of recording videos in great quality, so all you need to have is a few additional tools that will make the recording easier.

I’ve looked on a few place holders/tripods, and the holder made by Benks is one of the most recommended tools. The bendable arm is strong but flexible enough and doesn’t jiggle around or slide out of place. It can be clamped to the edge of a desk.
One of the Amazon’s opinions says that the stand started shaking a bit due to the movement of his my hands so it’s recommended that whoever is buying this for recording art puts it on something other than the desk you’re using. Perhaps a stand right next to your desk.

She recorded a video showing her recording setup, you can check it out here.

Proper light is the second most important thing you have to remember about. In a bad light, the colors of your painting won’t be correctly recorded – they will seem dull, or too dark. Unless you are plein air painting, you should get a lighting set. 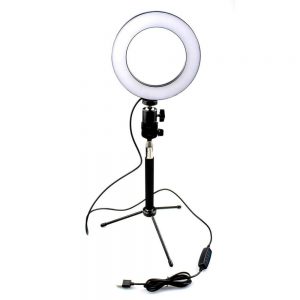 Many YouTubers often use a ring light. Ring lights are not only great for make-up artists, or for making professional makeup photos. Using such lamp does not require any special knowledge about photography and lighting, and you don’t need to have any advanced camera.

On the market you will find Freepower ring lamps with a capacity of 28W, 40W, 65W and sometimes also 22W. The size and power of the ring lamp should be chosen taking into account the size of the photographed object and the assumed distance between the lamp and the plan – naturally, with the increase of both factors, the lamp with a higher power and diameter will perform better. All lamp models emit light with a color temperature close to daylight – 6400 K.

Even when you use a smartphone or camera to record your traditional painting process, you can use a recording software to tweak up your video recording a bit (for example, add your channel logo),

However, you need an additional device called a capture card. 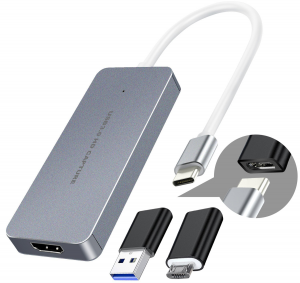 Capture card is an internal or external device that connects from the computer or device to a video camera or similar device capable of capturing a video signal. The video capture device is then capable of taking that video signal and converting it to a stored video format, allowing you to store, modify, and show video on a computer.

What’s the point of doing it? Well, it will allow you to add your own logo, webcam, microphone commentary and record video to your local disk or live stream to popular services. You don’t have to post-edit your recording.

How to record digital painting process or speedpaints

Recording the process of digital painting is much easier in my opinion than recording the traditional drawing. Of course, there are artists like Ross Draws who like to record with a camera to show their graphics tablet (I’m so envy of Ross’ tablet, it’s huge!). You can watch an example of his videos here.
I’m aware that not everyone has a possibility to get such an awesome tablet, so let’s stick to more cheap options.

Let’s assume that you at least have a laptop, a graphics tablet (mouse is also fine) and a graphics software – don’t worry, it doesn’t have to be a Photoshop, here’s a list of free graphics software. In this case, everything you need is a screen recording software.

What’s a good recording software when you draw digitally? 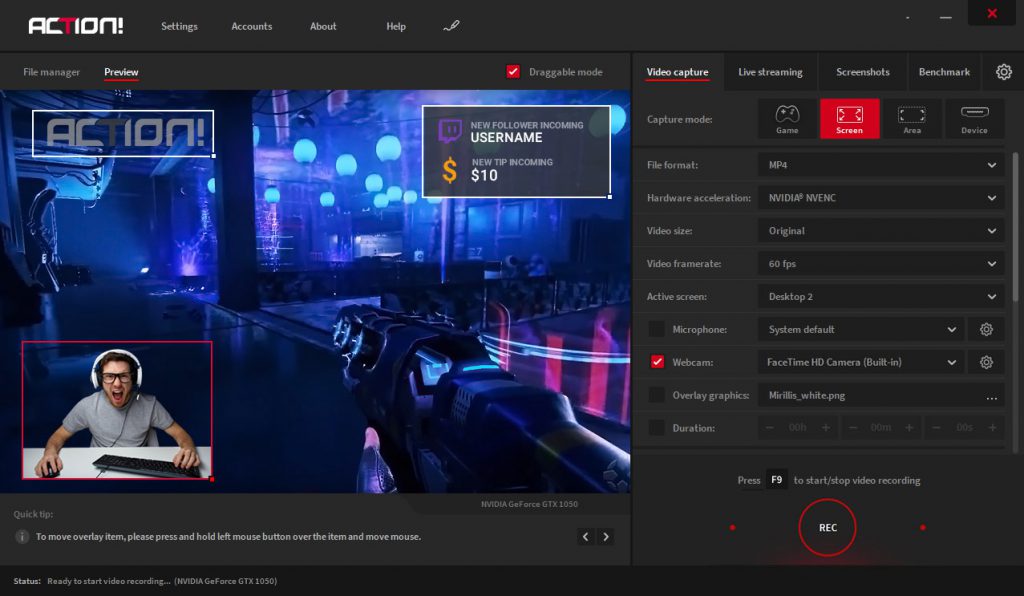 Mirillis Action! is software that suits my needs the most of all screen recorders I used in the past.
It lets you record and stream everything you see and hear on your computer, including games, dashboards, applications, music and videos from any website.

It’s quite popular among gamers, it has some advanced options which I personally don’t use: benchmarking, recording audio to a separate file, mouse clicks effects, or the drawing panel. What I like the most about this app, is that despite its advanced options, it’s really easy to use. Like, totally, just one click and you are already recording.

Useful options to which you should pay attention as a digital artist:

This screen recorder It’s paid, but it’s a one-time payment – you don’t have to purchase any additional services, or you don’t have to buy this software again every single month/year or update. Which is great, because the software is often updated and the developers constantly add new options. They have also a trial version, where you can use the software for free for 30 days.

In case you are interested in purchasing it, I managed to get a  25% discount code.
To use it, click here: Action! discount code
Code: brushwarriors

*check “I have a discount coupon” box, and paste the brushwarriors code. Click ‘enter’ on the keyboard to reload the page and get the discount. 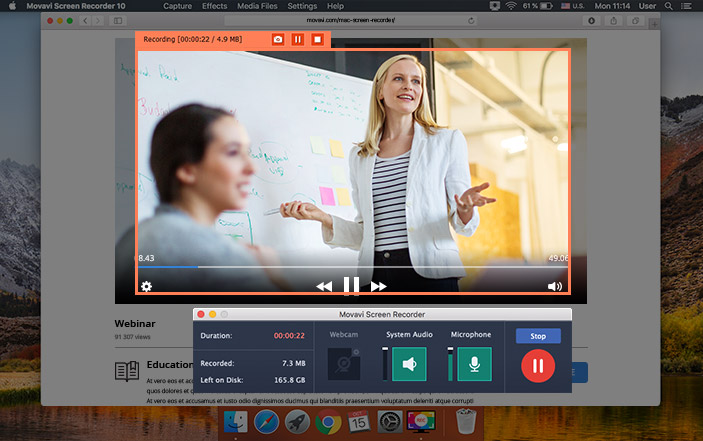 I’m aware that not everyone has Windows system (and unfortunately, Action! works only on Windows) so I’ve looked for a software that can be used on Mac.  Movavi screen recorder received many positive opinions, and it’s options are similar to Action!’s (it doesn’t have as advanced options, but the basic ones will be enough)

Movavi Screen Recorder lets you grab any screen video from your Mac with a single button click. Capture webinars, live streams, speed painting, Skype chats, and anything else you like. Create GIFs from movie scenes and share them with others.

It’s paid, but I also managed to get a  25% discount code.
To use it, click here: Movavi screen recorder discount code
Code: brushwarriors

I will try to update this article over time an include other software an useful pieces of information, so if you have any tips and advices, please let me know!