Art, Kaiju, June – 3 things I love, combined into one – Kaijune. Grab a pencil and prepare yourself, because it will be hard for you to resist this art challenge!

Have you heard about Godzilla?

If you don’t know what Godzilla is, then you have probably lived under a rock! This classic movie became a worldwide pop culture icon, and basically started the Kaiju genre (Japanese genre of films featuring giant monsters). Why I’m mentioning that? Well, if Godzilla wasn’t created, we probably wouldn’t be able to participate in the Kaijune! 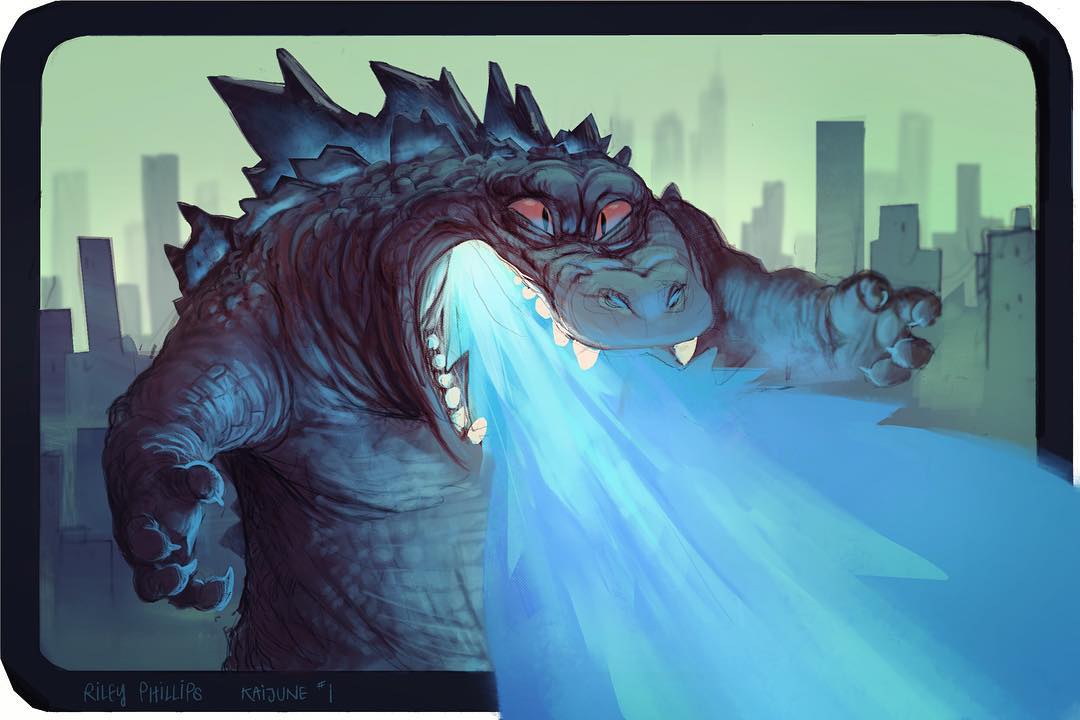 I absolutely love looking at the concept arts of monsters from the horror games and movies. I couldn’t start this article without mentioning the Godzilla, who was an inspiration for other movies and monsters, like those in the Pacific Rim movie. June is the perfect time to rewatch or catch up with new kaiju movies. And while doing this, we can get inspired, and use our imagination to create new designs of monsters – and that’s exactly what Kaijune is for!

But before doing this, let’s start by answering a few questions first.

What is Kaijune art challenge?

Kaijune (*Kaijuly) is a 30-days art challenge that takes place in June. The goal is to draw a new creature or your version of a classic creature,  every day of the month, following a prompt list.
*There’s no official prompt list. Many artists create their own lists and publish on social media, allowing others to use it. So, you can create your own prompt list or use an existing one.
The most popular Kaijune prompt lists are created by @flancortes

Kaijune is a combination of two words – Kaiju, and June. Kaiju is a Japanese word, written as 怪獣 and means a monster (strange beast, monstrual). June is the sixth month of the year. *Kaijuly – instead of June, it uses “July”.

There’s also a Kaijuly art challenge. It’s the same challenge as Kaijune, the difference is, that it happens in July.

I have tried to find out which one started first, and came across the KAIJULY ROARTH MARATHON that was registered as a trademark in 2016. (Kaijuly Roarth Marathon was an event that took place in 2017 and 2018 – movies from kaiju genre were streamed on El Rey Network).

The Kaijune art challenge was created in 2017 by Riley Phillips – a Character Designer at Warner Bros. 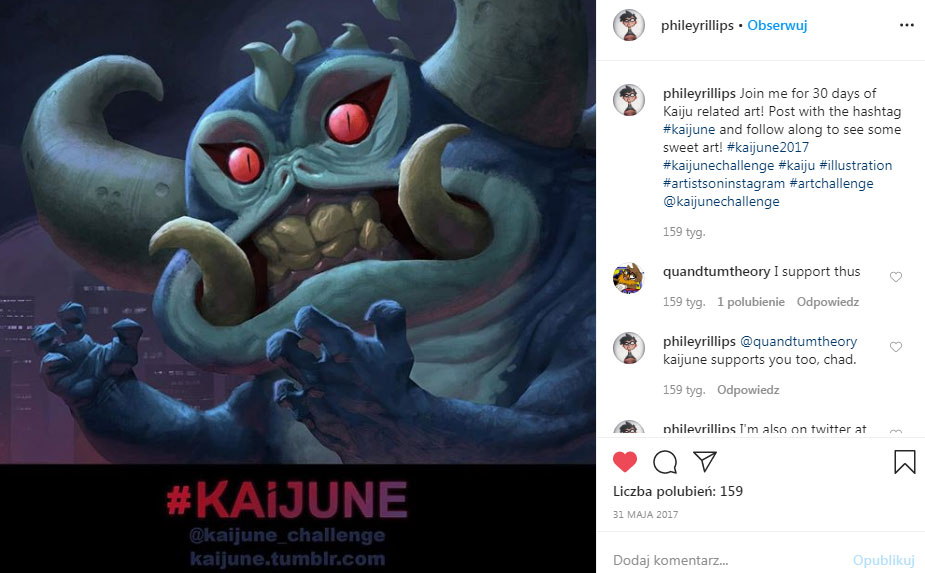 Riley created a Tumblr page dedicated to artworks created for the Kaijune 2017, you can check them out here: kaijune.tumblr.com

It seems that Riley Phillips doesn’t publish Kaijune prompt lists anymore. However, it does not stop artists, and many of them decided to create their own lists. Here are some of them: 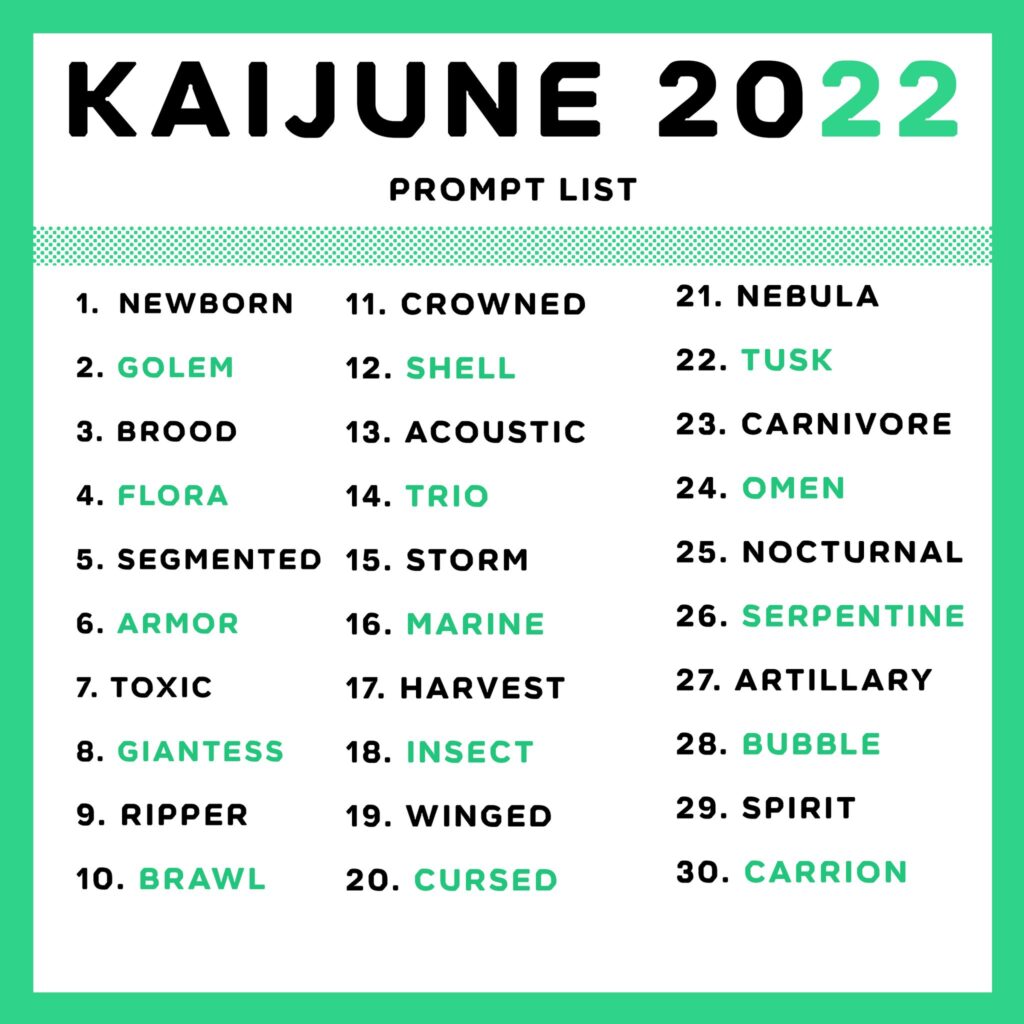 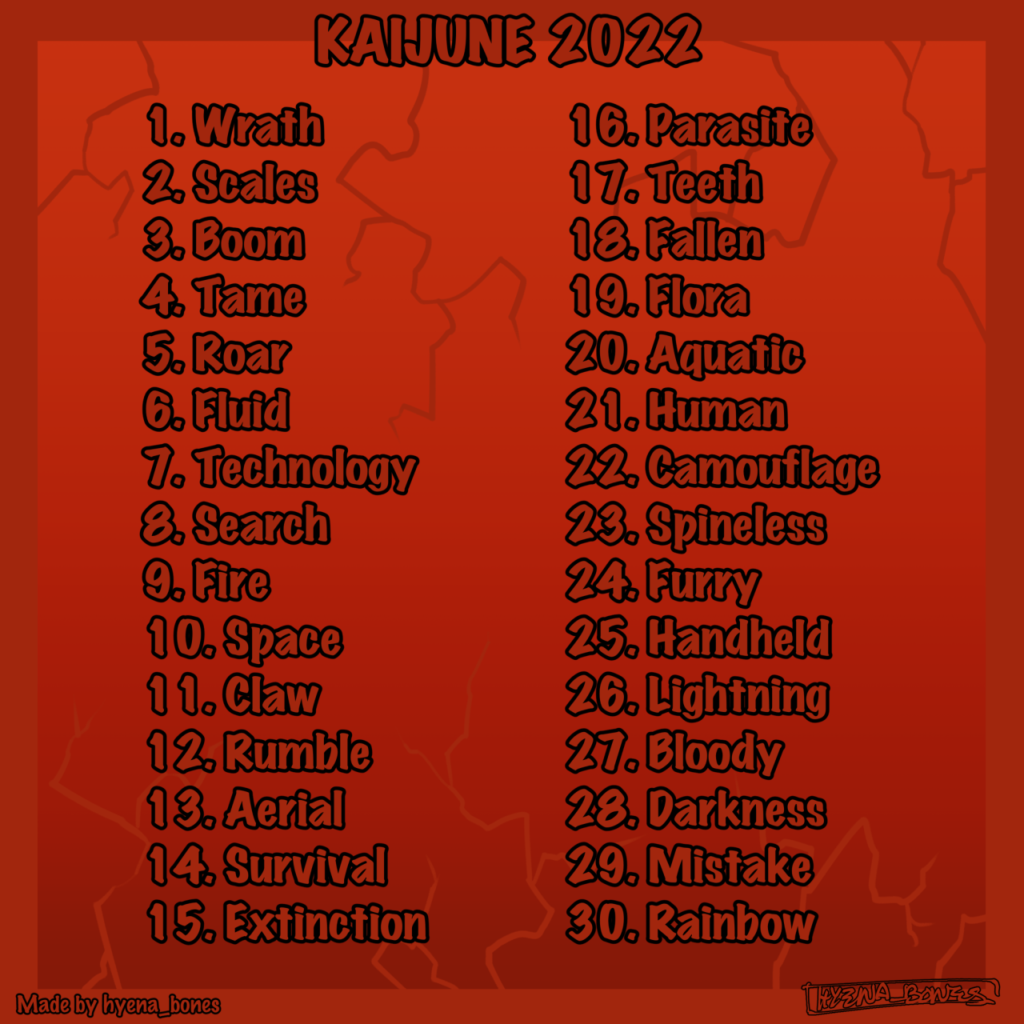 Do you plan to create your own list? Cool!
In this section, you can find Kaijune prompt lists from the past years. Check them out to get more ideas for your own prompt list! 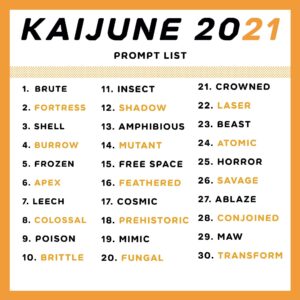 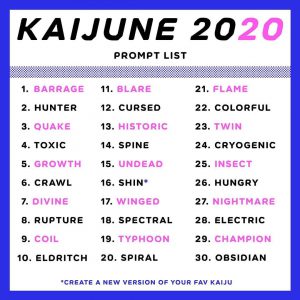 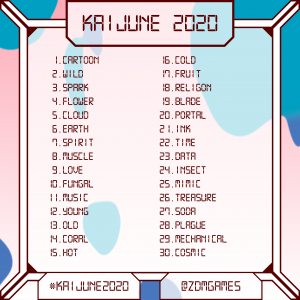 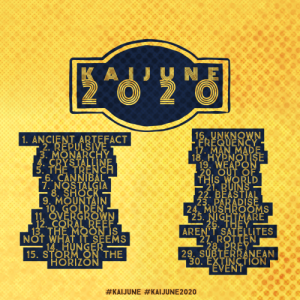 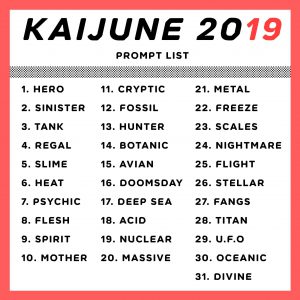 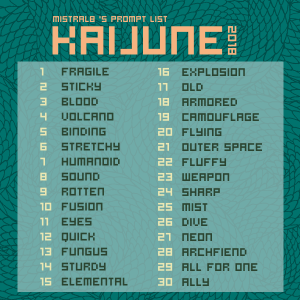 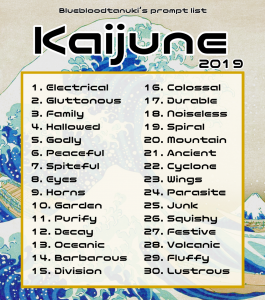 Here are some amazing artworks for your inspiration! Click on the images to go to the author’s page 🙂 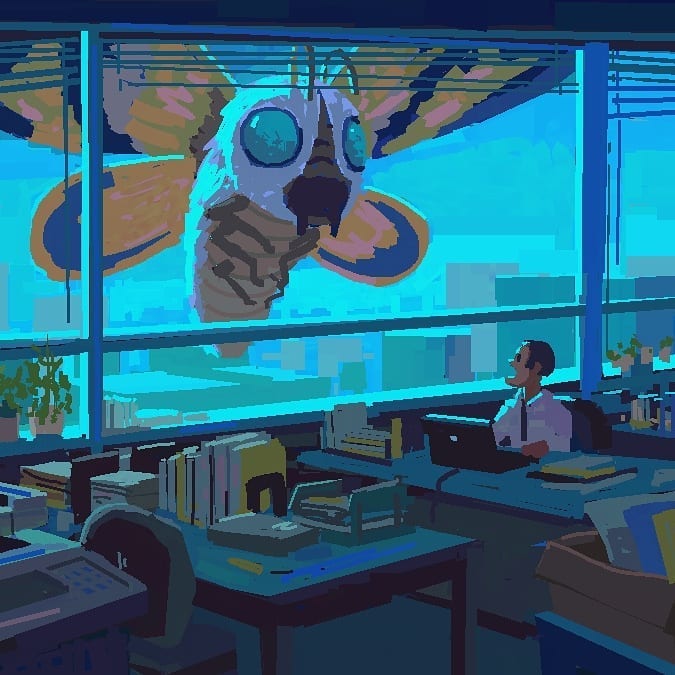 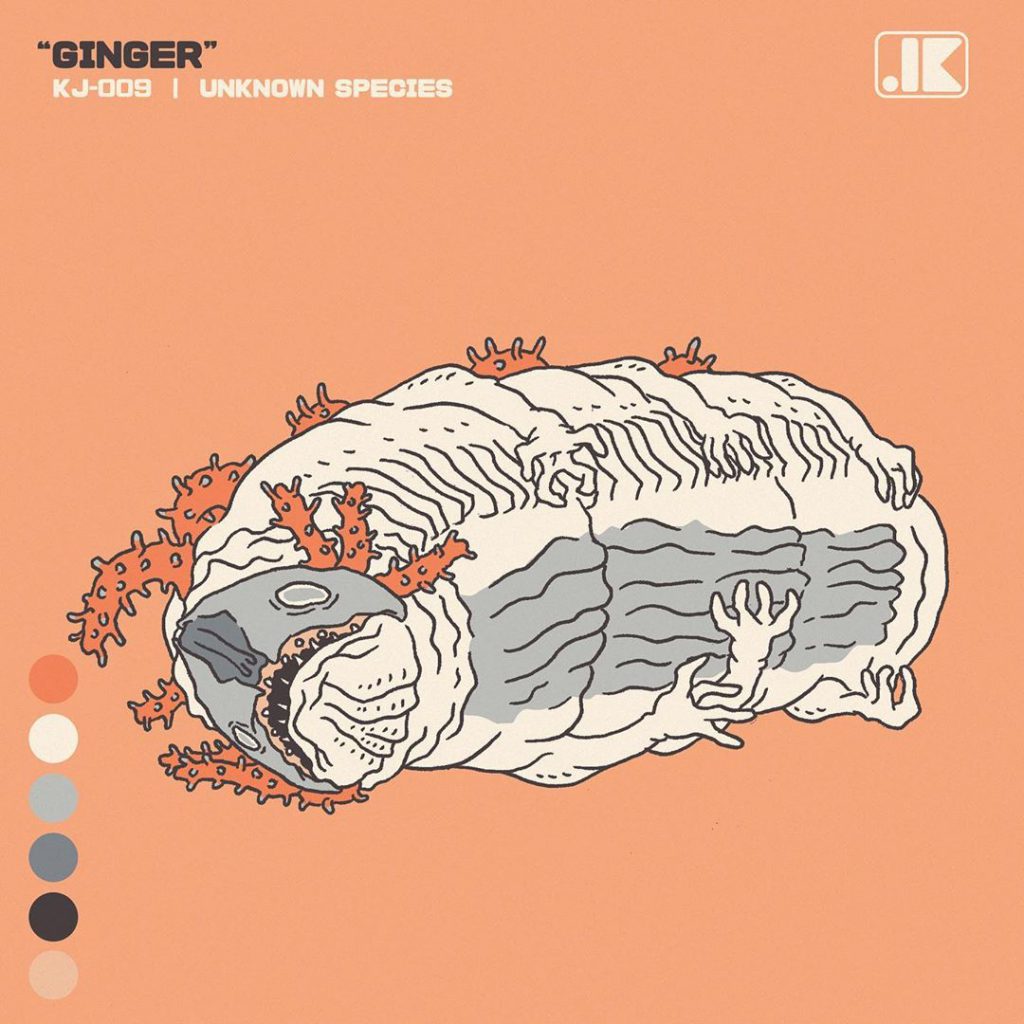 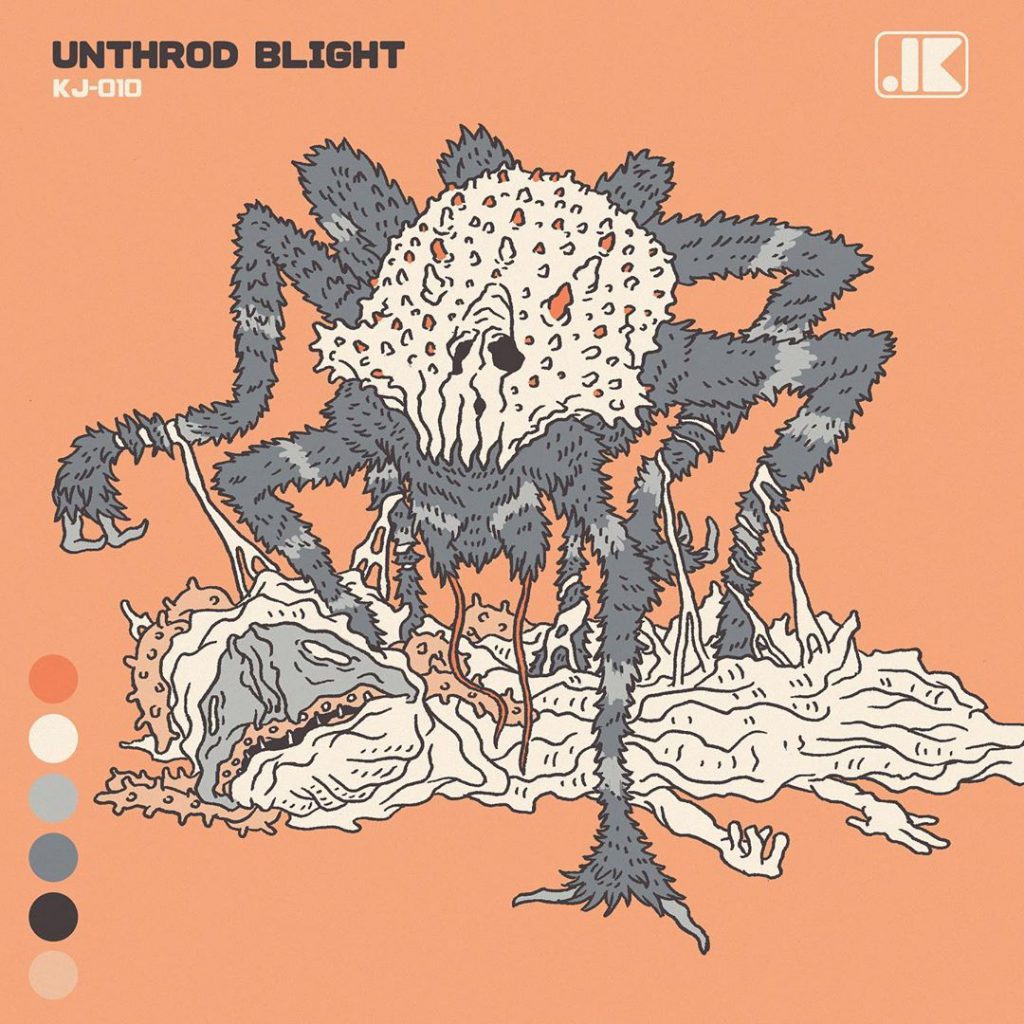 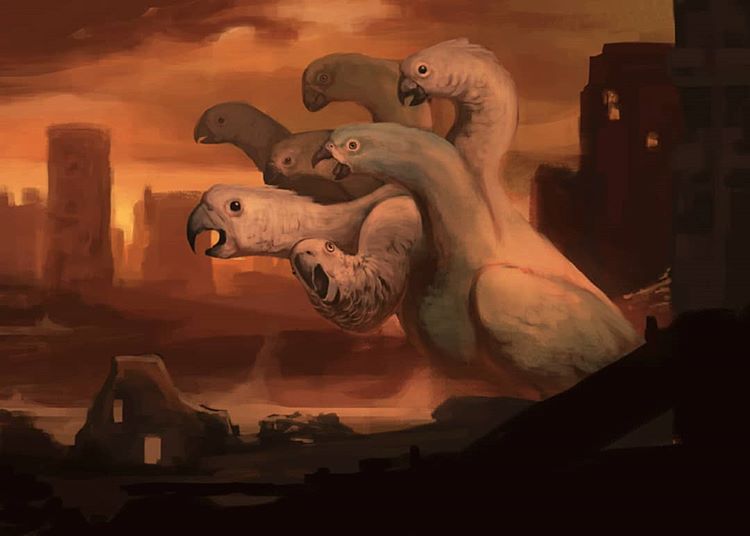 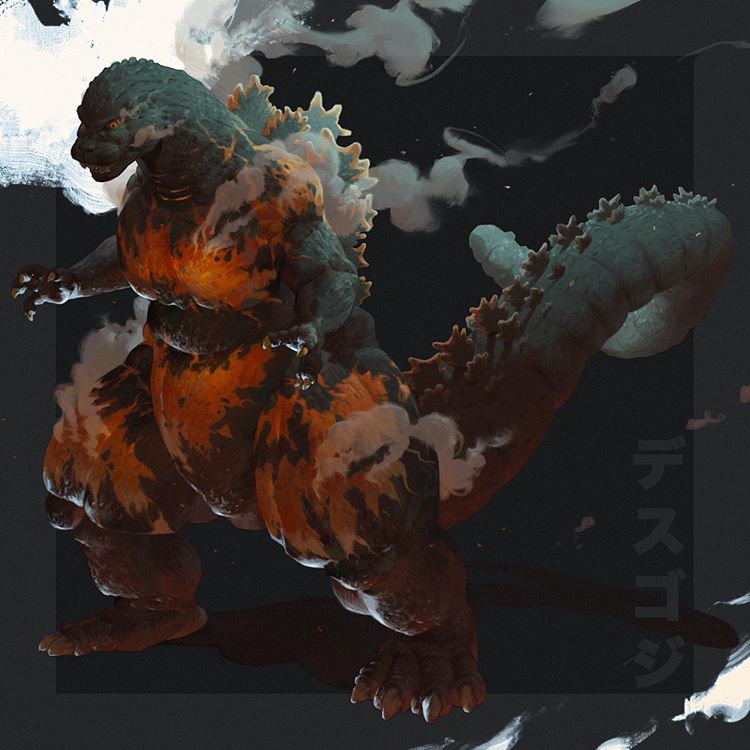 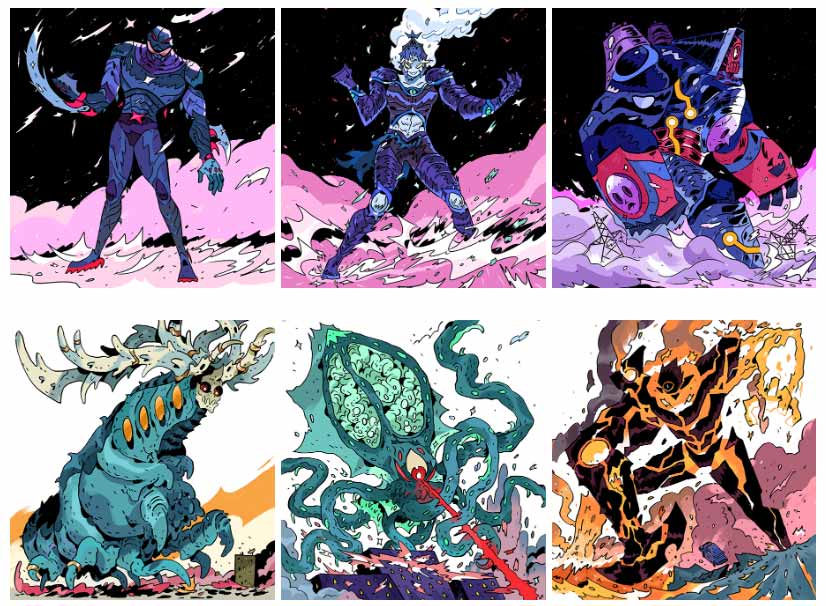 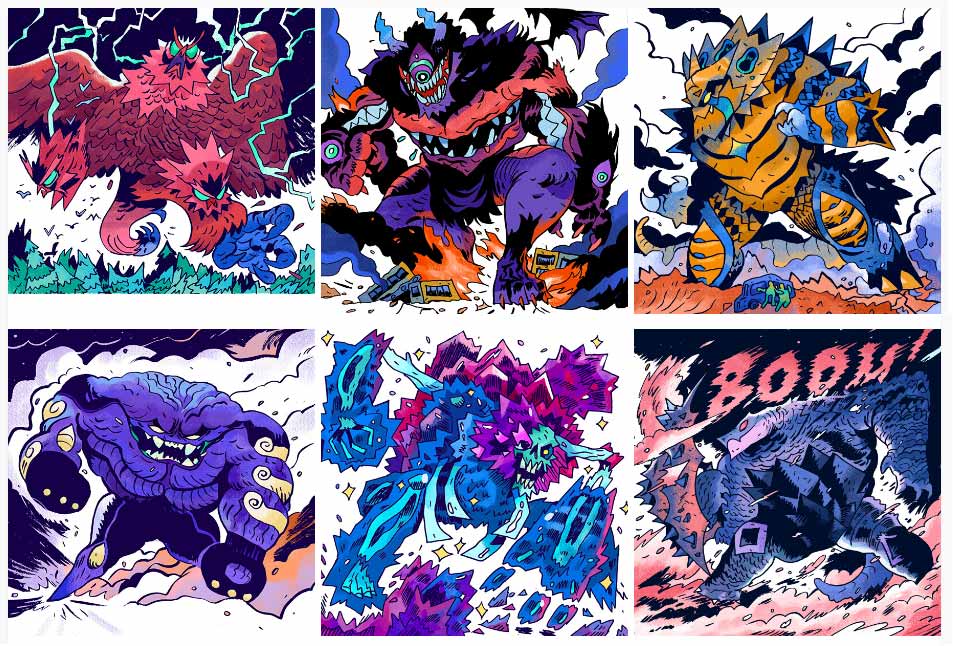 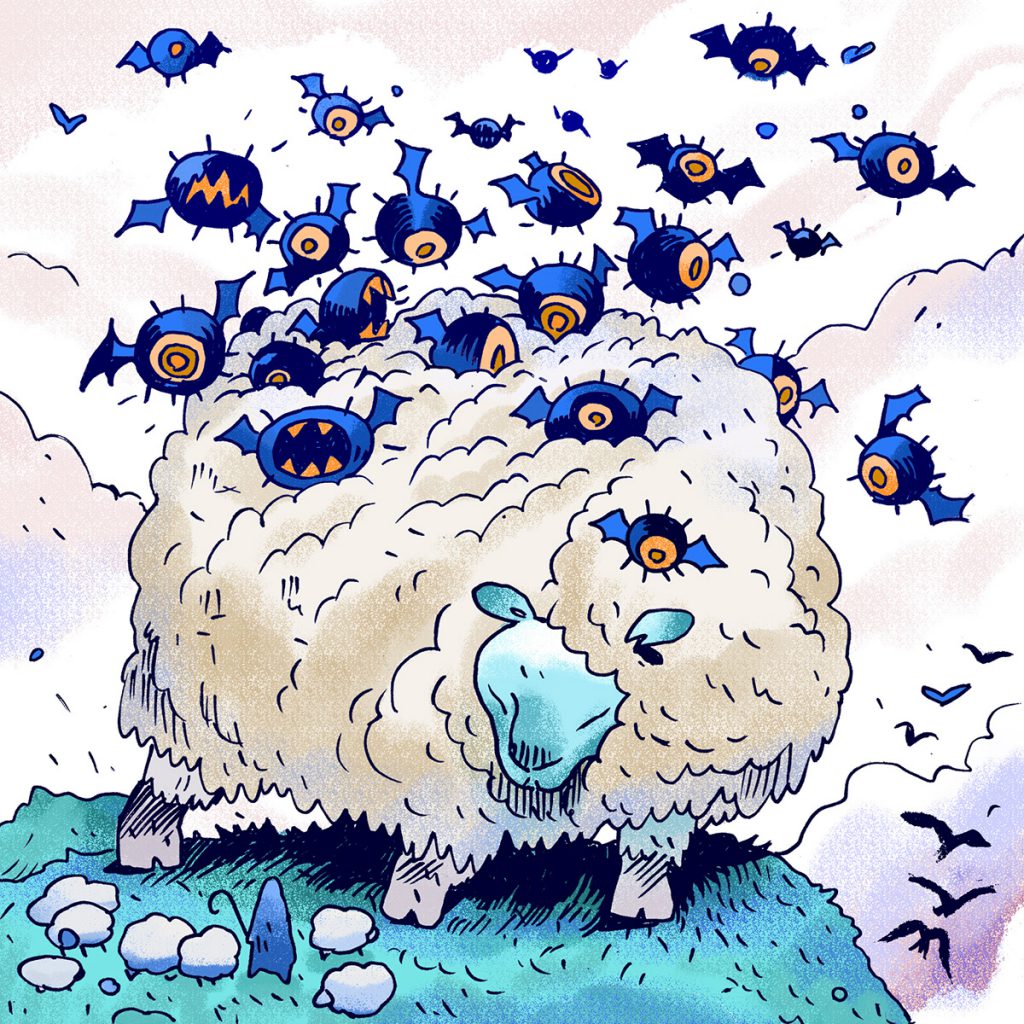 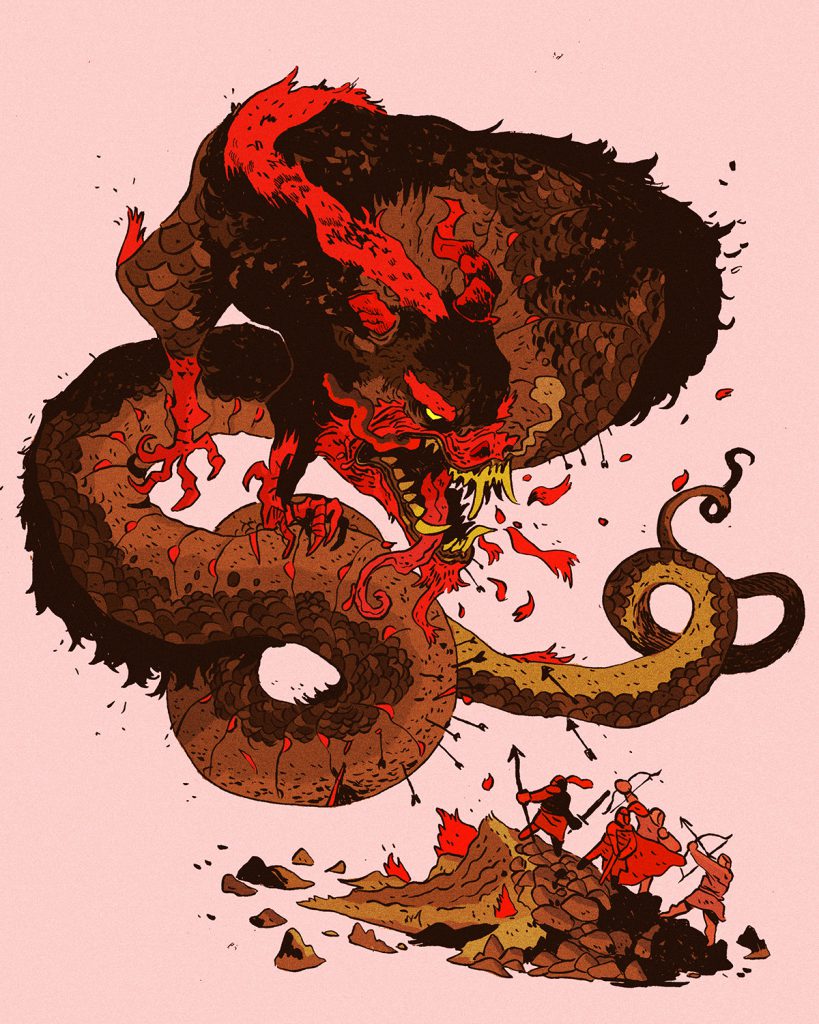 And this is also drew by Alan Cortes 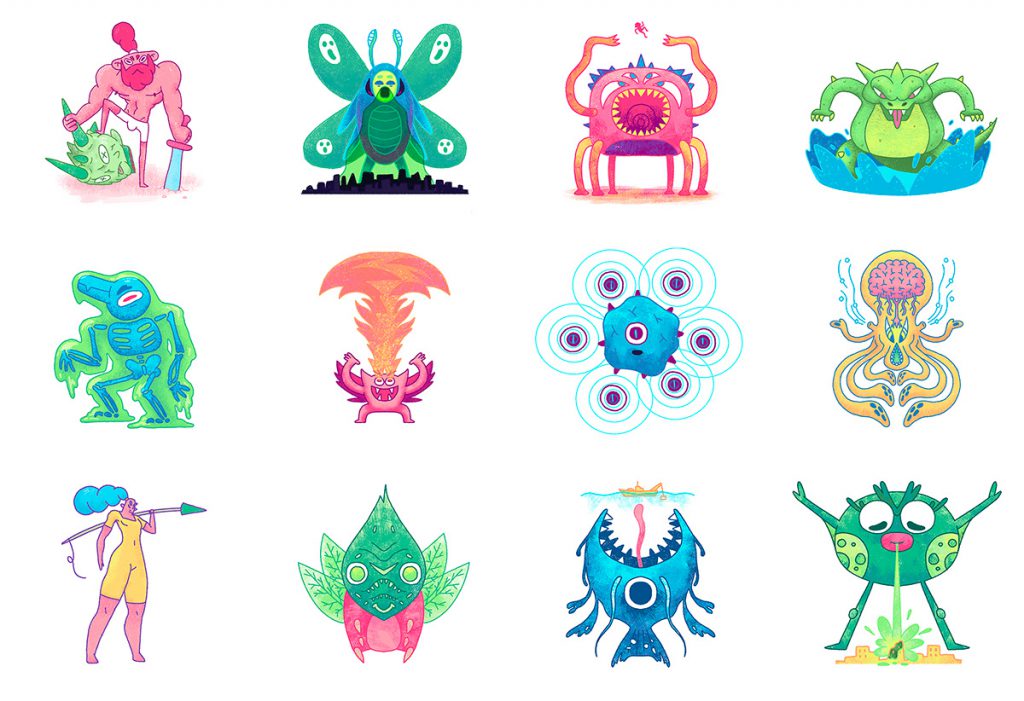 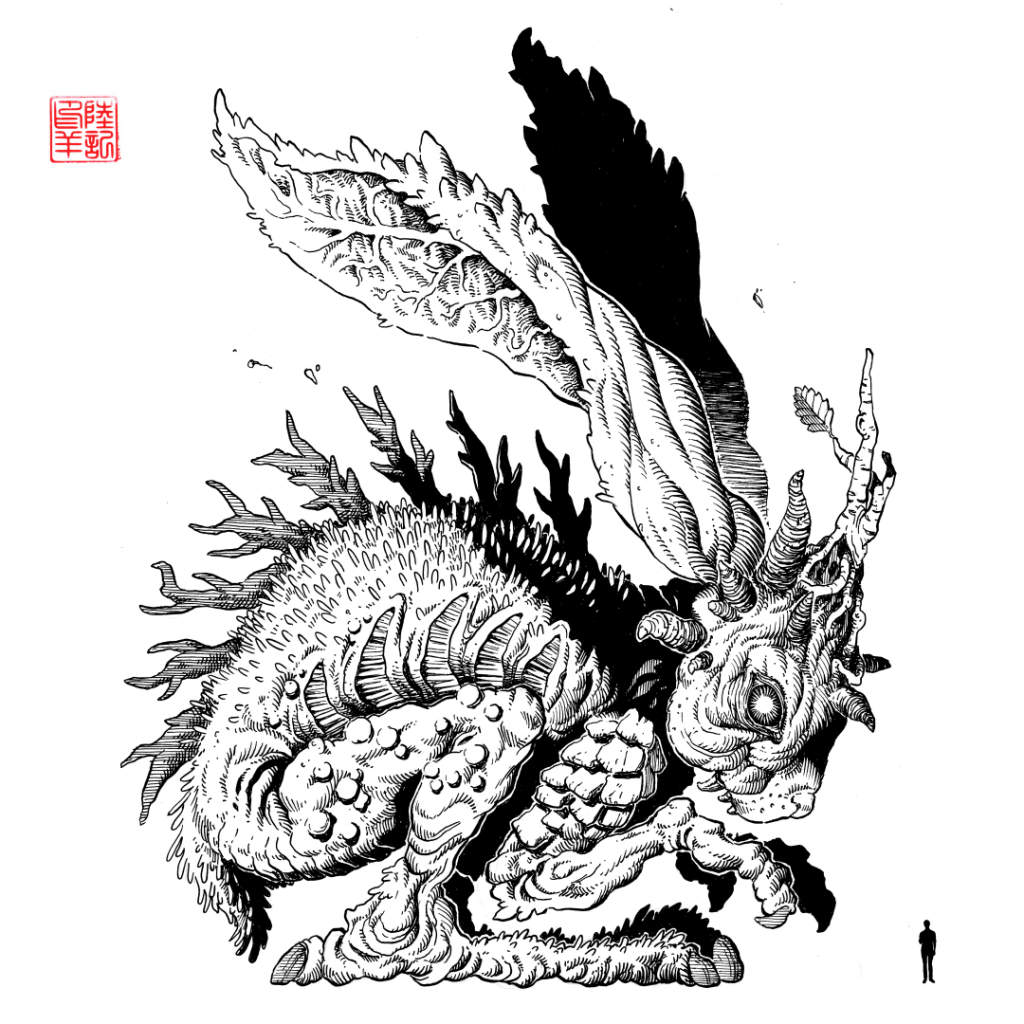 There’s more awesome designs on Jordan Lewerissa’s page, you can check them out on his blog.

A few more pieces of information…

Hey, I’m updating this article because I found some info that might help you in drawing monsters for the Kaijune challenge. Consider this as a bonus 🙂

Kaijin – “monster man”. This term refers to Humanoid Kaiju (in reference to their posture and size). But sometimes they can grow to Kaiju-size.
Examples: some of Power Ranger monsters, like the Hisser

Gif: Jet Jaguar vs Megalon. Jet Jaguar is Mecha – but you can see the here concept of kaijus growth.

Seijin – “star people”. It refers to Kaiju from the space, extraterrestrial aliens.

How many Kaiju do you know? You might actually be surprised by how many monsters you know are in fact Kaiju!

First place for our hero, who started the whole Kaiju movie genre – Godzilla. 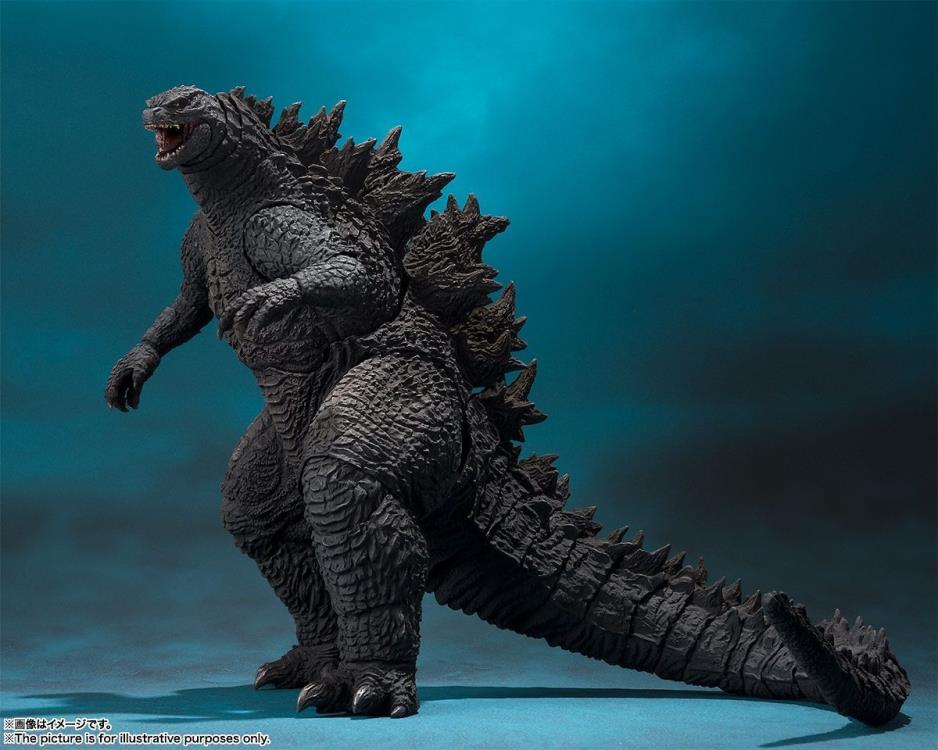 The second most popular kaiju may also surprise you. This one comes from USA, and its name is King Kong 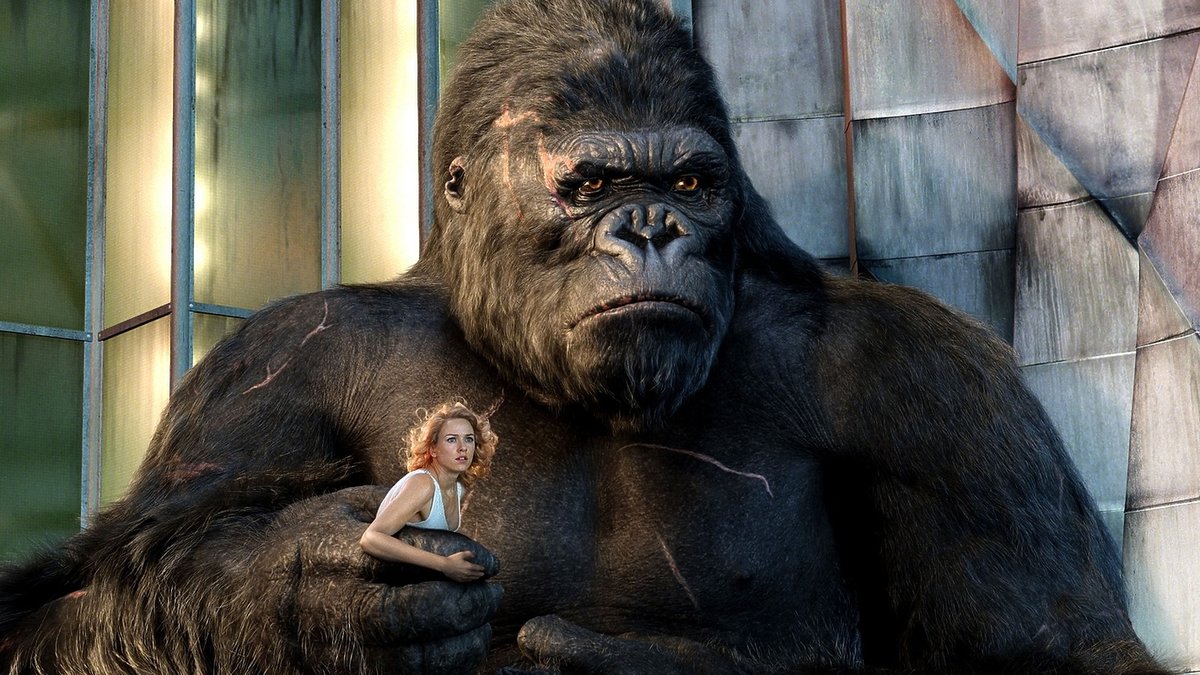 Mothra, a Kaiju that is 2nd most popular Kaiju in Japan, right after Godzilla.
Personally I just found out about Mothra when I was doing this research about Kaijune – but for my defense, I wasn’t raised in Western nor Japanese culture.
Of course, we were, and we still are influenced mostly by western culture, so growing up I watched a few American cartoons and TV series. And while reading about Mothra, I just realized that in fact, I saw in those TV series references to Mothra (example: South Park ” Mecha-Streisand ” episode, where one of the characters transforms into a huge Moth). 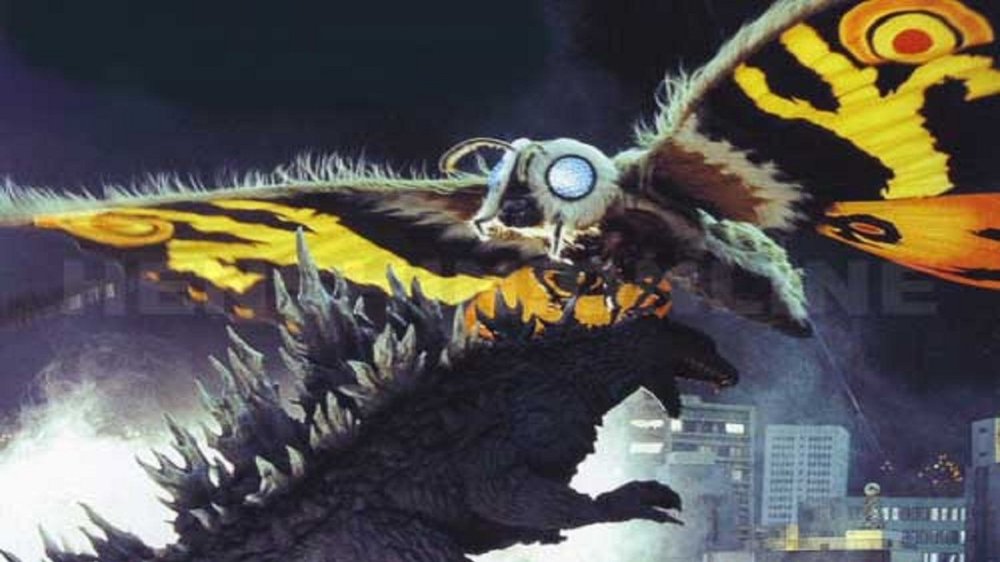 Mothra is mostly portrayed positively, as a natural protective force, in comparison to Godzilla, who had also antagonistic roles. Another thing that makes Mothra so interesting, is the accompaniment of two fairies – (human looking) twins.

Let’s move to the next “place”. This time I won’t present one kaiju, but mention, in general, the Movie – Pacific Rim.
Pacific Rim is from the kaiju and mecha genres. And while the film draws heavily on these genres, it avoids direct references to previous works. 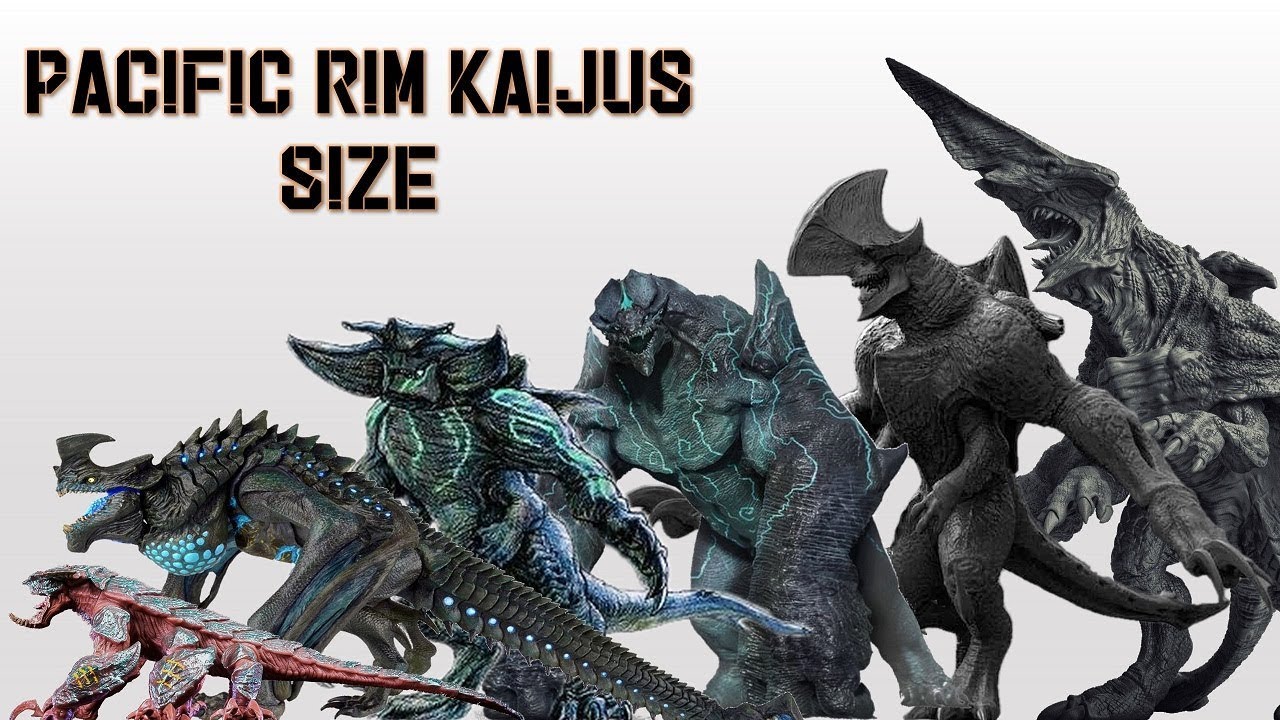 The designs are really cool! Also, the concepts are interesting and it’s a waste that there weren’t more kaiju included in the movies. There were about 100 concepts of Kaiju created, but only some of them were chosen.

This video is definitely helpful if you want to try to create your own Kaiju!

I hope that these pieces of information are a good inspiration for you. If there’s a monster that should definitely be mentioned here, let me know!

Ps. If you think your kaiju design’s are not good enough, here’s one of Power Ranger monsters: 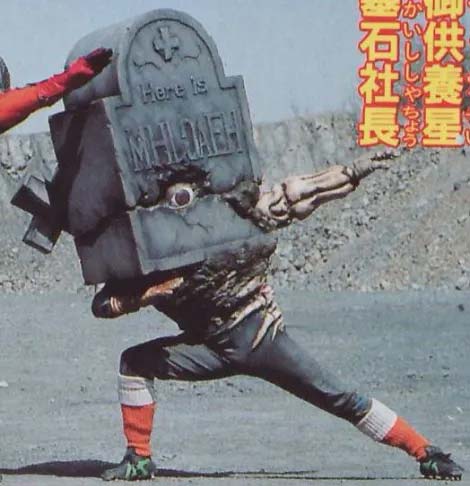