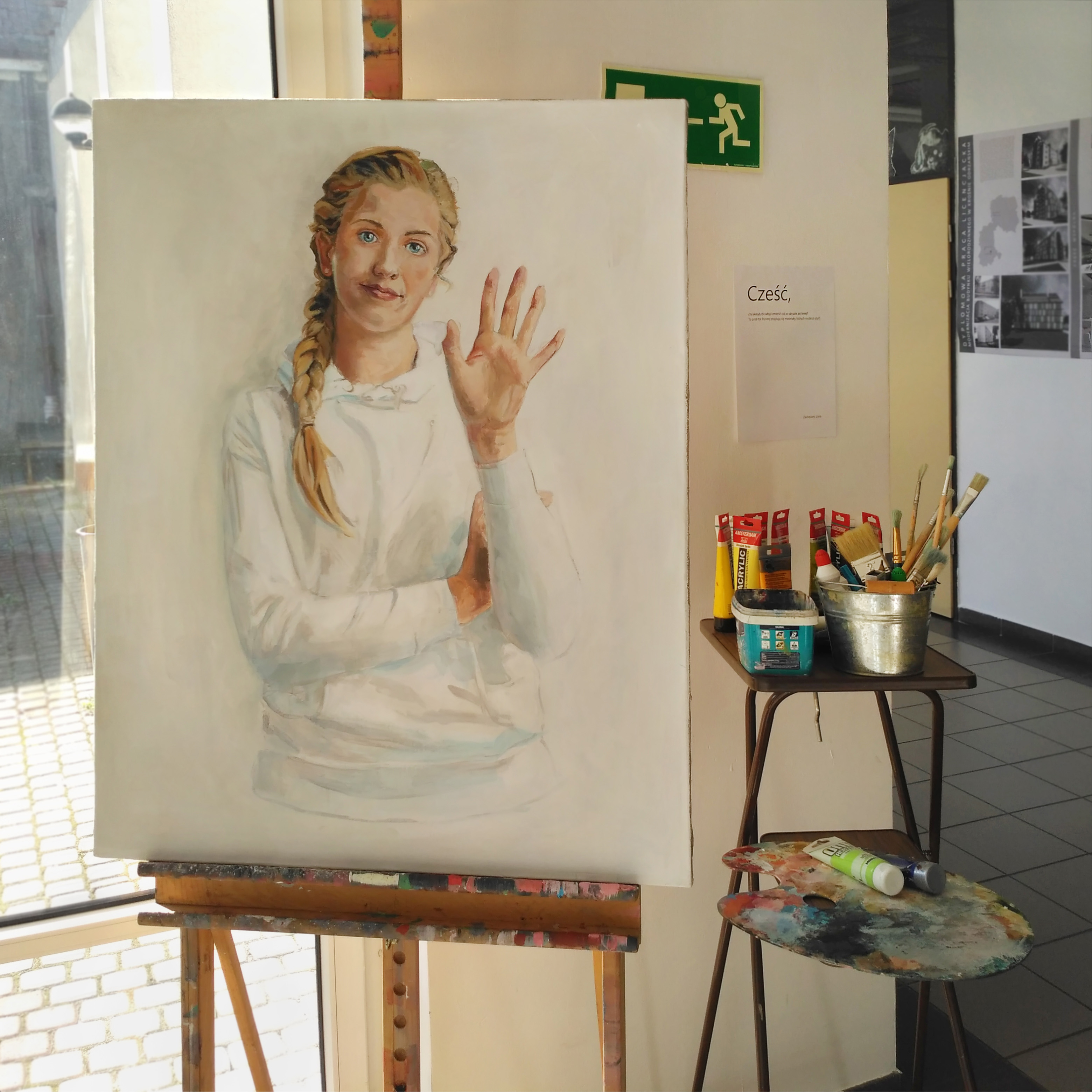 Liwia Litecka spent hours painting her autoportrait on a huge canvas – her specialty is traditional painting. I always envied her for mastering this traditional art medium and for her skills in painting realistic portraits. I bet that not only I feel that way, at the art school she always stood out, participated in community projects, and overall worked hard to achieve her goals.

After Liwia finished her beautiful painting, it was left by her at the art school’s hallway, in the most crowded place. She also left there her brushes and paints – anyone could take them, or destroy the painting.

Why she did that? Did she forget to take her work home?

Of course not! That was a part of Liwia’s project called “Cześć” – English translation: 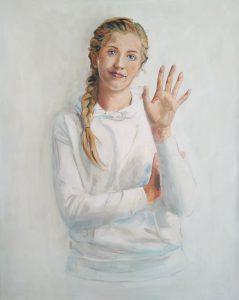 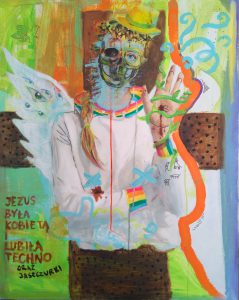 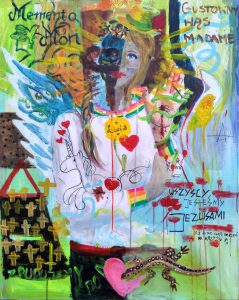 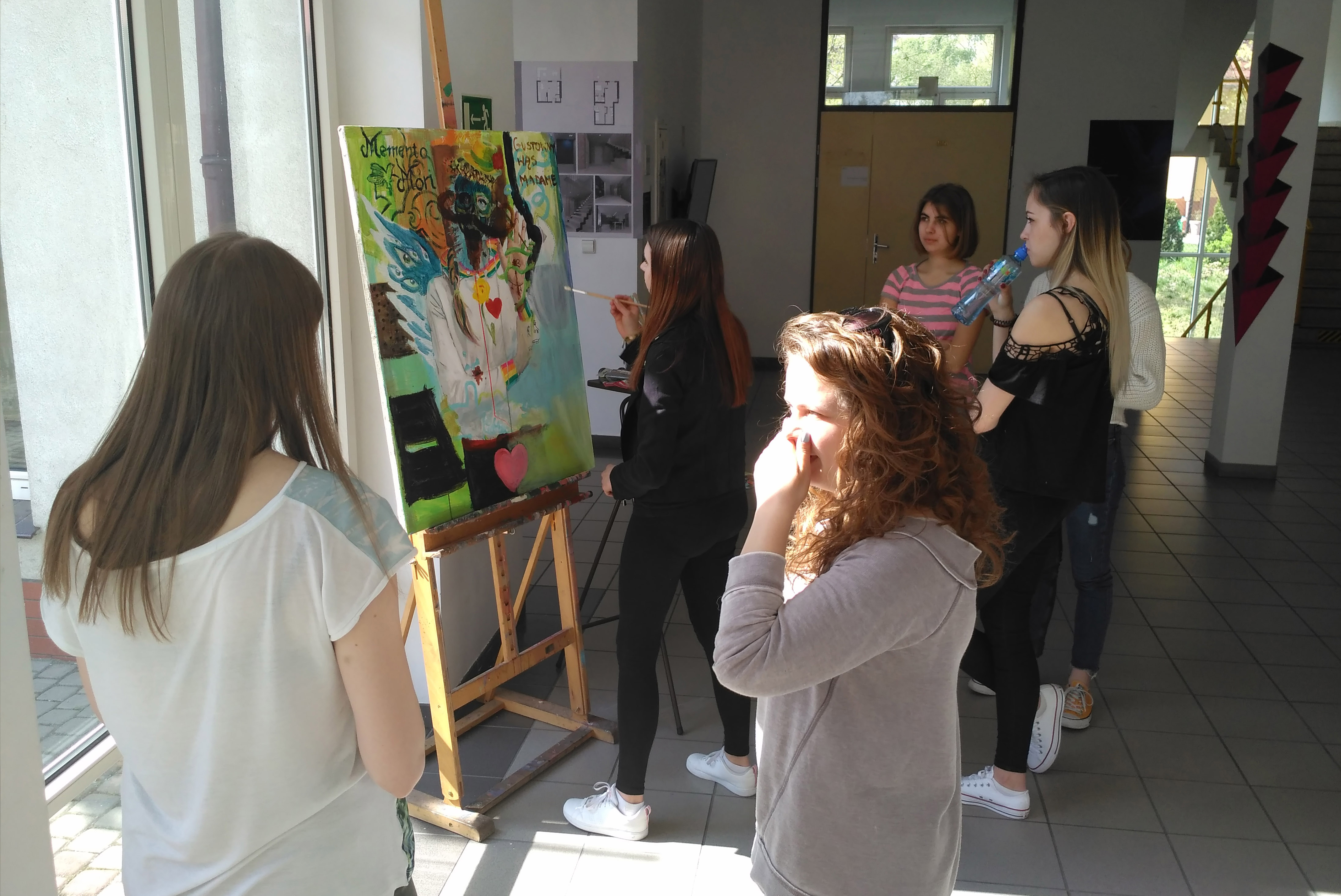 On April 14, 2019, she set up the easel on the corridor and placed her painting on the easel. She put paints and brushes next to it. And she encouraged people who passed by to transform her work.
The action lasted three days. And the effect probably surprised not only Liwia Litecka! 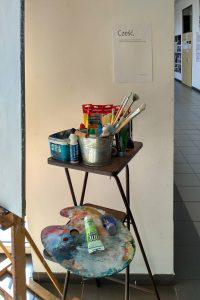 Where did the idea for such a project come from? Provocation…

Liwia: Provocation. And a task. I often got a question from people watching my paintings: what is my attitude to them? I always answer that my attachment to a particular image usually takes as long as the length of painting the artwork. The attitude is very variable – the first minute after putting away the brush is satisfaction, the next day is despair and the next day I fell a desire to paint something new – better. Generally – with distance. The moment of creation is important because it creates new realizations and a moment of confrontation with the viewer. I also said that I could even destroy such a picture, which to some people seems impossible. There was an opportunity. I could show that I really have a distance to what I do and do not glorify it as much as it seems to others.

Liwia: I received as part of the classes of Mural / graffiti / street art led by mgr. Sławomir Czajkowski (Zielona Góra, known under the pseudonym ZBIOK) the task of initiating interaction in public space and documenting the process. I asked the director of the Institute of Visual Arts dr hab. Radosław Czarkowski, prof. UZ, if I can put an easel in the corridor with a picture, so people could be able to paint something. He replied “Of course, yes! Just cover the wall so that it won’t get messy. “The wall was splashed and because I did not cover it and had to repaint the wall…

“Hi” is your self-portrait? 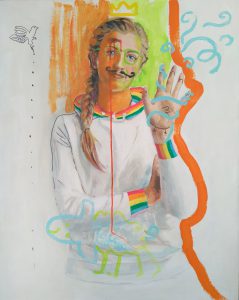 Liwia: I painted a self-portrait with a raised hand in a gesture of waving – hence the title of the artwork. I wanted to “say hello” to the passers-by, encourage to stop, look at the card with the instructions hanging on the wall next to the painting and interact with it. Managed to. From some of the first people who took up the brush, I heard that they were literally afraid of “destroying” it. I explained that this is the point! The number of people who took part in the operation surpassed my expectations (and the whole project lasted only three days! – April 14-17, 2019). On the “instructions” paper I left a place for signatures of co-authors – there were names of lecturers, students, but also people from outside the academic environment.

This type of realistic painting is your “hallmark”. Are you surprised by what you see in the final phase of the project?

Liwia: It was not easy. When I finished painting my face – the most polished part of the painting – I thought: I have been working on it so long, and someone can completely overpaint it? However, when you said A …
I was hoping that the painting will be “improved” in the artistic sense, maybe someone will paint a landscape in the background, which will tell where the character is. It did not happen. Perhaps it was a question of a place – a corridor – a “cruising” place, where there is no time to stop for longer painting?
I was expecting a mustache like Marcel Duchamp’s “Mona Lisa” (“L.H.O.Q.Q.”, 1919) or some crown … However, my hand gesture was associated with the iconographic image of Christ blessing or showing wounds – I wasn’t expecting that! Overall I was surprised, by the clash of religious opinions that appeared on the canvas. The inscription that appeared “Jesus was a woman and she liked techno” was painted over after a few hours, and the next day it reappeared in a changed form. During the project, I received a lot of questions when I will finally show changes, messages and phone inquiries, and praises. This reaction and interest of people in the project is probably the most enjoyable, and of course, I will keep the picture in remembrance. 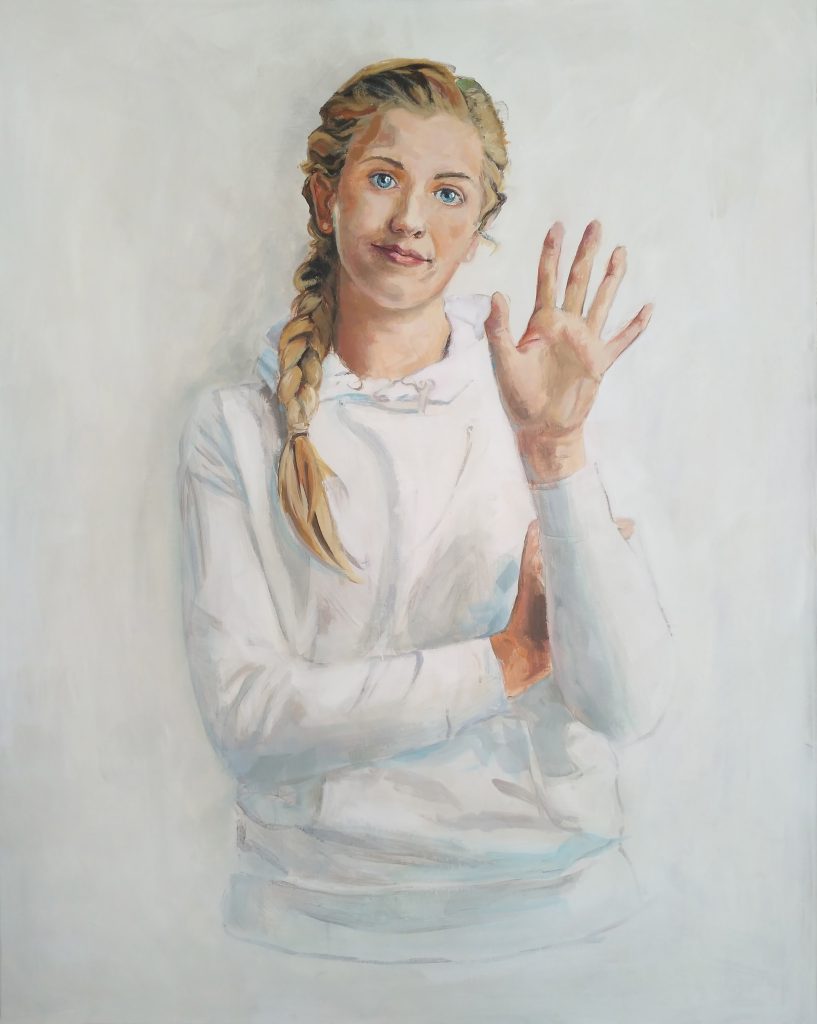 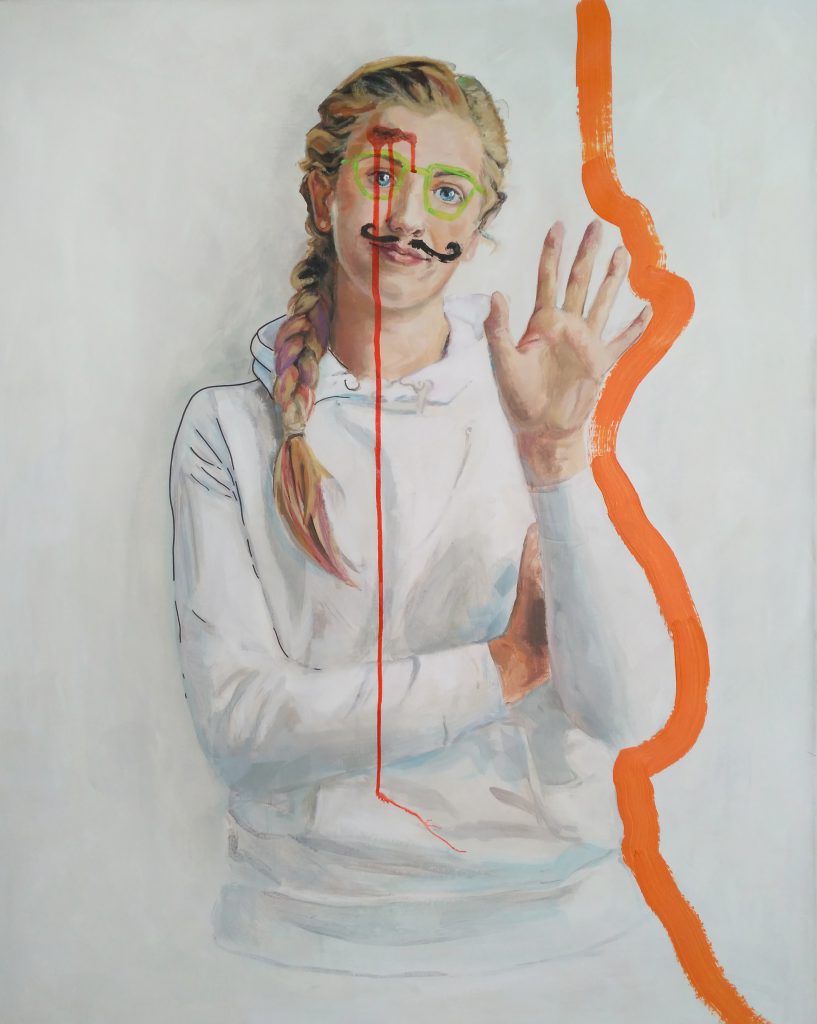 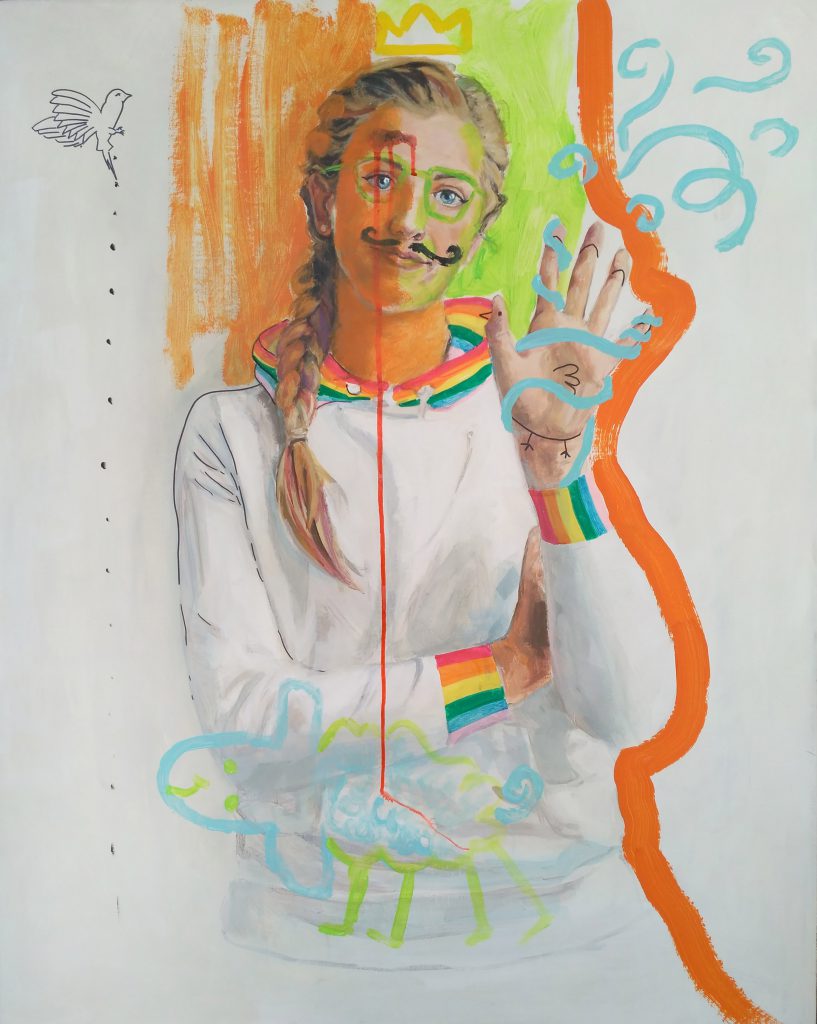 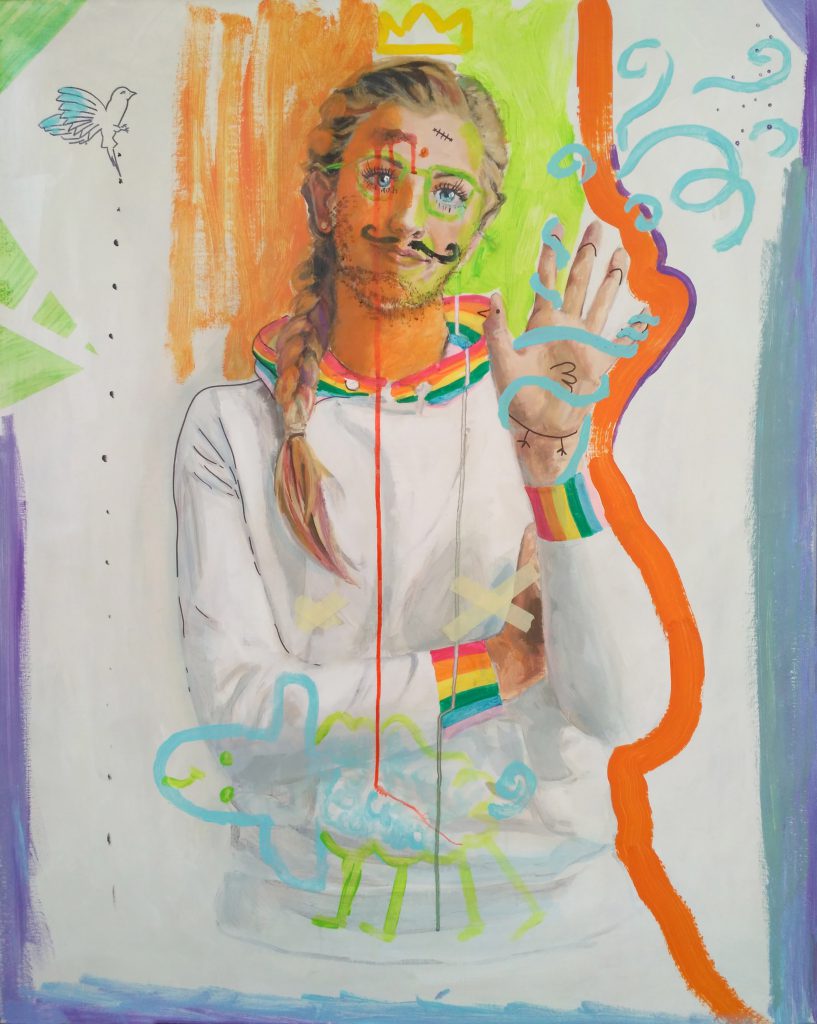 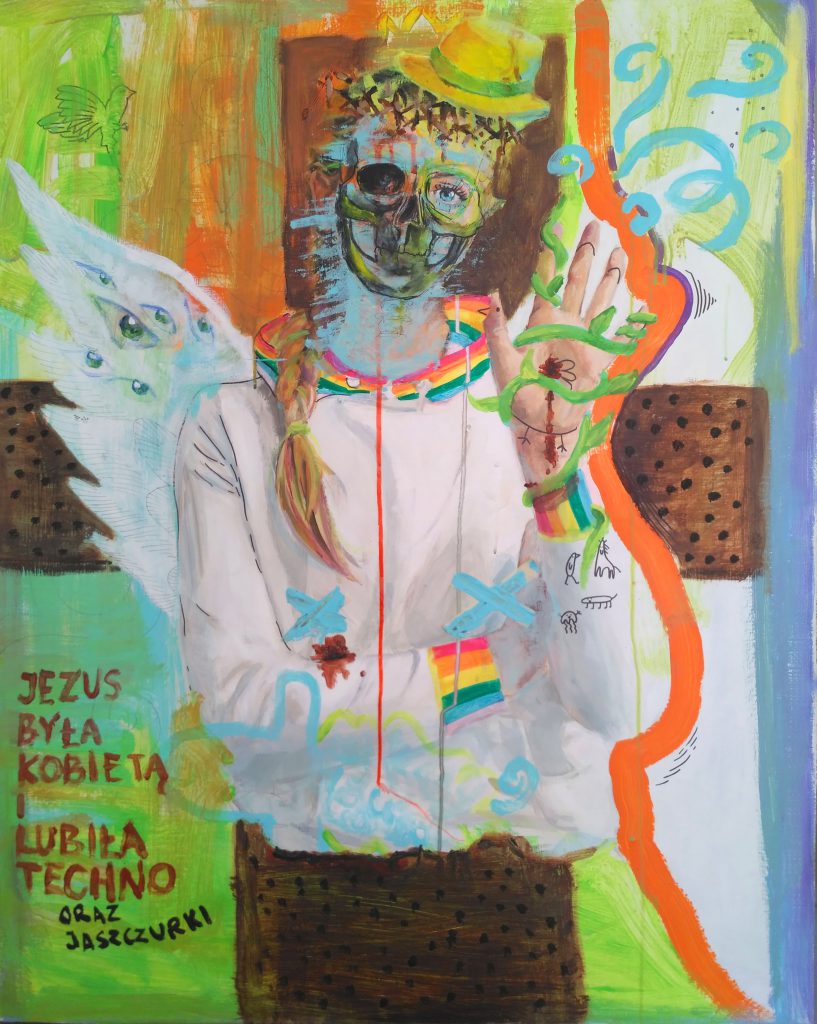 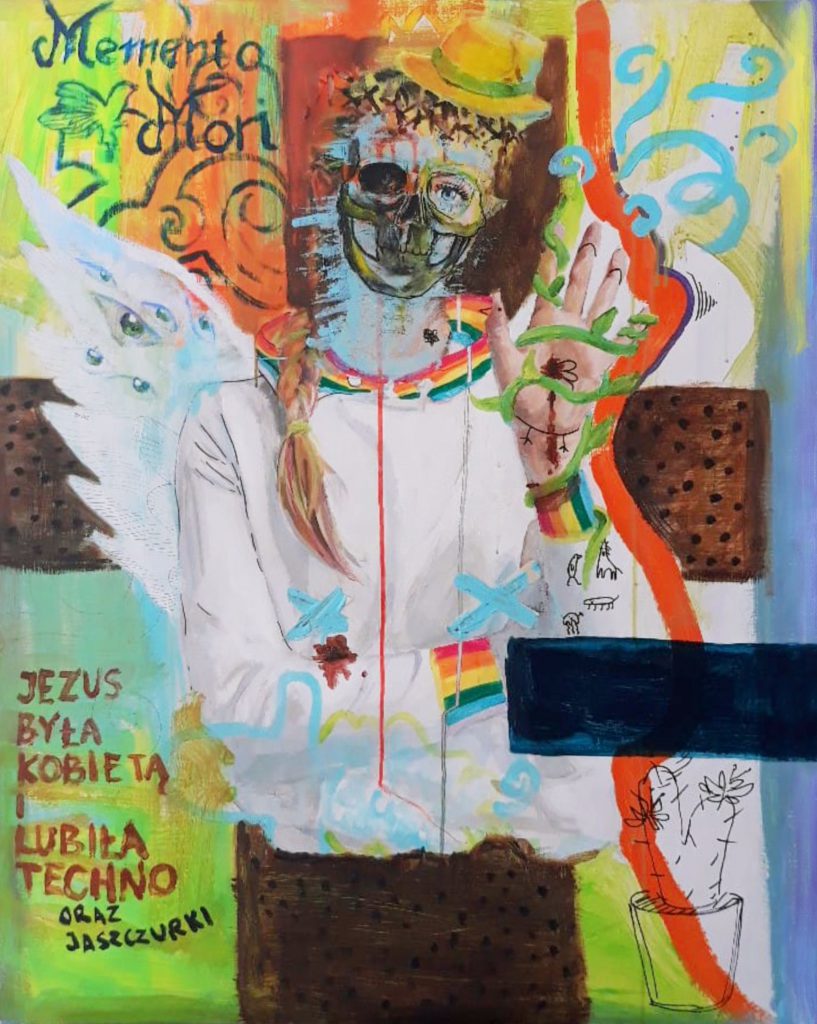 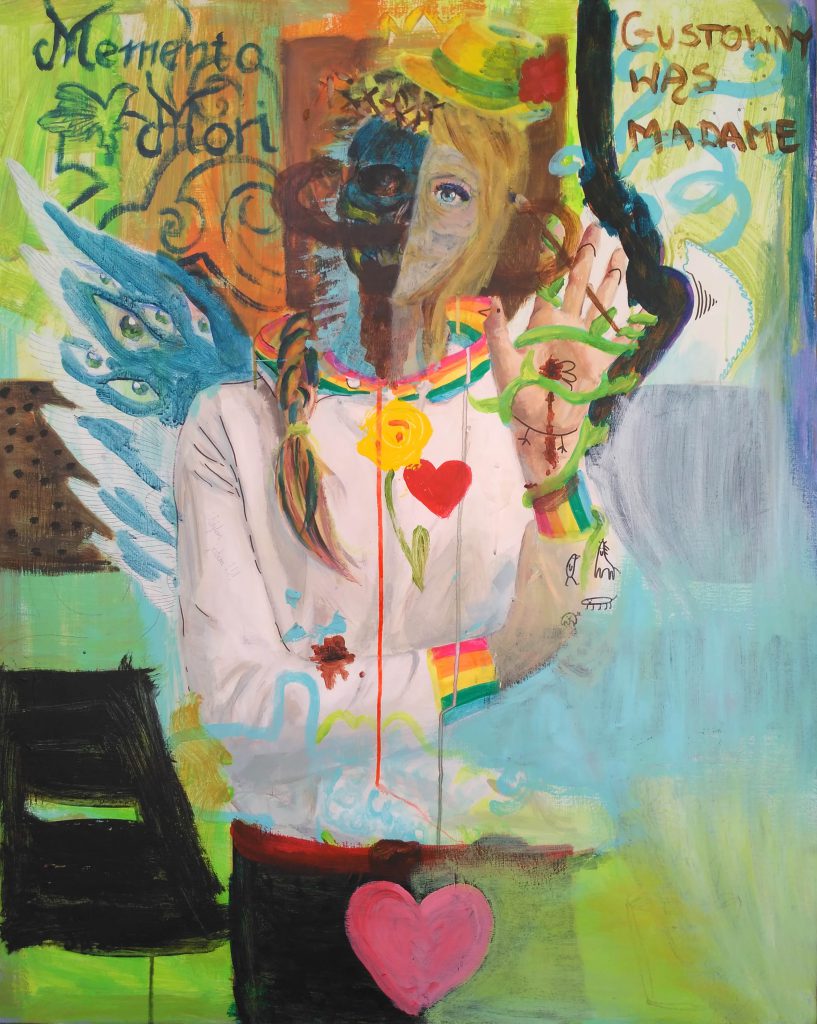 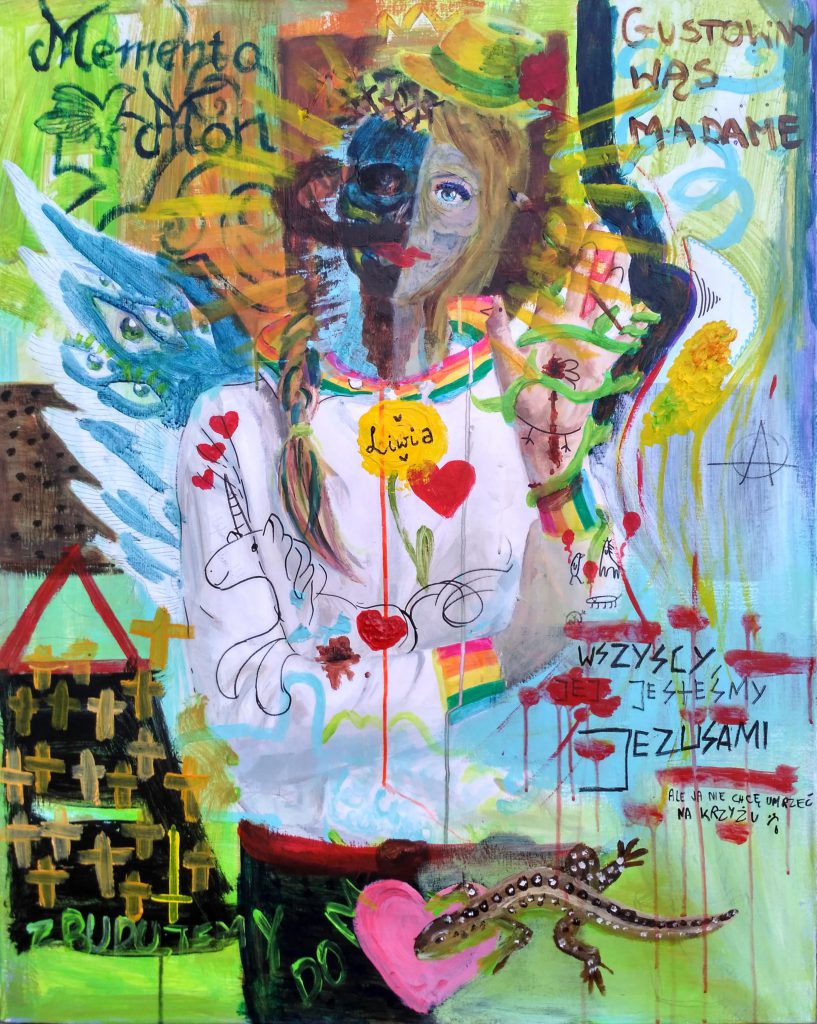 You can see more of Liwia’s beautiful artworks here: