Are you looking for a December Art Challenge? Yes?

Excellent! Perhaps you will be interested in participating in the Drawcember!

For me, December is a month where days start to be really cold, and the sun rarely seen. Some people start to feel the effects of Autumn sadness – unmotivated and sleepy, we lose interest for drawing… At such time I’m sure that we, humans, should also hibernate!

Hah, I wish I could sleep the whole autumn and winter, but I would miss the chance of joining the Drawcember – and a few other art events that take place these seasons. And as an introvert, I can’t imagine better evenings than those with pencil and paper, sitting in front of TV, wrapped in a cozy, fluffy blanket. Art Challenges, such as Drawcember keep me motivated and help me to keep up the habit of daily drawing.

So, grab a cup of coffee or hot chocolate (or ice tea if you live in a warm country)  and prepare for the DRAWCEMBER!

Drawcember is an art challenge, that takes place in December. During this month, artists from all around the world create a drawing for each day of December. The prompts are mostly Christmas-related, there are also many ideas referring to winter activities.

Its name comes from two words –December and Draw.

Any media is allowed, and you don’t have to follow the official Drawcember prompt list.
You have to keep the daily drawing habit, and most importantly – not give in to the autumn blues!

Currently, there’s no one official prompt list.
But rather a collection of lists created by various artists – who publish their lists on social media pages and invite others to join. In this section, you will find several of them.

Edit_: It’s time to update this article with new prompt lists for 2022! Right now new Drawcember prompt lists are being created by artists and published on Instagram/Twitter /reddit. Below you can see a few lists that I’ve already gathered for 2022. You can use them for your art challenge, or as an inspiration to create your own prompt list.
*I will update this article again soon, just waiting for more prompt lists! 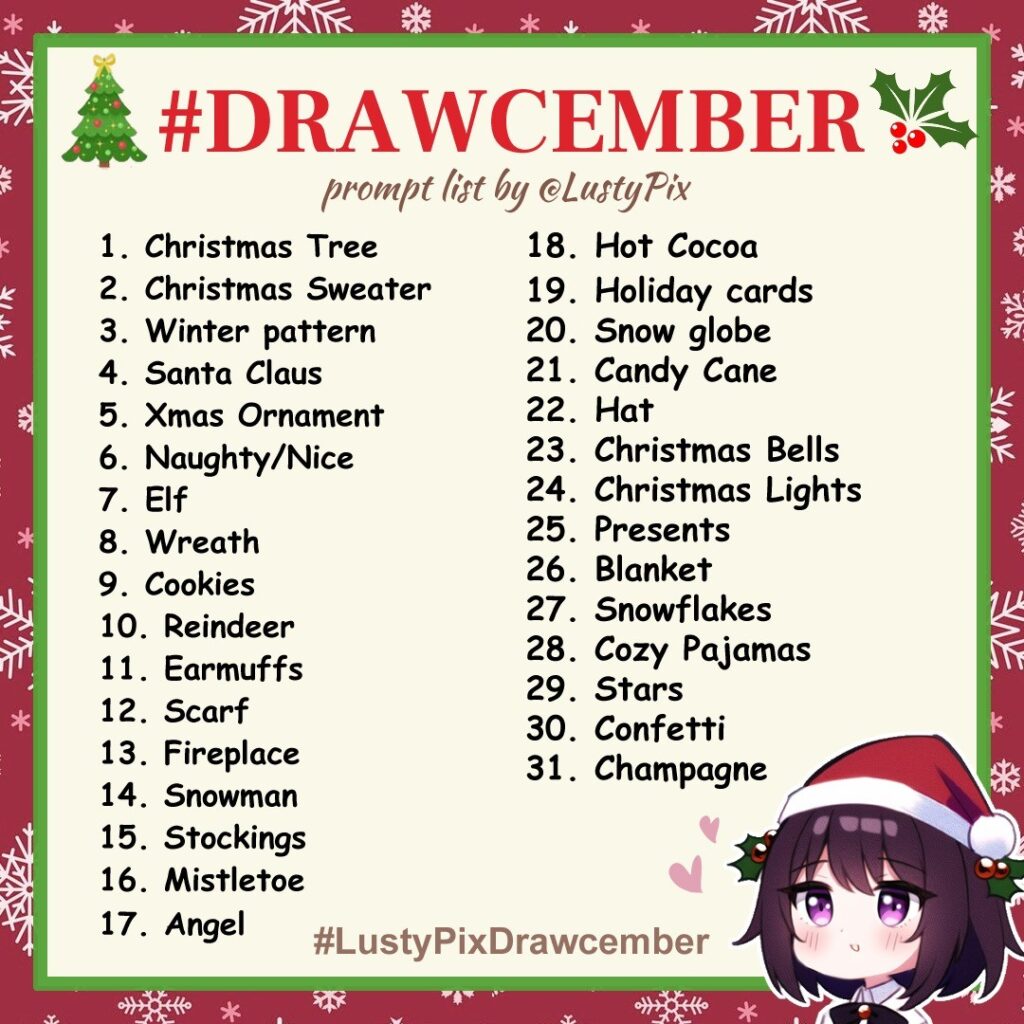 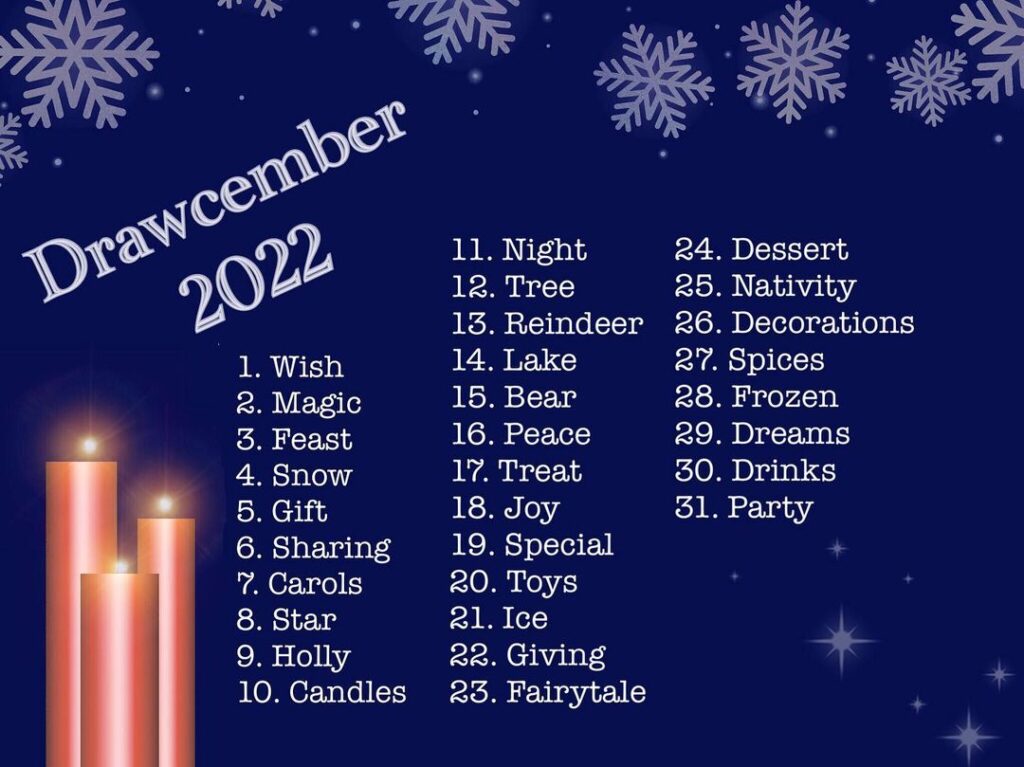 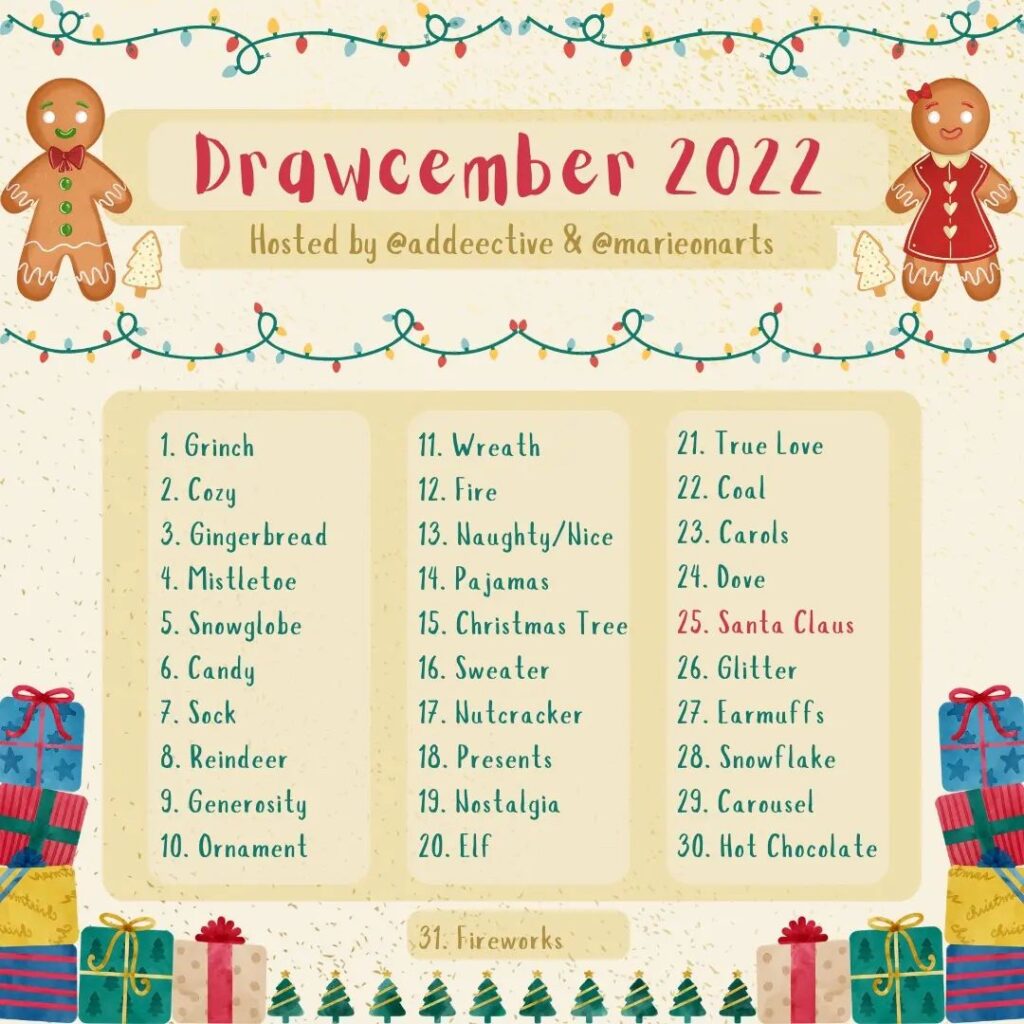 *I would appreciate if a certain site (xquissive) stopped stalking and stealing from my articles, and tried to gather info on their own.

I found it while looking for 2022 prompt lists, and believe it shouldn’t be left unmentioned.
L00TVENT is a parody of the classic advent calendar, it’s more inclusive of all the other holidays celebrated during the December. It’s goal is the same: to get you into the holiday spirit!
hashtag: #l00tvent2022 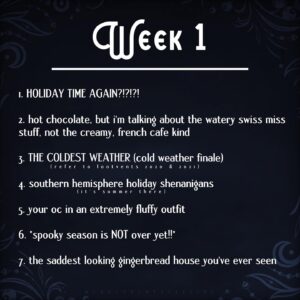 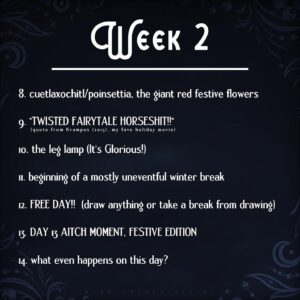 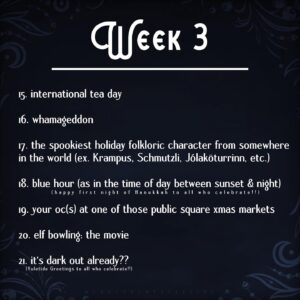 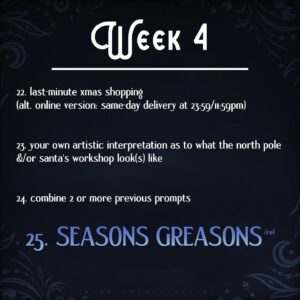 Here’s a collection of prompt lists from previous years.
The prompt list that you see below was published by a user named u/do_hamsters_sweat. He/she also created Reddit’s Drawcember prompt list for the previous years. If you plan to use it, join the community on Reddit and post your drawings there! – r/Drawcember 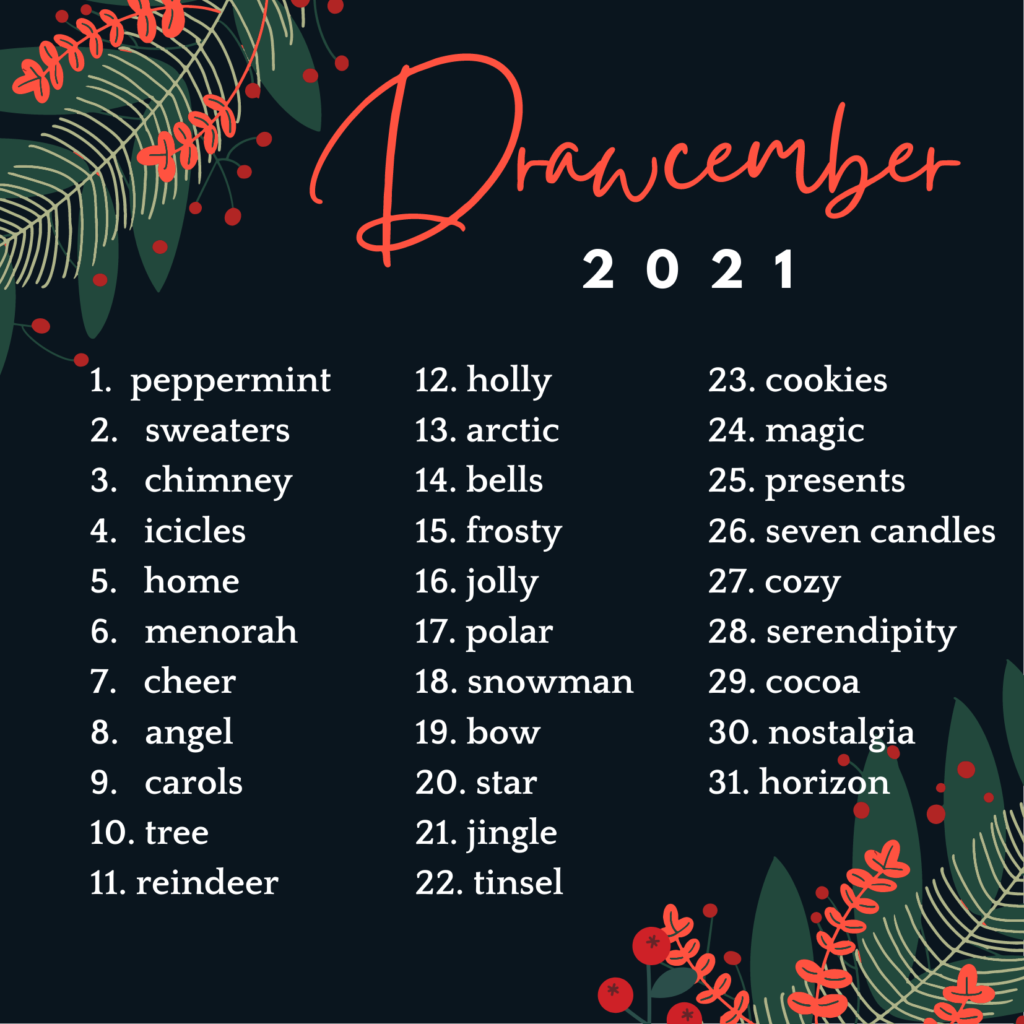 Another list was created by Jill Art and published on Intagram. She was inspired by what surrounds her during this period of the year, and was trying to stay away from any religious reference to make this series accessible to everyone. 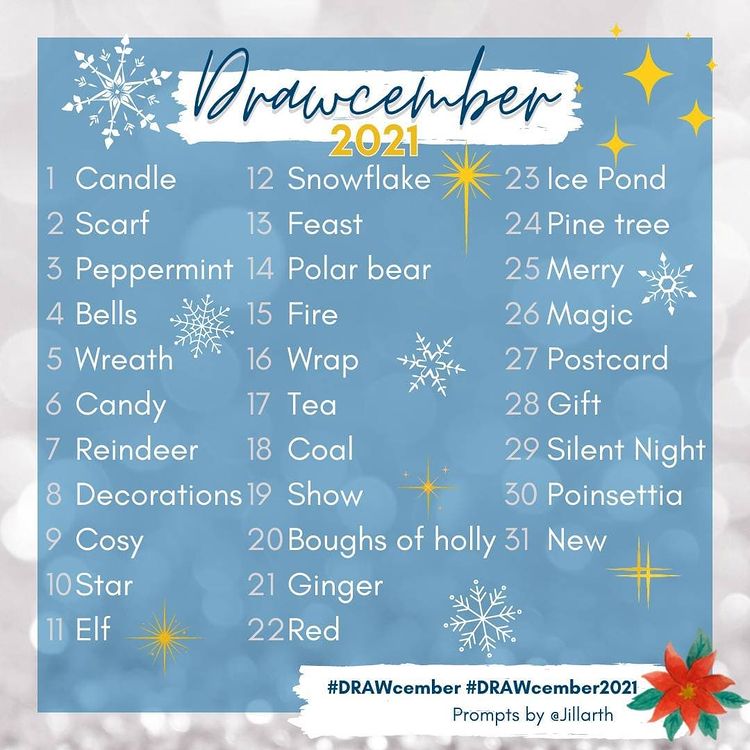 If you are not so fond of the Christmas and winter-related prompts, perhaps you will be interested in the list that was created by Ruby. Its main theme is garden, so if you live in countries where there’s no winter at all, you may find it more relatable. 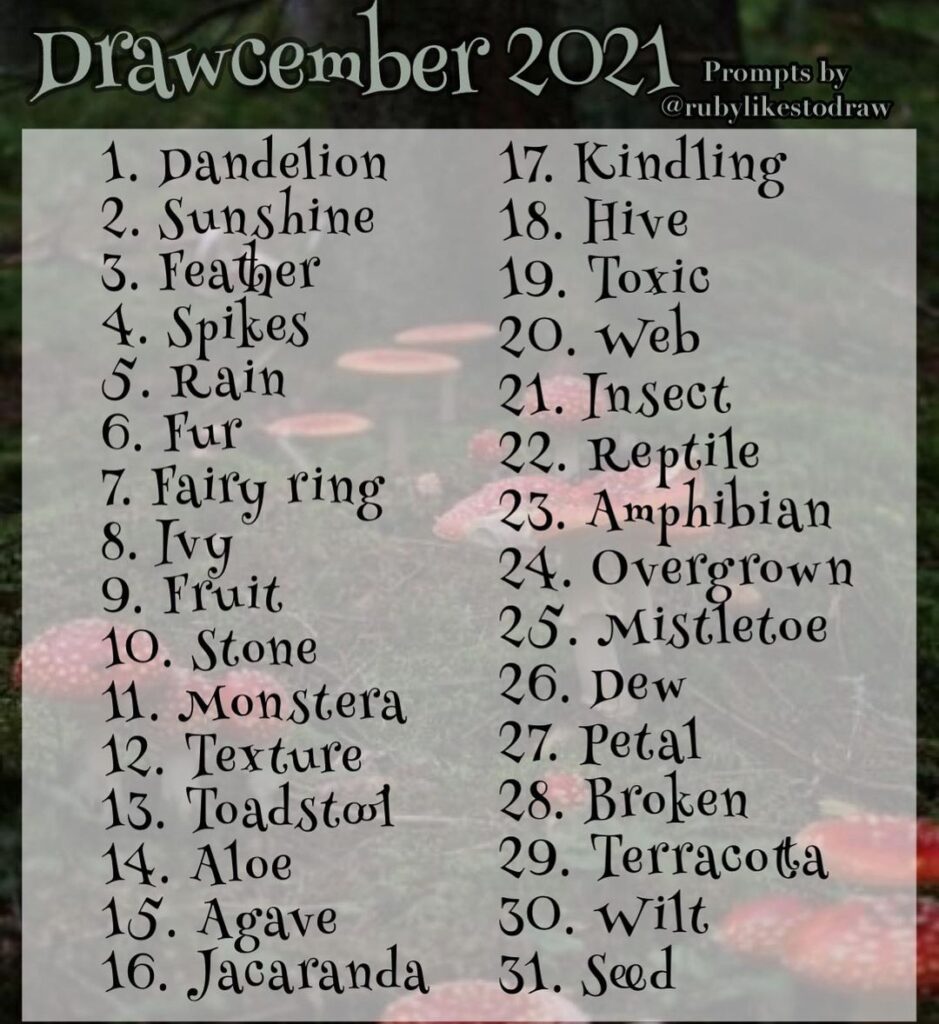 Here’s the list created by Dylan aka @dyl_Pixels. When the official accounts of Drawcember seemed to be dead, and no prompt list published (since 2019), Dylan created his own Drawcember prompts, and continues to publish them every year on his Instagram. 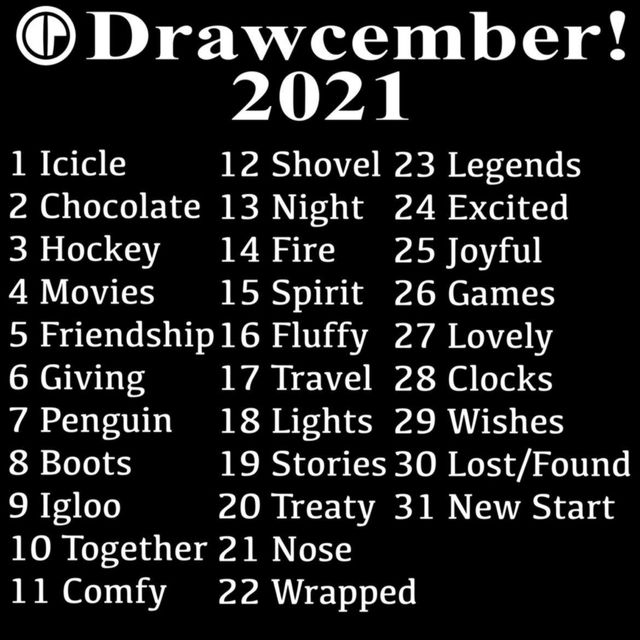 The Drawcember challenge was created by the Disney Create in 2012.

In 2017, the Drawcember was hosted by Wacom and CGSociety on their forum. You had to create a sketchbook thread on the forum, and post there your drawings with following hashtags: #DrawCember #MadeWithWacom #cgsociety.
The artists had a chance to win one of the 8 Wacom products and a review of your December portfolio by professionals from CG Society.

Below you can see the Drawcember prompt list from 2017: 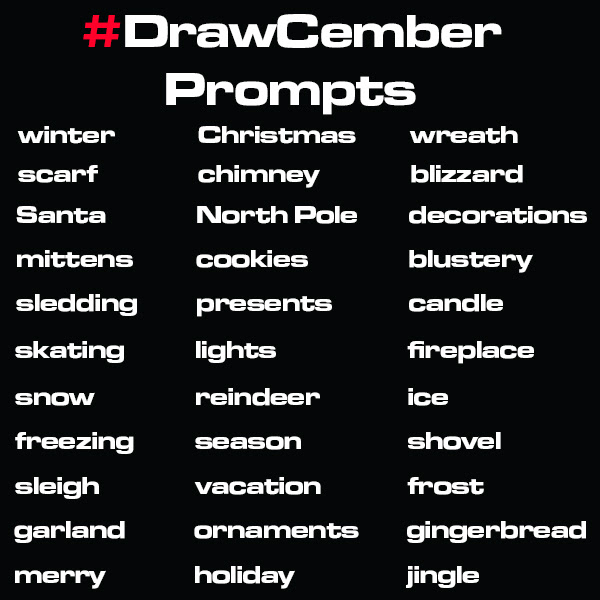 Later, on 2017 there was created a Twitter page for the Drawcember where a list of art prompts is published every year. The best drawings created for the Drawcember are shared there – to become noticed, artists had to publish their artwork by tagging @realdrawcember  on Twitter and use the hashtag #drawcember2018 (for the 2018 Drawcember). 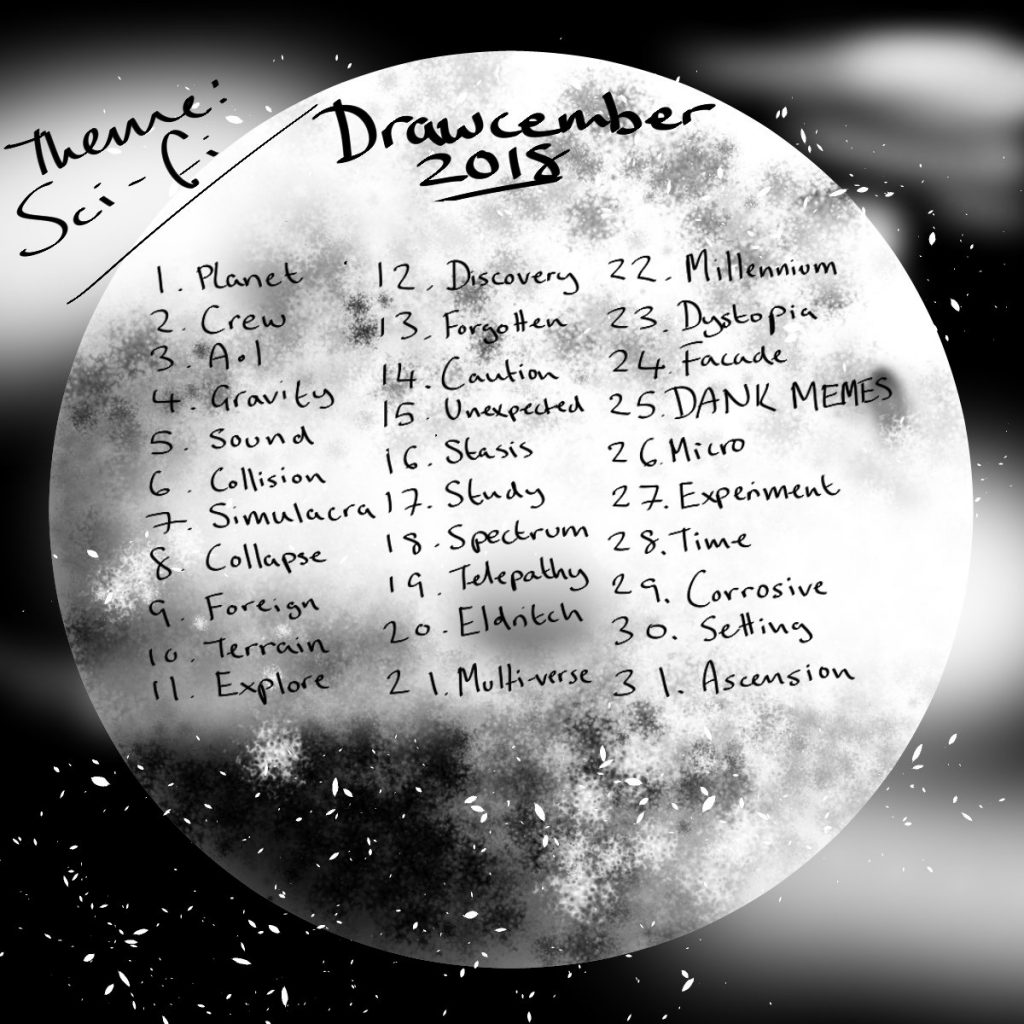 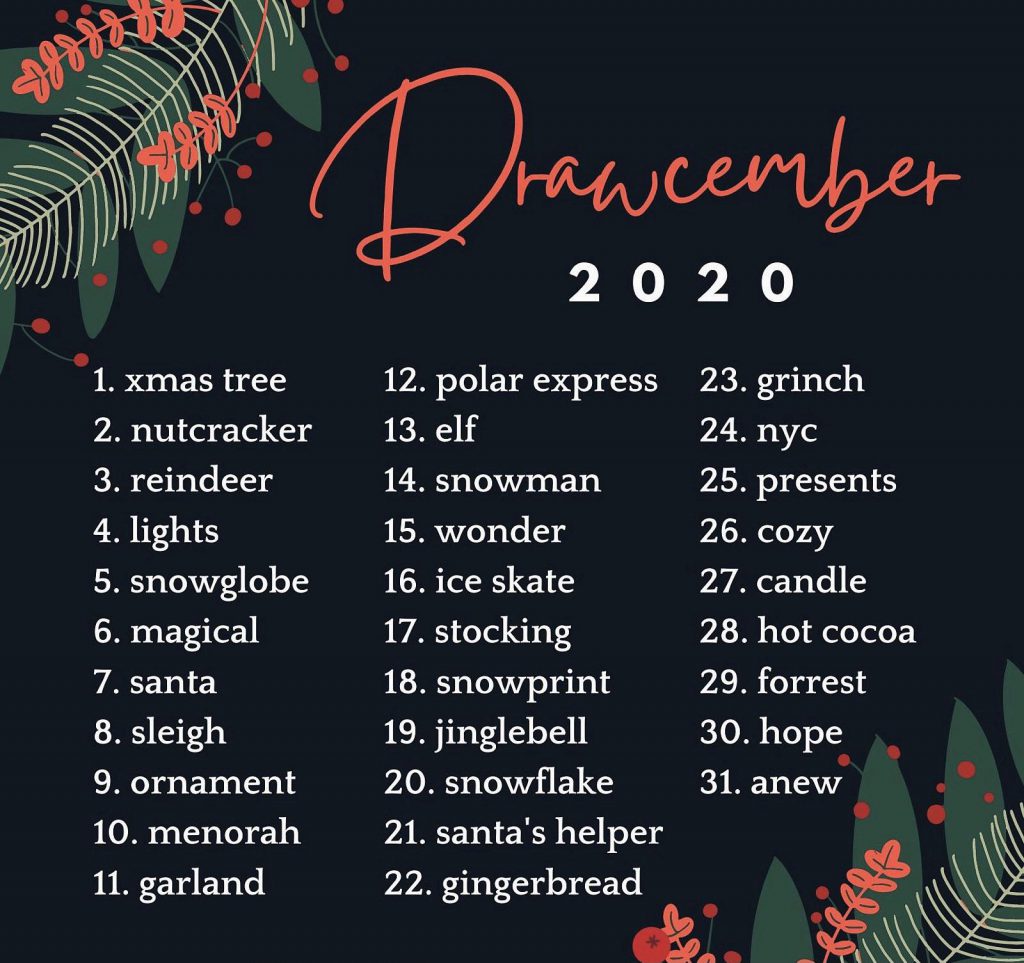 On 28 November 2020 a Reddit page was created, dedicated to the Drawcember challenge – r/Drawcember. A new prompt list was posted by a user nicknamed “do_hamsters_sweat”. So members of this community who participate in the Drawcember, mainly use this specific prompt list and post their drawings there. The community is slowly gaining new members and is still active in 2021, so if you want to participate in the challenge I encourage you to join the group! 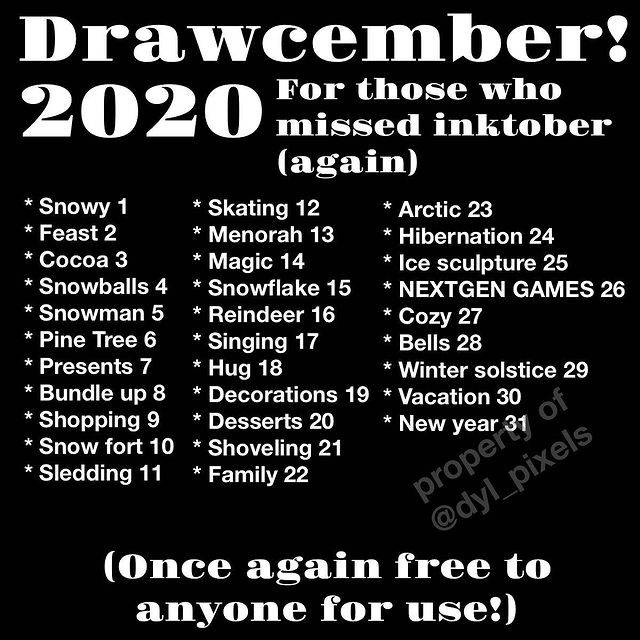 In 2020 It seemed that the (un)official accounts of the Drawcember challenge were abandoned. But the community never fails, and new lists with Drawcember prompts for 2020 were created 🙂  The list posted here was created by Dylan, you can find his artworks under the nickname “dyl_pixels”. Thanks Dylan! 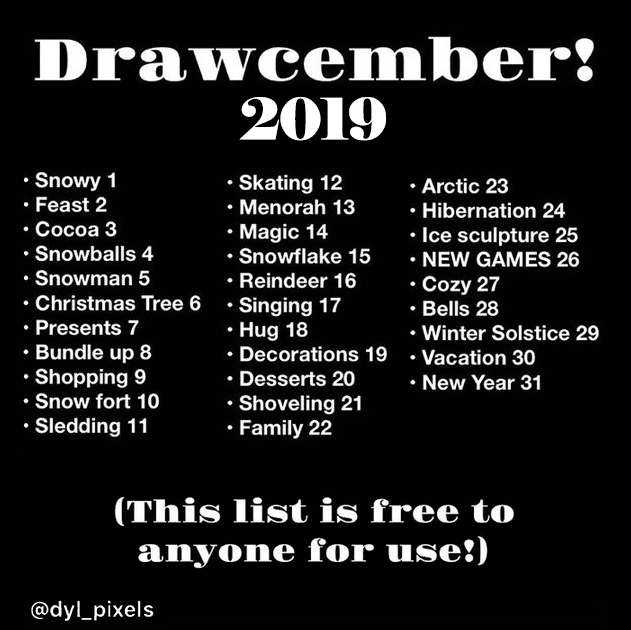 Do you participate in the Drawcember? Which prompt do you like the most? Let me know in the comments!