New series of Netflix , The Witcher has taken over the internet! And due to this, we have a wave of fresh and amazing The Witcher fanarts – but wait, what’s up with these #witcherOC and #witcherlass hashtags added to the arts? And those schools, School of Viper, School of Cats? Did I miss something?

Well, If you are new to “The Witcher”, or don’t spend much your time on social media, you may want to know what’s going on.

In this article, I will explain what’s the meaning of the #WitcherOC and #Witcherlass. Also, I gathered some amazing fanarts of The Witcher, and will add to them my note, explaining the Character’s name and it’s meaning.

I have also …a personal reason for writing this article, not only because I’m “The witcher”s huge fan, but simply because of a situation, where something that came from the country and the culture I live in, got so popular – it’s incredible.
And now, seeing people from other countries creating their own characters based on The witcher, and giving them slavic/polish names – it’s frikking hilarious! Guys, you don’t even know how much polish internet exploded after seeing your OC’s and their polish names.
And here’s my mission – I will use my superpower of knowing the polish language, and explain what their names mean -> I added comments to the artworks with explanations of the slavic names.

But let’s start with the basics.

WitcherOC  is a short for “Witcher Original Character“.
“Original Character”  means that the author of the illustration/story used his own, original ideas to create a new character, basing on an existing world/characters (created by a different, main author). Usually, the “Original Character” is placed in the same world as the “Main Character”, that inspired the artist – but OC does not exist in the real story, and is not recognized by the Main author.

So, WitcherOC means an original character created by a different author (not Andrzej Sapkowski), inspired by “The Witcher” books/game/TVseries.

#Witchersona is another hashtags, has the same meaning as “WitcherOC”. The hashtag is made from 2 different words: Witcher and persona.

*This topic is sensitive – if you plan to use your OC to make some money, you may want to learn first about copyright, or talk to a lawyer before selling anything.

#Witcherlass – this hashtag is two words combined together – Witcher and lass. It simply means a female Witcher.
Apparently, people are obsessed with female Witchers right now. I looked over the internet to find if there’s something more to this hashtags, and found some posts saying that women can’t be Witchers. I can’t find them right now, but it might be something that triggered people and made them use #Witcherlass hashtag in every Witcher fanart.

I’ve mostly read books, not play games, so seeing some of these schools surprised me. I’ve only known three schools from the books: Wolf, Cat and Griffin. Witcher school is a guild, to which a witcher belongs – the organizations which train and equip witchers. Below you can find a list of the witcher guilds:

School of Wolf – The school was attacked and destroyed by a crowd of fanatics. Only ruins were left – where many witchers lived during the winter, and only the fencing teacher Vesemir lived permanently. It’s said, that they focused primarily on fencing.

School of Cats – The Cat School has developed a witcher fighting style focusing on speed, precision and dexterity. Witchers using this style do not deal huge damage in regular combat, but they can inflict terrible wounds due to precise cuts aimed at weak points. Their equipment is designed to protect while ensuring freedom of movement. It is also the only school that accepted women as witcher candidates.

School of Griffin – Currently, the school is not functioning. Sapkowski’s books lack more accurate information on this subject.
The Witcher Games: The Griffins seemingly kept the original “knightly” values of the witcher order, and didn’t hold agains killing dragons. I will mention here the Witcher Jerzy of Kagen – his name is related to a Saint Jerzy, and important figure in Christianity.(in other countries known as Saint George). In Christianity, under the name of Saint Jerzy (George), there were formed many knightly fraternities as well as religious assemblies and knightly orders. There’s also a “dragon-slaying” legend about the Saint Jerzy and the Dragon.

School of Bear – witchers from this school were subjected to training focused on endurance. There is a certain emphasis on the Quen sign, it is possible that the training was to prepare them for more pain or injury.

School of Viper – Witchers from this school, in addition to basic knowledge about monsters and techniques to fight them, also had a lot of information about the Wild Hunt, which led them to speculate whether learning the truth about the ghostly retinue was the real reason for establishing the school.

School of Manticore – I couldn’t find much pieces of information about this school. Schemes for the grand master’s gear of the Manticore School can be found in Toussaint. On their basis, it can be argued that the witchers from this school emphasized alchemical abilities.

#WitcherOC and #Witcherlass.
Check out these amazing artworks, and visit the artist’s page! 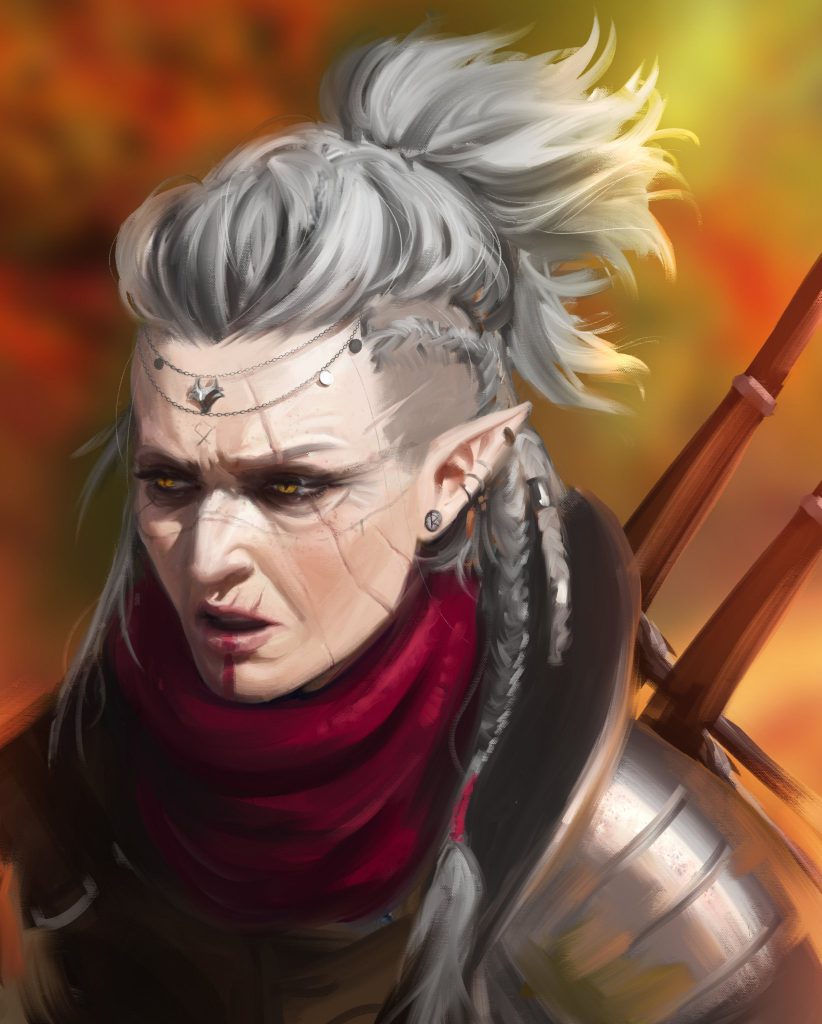 Morrigan, The Steel fox of Maribor

Enjoys vampire hunts by the moonlight, challenging witchers with Endrega venom shots and calling Vesemir “Old Man” even tho they are only a few years appart 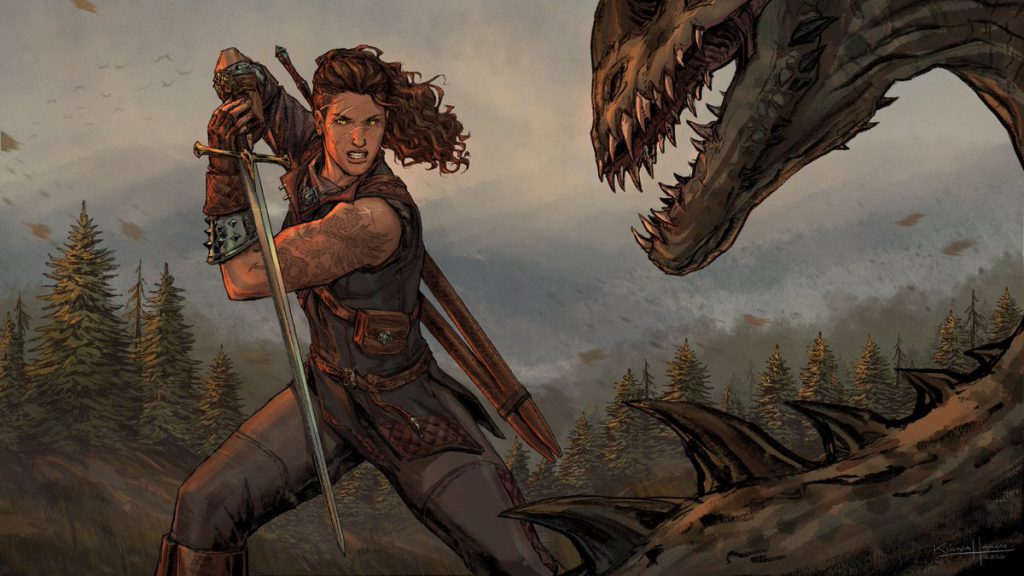 Kwyn, Witcher of the Manticore school.

Had fun making this #witcherOC over the holidays Bożena : The Griffin of Poviss #witcherlass #witcher 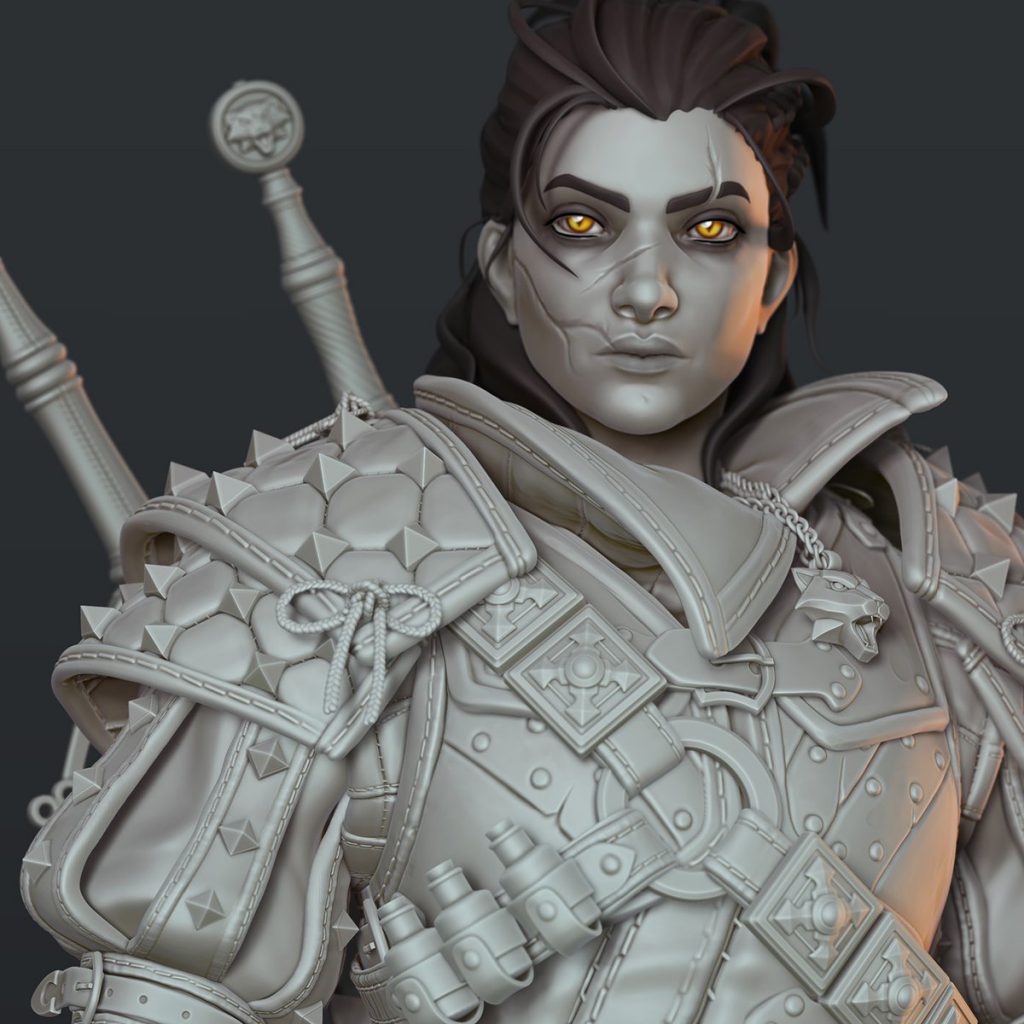 Going to call this done for now! Vesna, a witcher of the Cat school inspired by the game and the show. Sculpted and rendered in Zbrush. 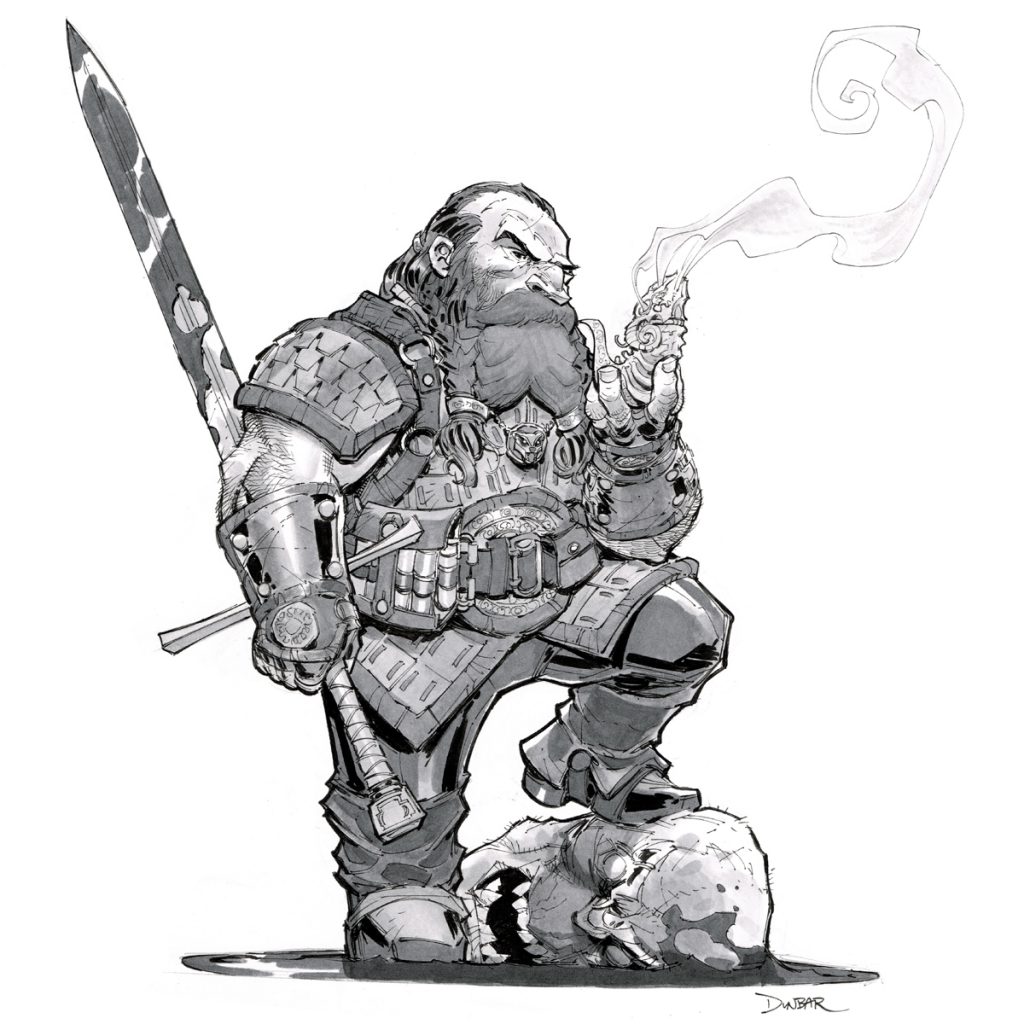 Thought it would be fun to draw a dwarven Witcher oc. School of the Stoat 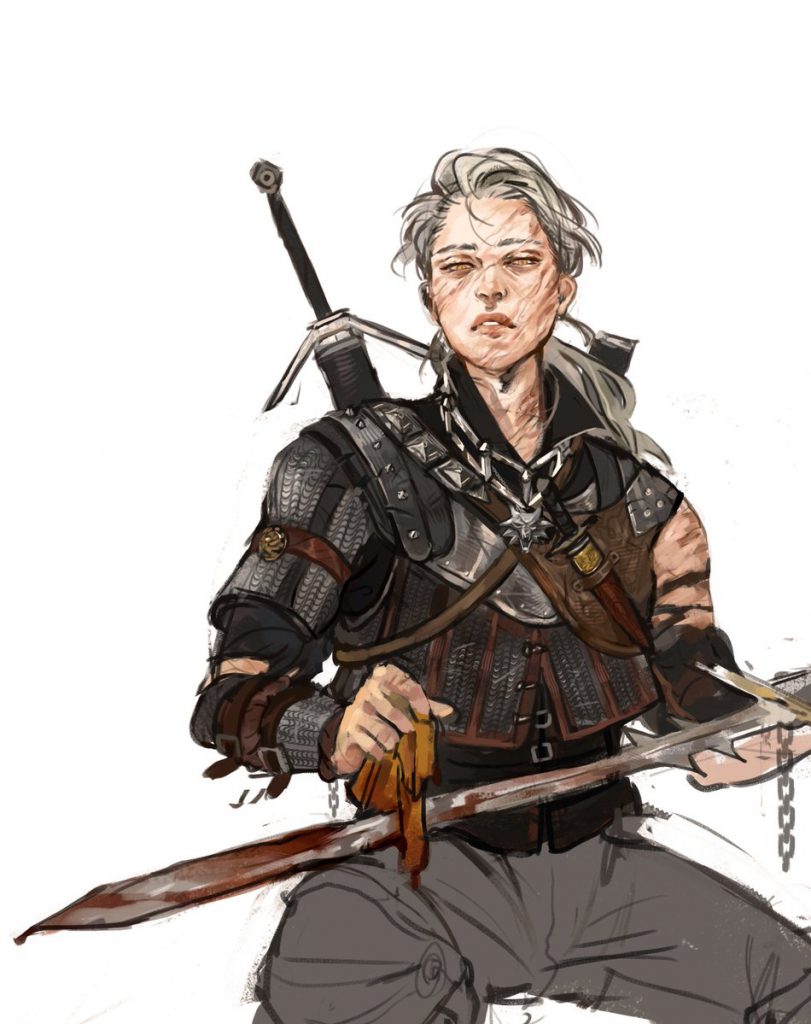 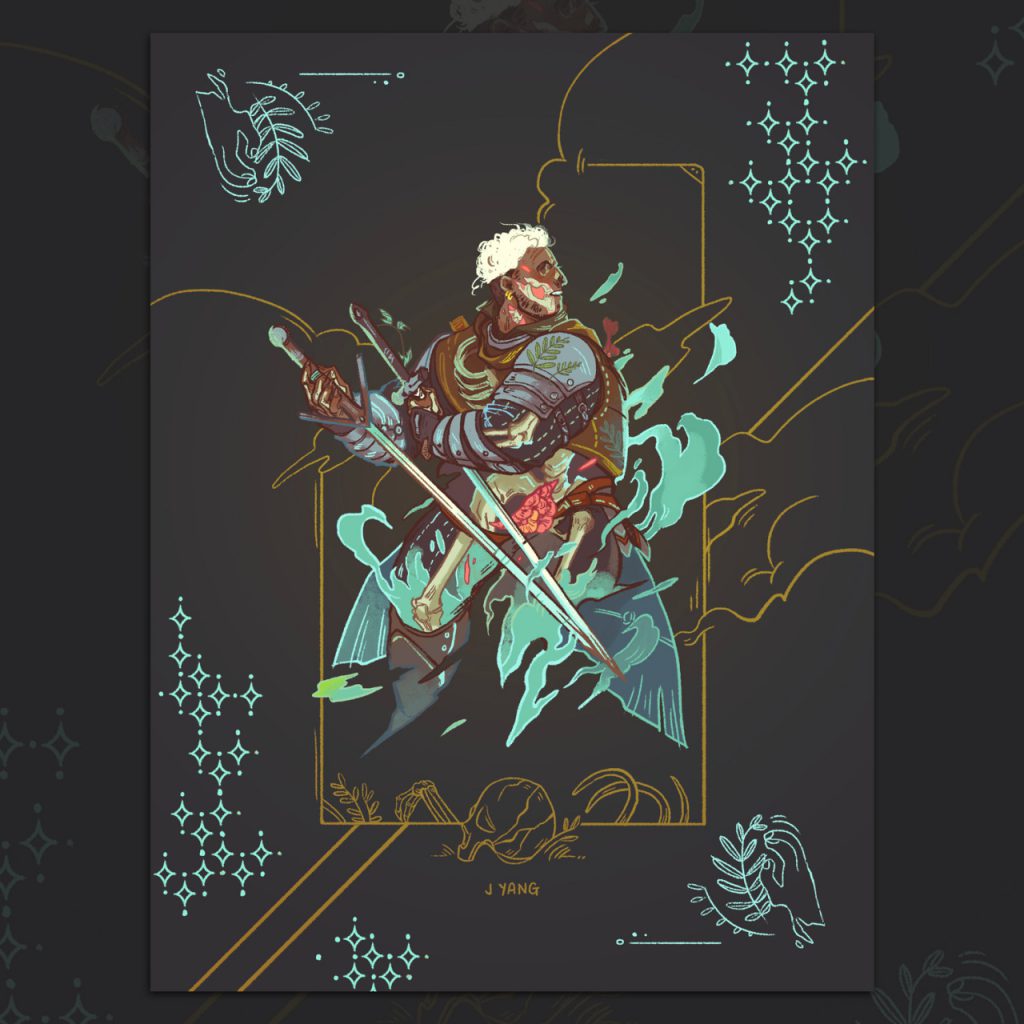 Ghost is a spectre of his former self, capable of taking a corporeal form & moving his swords for a few hours every day with the help of his horse Moo. School of the bear. 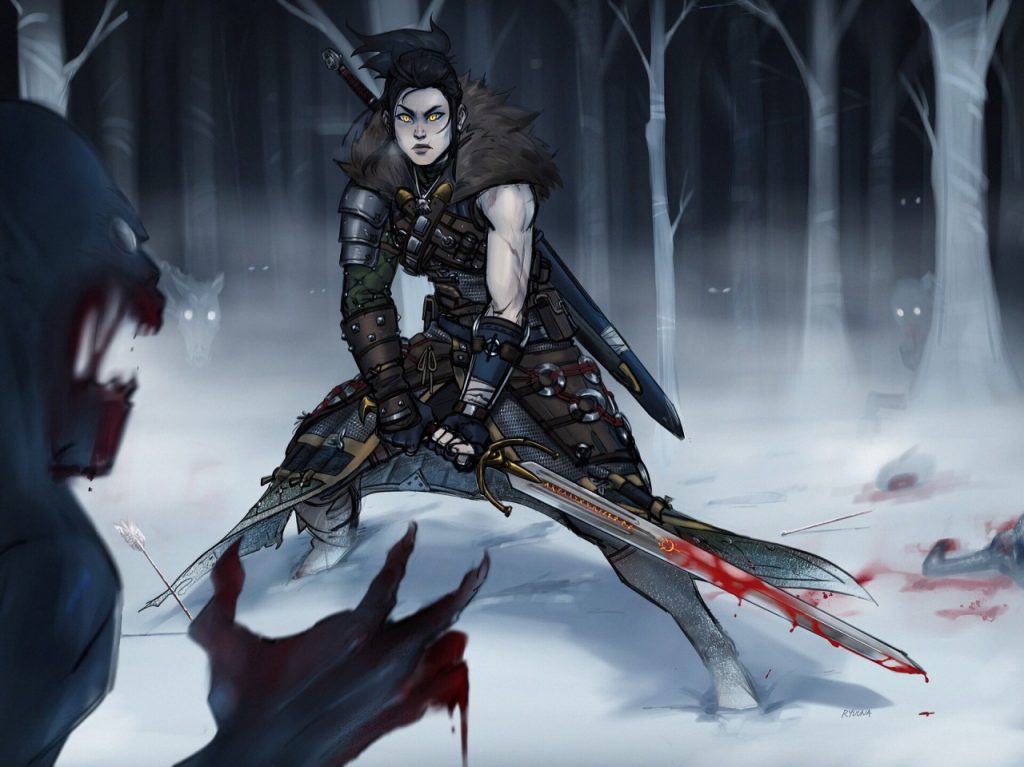 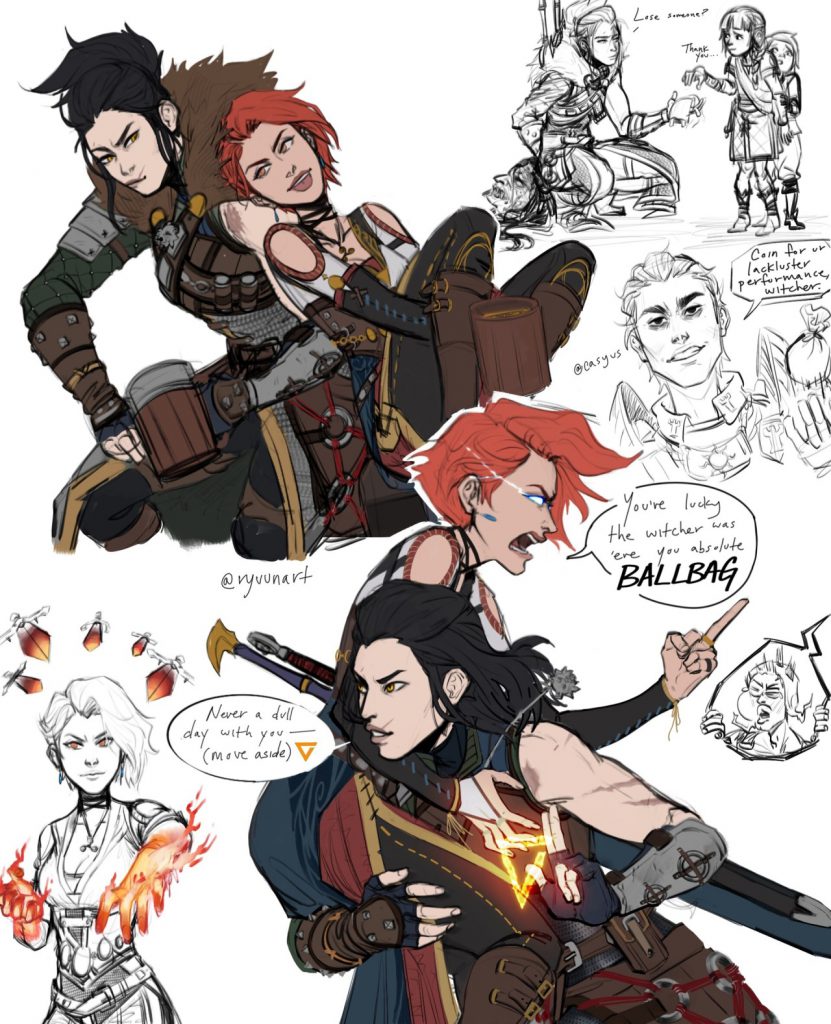 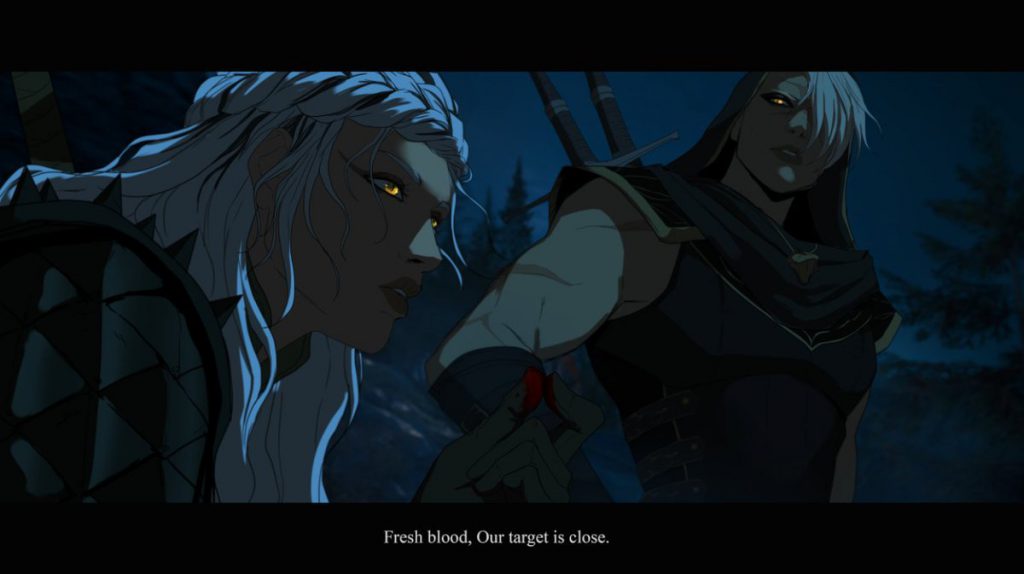 Witchers on the hunt. My griffin and @explodikid badass viper. Ive been wanting to draw some other peps witcherlasses #witcherOC #witcherlass 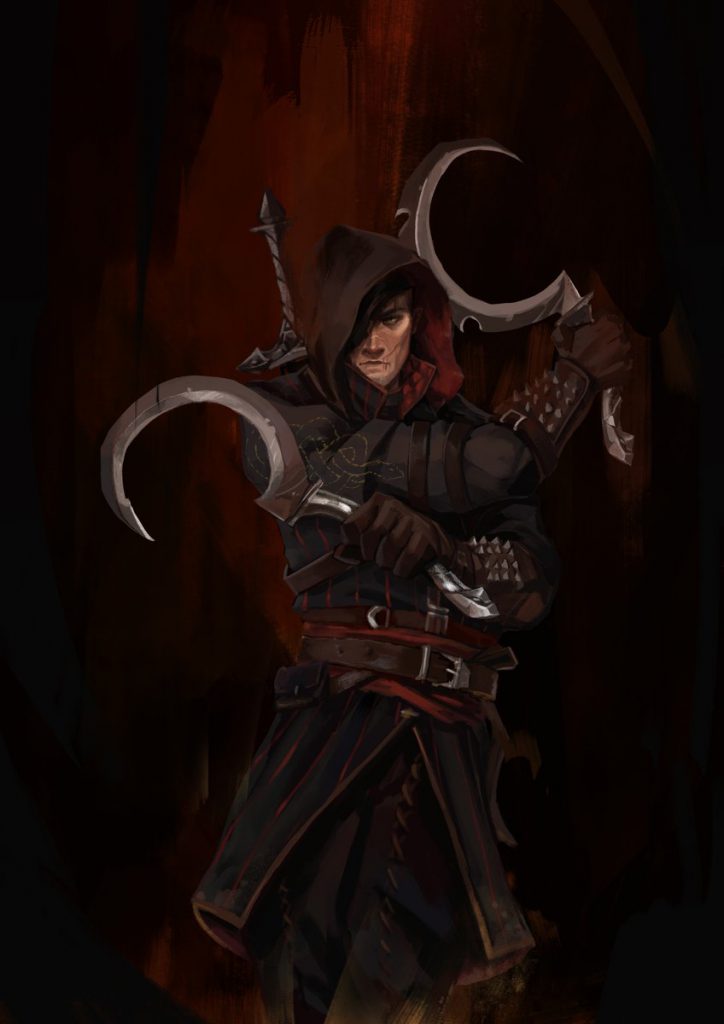 As always a bit late but I join with #Witcher #witcherlass #witcherOC AU version of my good old Oc Lazarus (In this case Lazar? I guess) Ofc he is in a school of Viper. 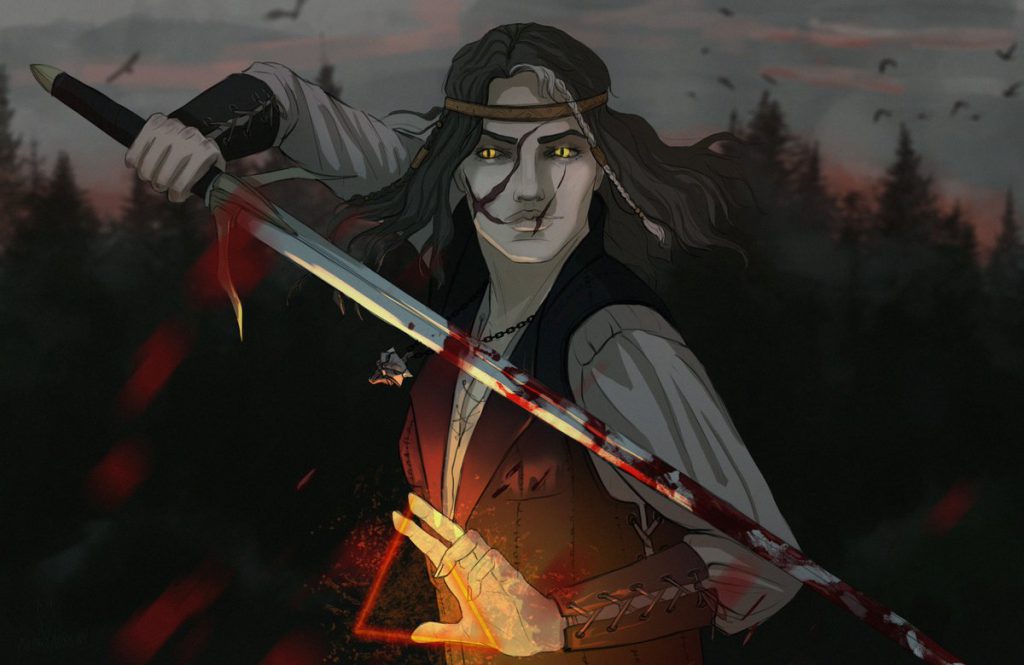 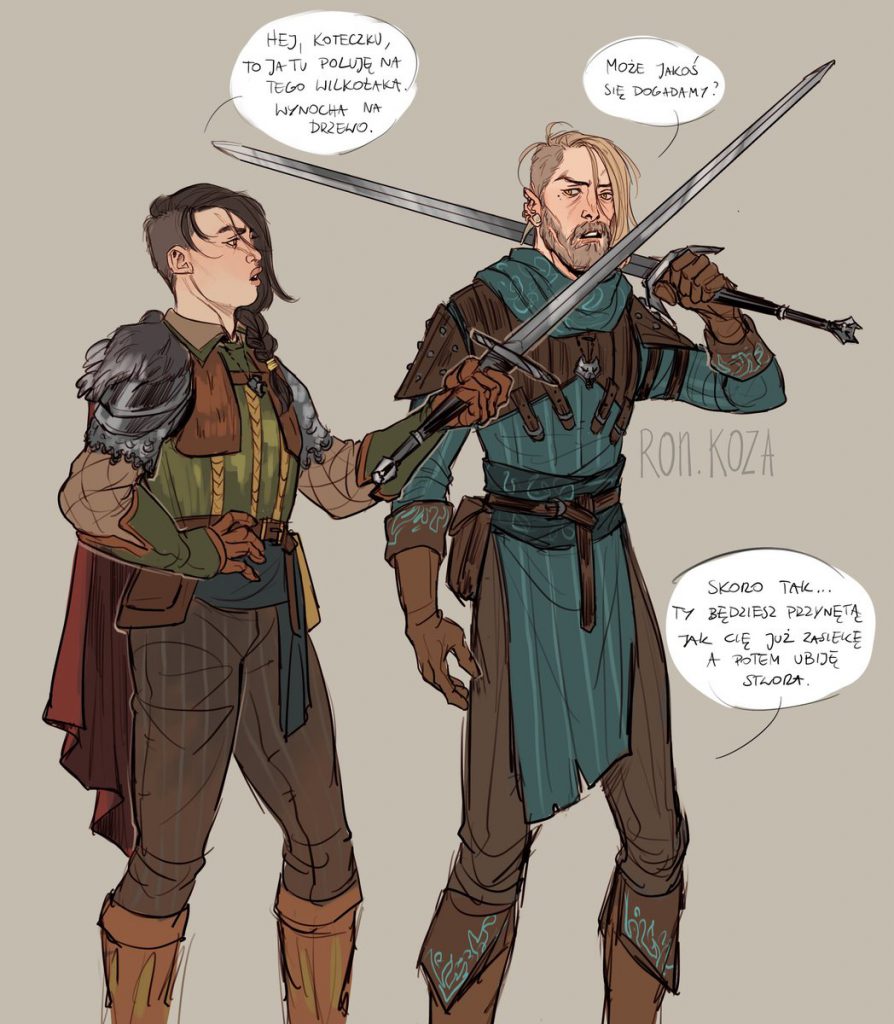 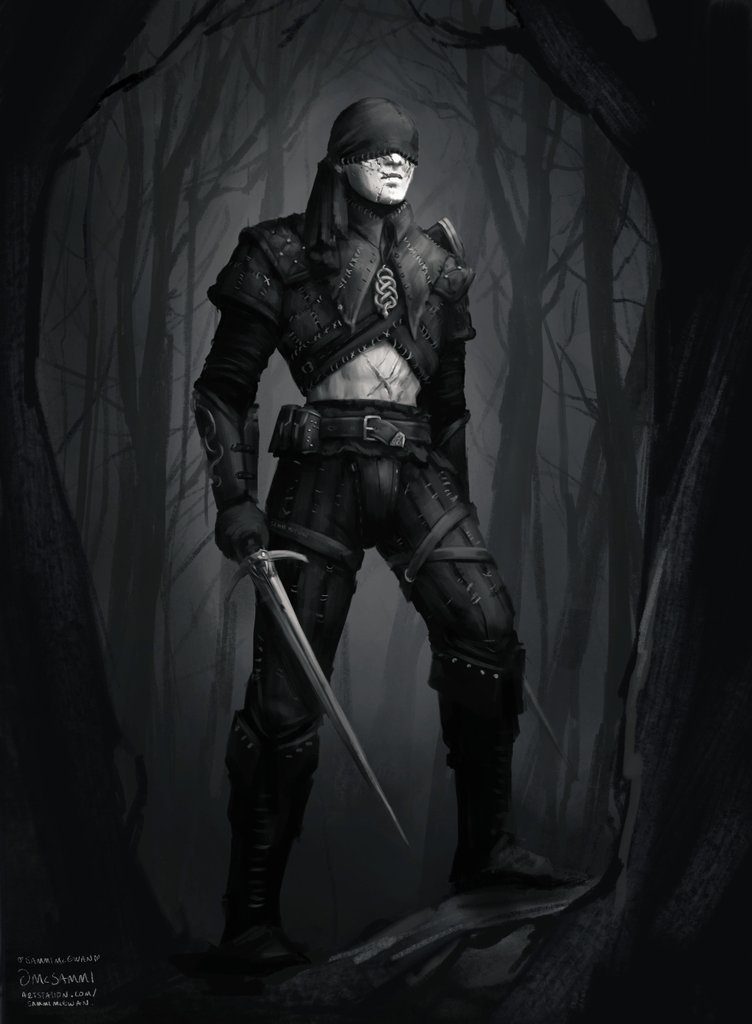 I’m going to say that this #witcherOC is done!

Felek is a blind Witcher from the School of the Viper.

I just wanted an excuse to paint a sassy mid-riff really. I put some braille on his potion pouch but one would hope that he knows which one is which by now. #TheWitcher 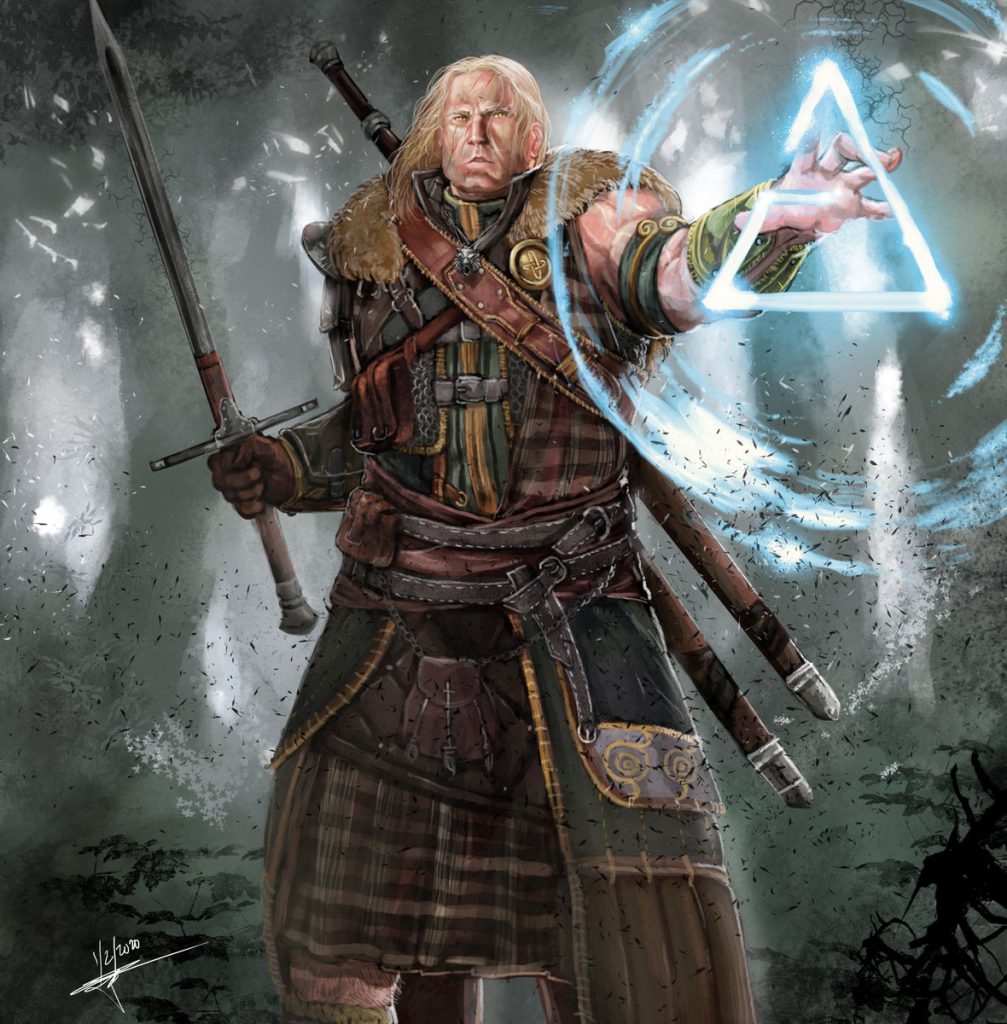 Ettin of Skellige, Mover of Mountains. a witcher of the School of the Bear. A solitary man, he has a legendary mastery of Aard and is known for his immense physical strength.