The graphic tablet is one of the most necessary accessories in the graphic artist’s studio. It unusually extends the possibilities of editing photos in a digital darkroom, increasing the precision. In addition, it speeds up work and offers greater ergonomics than a mouse. The complement is functional buttons, gesture support and touch functions. If you plan to purchase a tablet, you had probably come across a company called Wacom. But what about Wacom graphic tablet alternatives?

Why Wacom is so popular?

I will try to briefly explain this question, basing on the internet’s opinions and my own experience.

Wacom company has about 150 headquarters across the world. It was founded in 1983 in Japan. The number of high-quality products and constant improvement allowed the Wacom to become a leader in its industry. Right now, they offer about 21 different tech products for artists. Of course, Wacom is a creator of  more series and tablets, which are discontinued or replaced with better products:
– ArtZ, ArtZ II, ArtPad, ArtPad II,
– all Bamboo Products,
– Digitizer, Digitizer II, Favo, UltraPad, Graphire through Graphire4,
– Intuos through Intuos5,
– 15-, 17- and 18-inch Cintiqs, Volito, and PenPartner.

At the beginning, the company didn’t have many competitors.

Also, not many people knew what graphic tablets were. I remember when many years ago I asked at a huge tech market if they have any graphic tablets. They were looking at me like I was crazy, and had no idea what I was talking about. So, back then, if you were looking for a professional tablet and had a lot of money, the best choice was the Wacom tablet.

It was many years ago. Now, Wacom got many competitors, and we, the artists, have alternatives. Let’s compare graphic tablets and products from other companies!

Huion is company that was “born” in China, and achieves success since 2007.
Its logo is a representation of 3 pencils. The number three symbolizes in the Chinese culture “stability, balance, the tripartite confrontation and development”.

Huion uses independent innovations to build digital panel and screen systems, stylus pens and other professional product lines. At this moment, it has about 17 different models of graphic tablets.

My experience with Huion

Their products reached even my country (Central Europe). The first time I’ve seen their product, was at a discount supermarket – It was a Signature pad H420. At this time I didn’t know it was called “Huion”. The tablets were sold for a very low price without the brand’s name. Maybe because Huj means a “dick” in my native language (Hujowe – shitty) and they were afraid that the name might scare people from buying it? Who knows. I can just say that it was sold out after few days! The price was really affordable (about $17) for the visual arts students, so, many people decided to get this little tablet. Including Myself and my friends.
I keep it in case my Wacom decides to stop cooperating (just in case USB ports stop working). And It’s a perfect tool for the travel!

I believe that Huion is worth checking out if you are looking for a tablet. Well, Huion’s inspiroy G10T graphic tablet won the China red star design award which has the most powerful influence in china’s industry design world. There’s a reason why Huion started to be considered as a Wacom’s alternative!

A Taiwan-based company “KYE Systems Corp” created the Genius brand in 1985 , introducing its first mouse product. Since then, the brand has expanded in providing other personal peripherals connecting people with the digital world. Focused on quality, convenience and ease to use, Genius designs computer mice, keyboards, touch pens, headsets, speaker, webcams, and gaming devices to provide people with better user experience and with the best value for money peripherals in the mobile, living and business environments.

Genious MousePen 8×6 was the first tablet of Richardin Zapata (You can read his story here). It’s not this model exactly, but the newer ones come with a spare part and you can also buy them apart in case they get damaged – and that’s really important. He also tried to use Wacom’s tablet, and here’s his summary:

After seeing astonishing pieces of art made by some people, using nothing but their fingers and an iPad, I’m convinced that the tablet you get is not what matters the most. 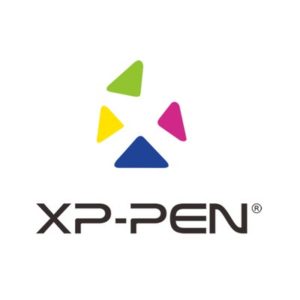 XP-Pen was founded in 2005, Japan and began its research and development of graphic tablets. It is a professional and reliable supplier of graphic tablets, pen display monitors, stylus pens and more digital graphical products.
The four triangles in XP-Pen’s logo represent professionalism, responsiveness, loyalty to customers, and green technology.

X-Pen has a huge variety of graphic tablets as well as drawing accessories. Right now, the company provides tablets from 3 different series: Star Series Tablet, Deco Series Tablet, Artists Series Display (with screen). Additionally, X-Pen in its offer has CP Series Light Pad. You don’t have to worry that you will have to buy a whole set if you broke your pen – you can buy for a small price (about 30$) in their online shop a stylus pen as a replacement. The price is a huge plus in comparison to Wacom (I remember when I broke my pen, I cried so hard – not only because I had school projects to finish, the price was like a payment for 2 months for living in my dormitory).

My thoughts on XP-Pen

To be honest, I haven’t heard about X-Pen before writing this article – and I’m really surprised with their products. Most of the tablets have express keys, 8192 levels of sensitivity, and the price is quite low comparing to tablets from other companies. I love that they send the pen in a case specially designed for it- that’s really practical, and would be really useful for me. Wacom also has a case – “A protective case for your Wacom Pro Pen 2”. However I’m not sure if you have to purchase it separately, or you receive it in Wacom Intuos Pro set – the Wacom Case is not included in the set on Wacom’s products site. 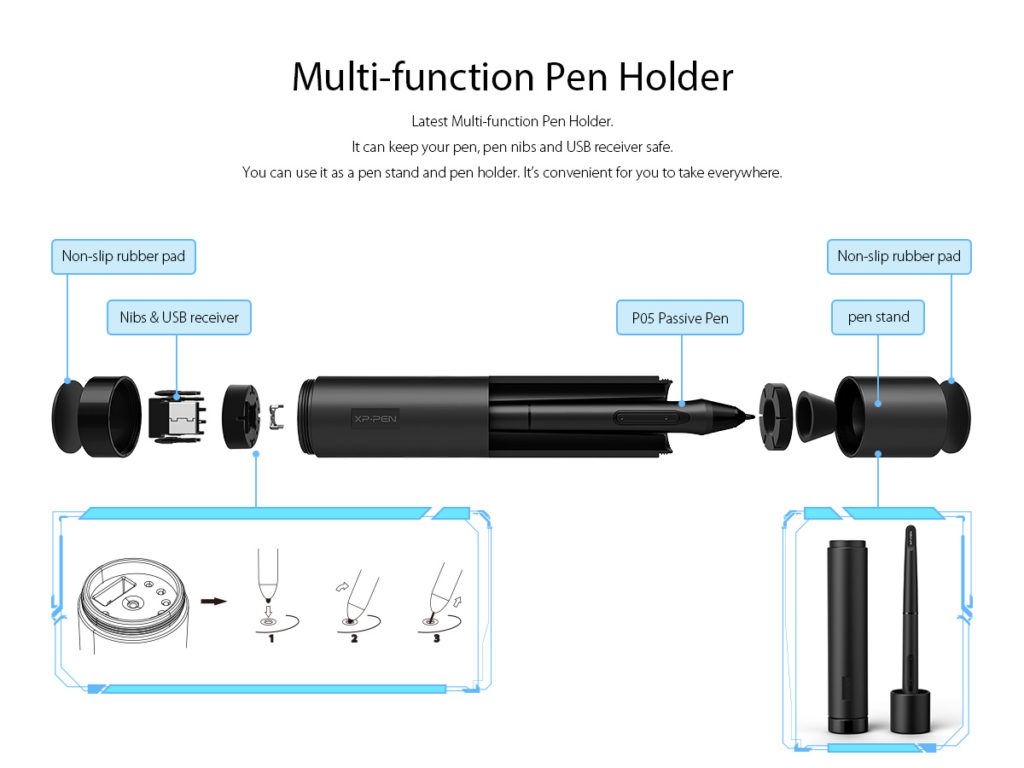 Oh, and there are also ExpressKeys Remotes! Wacom sells it’s remote for $99.95, while x-Pen offers its own product for $36.99. Unfortunately, I haven’t tried any of those remotes, so I’m not able to share my own experience and opinion which one of the expresskeys is more practical and convenient. I just keep using a keyboard for shortcuts while working in Photoshop – there are so many shortcuts that I doubt I could fit most of them in such remote. 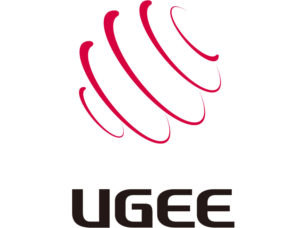 Shenzhen Ugee Technology Development the manufacturer and brand owner for UGEE.
It is a professional manufacturer specializing in research, development, production, and sale of pen tablets and pen displays. Founded in Shenzhen, China in 1998, they also established UGEE online drawing school, which served to help young artists learn about and improve their digital drawing skills.
UGEE developed about 7 different tablet models, 3 of them have a display surface.

If you break or lose your pen, you can purchase it without any problem. Unfortunately, Ugee does not have such accessories that you can additionally purchase like cases and external expressekeys. Of course the tablets have built-in expresskeys, so that’s not a problem. The pens are rechargeable, one person commented on Ugee’s facebook that the pen is too heavy.

Some users reported issues with the tablet after the big wave of Windows 10 updates (but I bet that it’s the same with other tablets, and it’s rather Microsoft’s fault). Most of the opinions are positive:

“I bought my UGEE HK 1560 some time ago and I am well satisfied, it is my second screen drawing tablet since I also have a 21 inch monitor tablet that i bought back in 2009.
Although the HK model could have some parts better positioned (like for example the cables) the tablet works extremely well and colors are brilliant, drivers are always up to date and on a plus the tablet came with a lot of extras (glove, extra pens etc)
Well satisfied customer that waits to see what else is there for the future.”

Aiptek was founded in 1997 with the headquarters in Hsinchu, Taiwan. The company produces mainly pico projectors, camcorders, graphic tablets and digitizer, as well as photo frames, and 3D products.
There are about 7 different models of graphic tablet available.

After research, I noticed that many users have problems with broken pens – more specific, you can’t buy pens separately. Some users had to buy the whole set in order to get a working pen.

I will keep adding more pieces of information and alternatives in the future.