In this article, you will find a List of Inktober Alternatives – Art Challenges that take place in October.

*Author’s comment: Hey guys, I can see that a lot of people are reading this article at this exact moment – I’m right in the middle of updating these challenges and adding new ones, so if there’s a challenge that you think that deserves a mention – please drop its name in the comment section! It will save me some time, THANKS! – Anna 20:13 Friday, October 1, 2021 (GMT+2)

If you don’t know what Inktober is, here’s a short introduction.

Inktober is an Art Challenge created by Jake Parker. Every October, an official prompt list created by Jake is published, and many artists from all around the world participate in it using the official list – or create their own “inktober inspired” lists.
The goal is to create a drawing related to the prompt associated with a certain day, for every day of October. The main medium is ink.

For more info and examples, check out this article: What is Inktober?

What happened? Why do people refuse to participate in Inktober?

You may have noticed in social media Artist dissing the Inktober.

The first problems occurred when Jake Parker registered “Inktober” as a trademark. A few artists who participated in the challenge, and tried to sell their artworks, received cease and desist notices for selling artwork and using the “inktober” name. 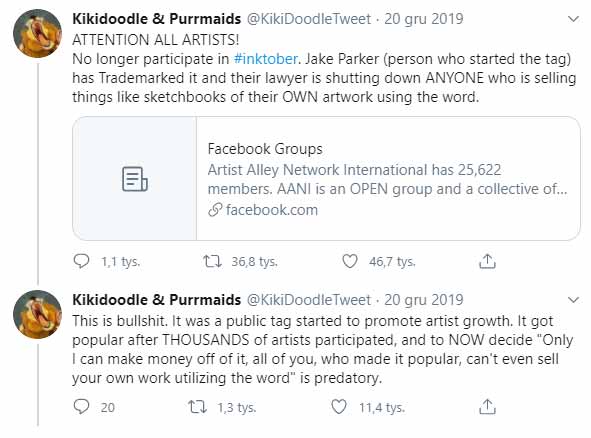 As of August 27th, 2020, Jake Parker (the creator of inktober) was accused by Alphonso Dunn of plagiarizing Alphonso’s book Pen and Ink Drawing: A Simple Guide, in Parker’s upcoming book ‘Inktober All Year Long’.

In a result, many artists are looking at other art challenges for October to participate in. Here’s a list of some art challenges worth checking out, many people also decided to create their own prompt lists – if you are one of them, let me know so I could include your challenge here!

This challenge has a very similar name to the infamous Inktober, it’s an alternative list made by Trish (@Trish_Argh).
The main medium is Ink, but the idea is a little different. This challenge focuses more on tattoo art, the point is to create illustrations stylized for tattoo designs. If you are a Tatoo artist, this might be actually a great opportunity to grow your art portfolio and come up with new amazing designs for your clients. 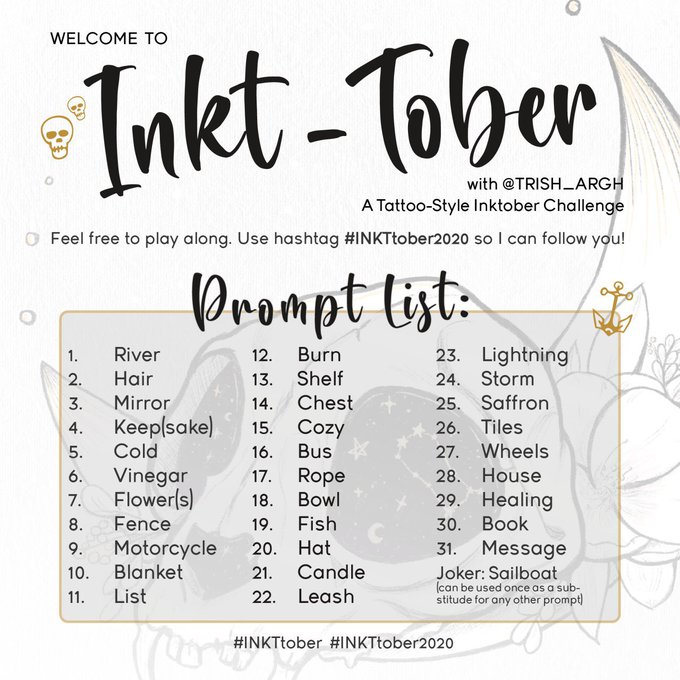 Here’s an alternative Inktober list created by Creamy (@ladycreamyy)
It comments she stated that there are no certain restrictions, and you don’t have to draw every day – the most important is to have fun while doing the challenge.

Creamy also says that she tried to make a list for people who like to create backgrounds and conceptual things to have more space, but if you want, you can do more simple drawings. 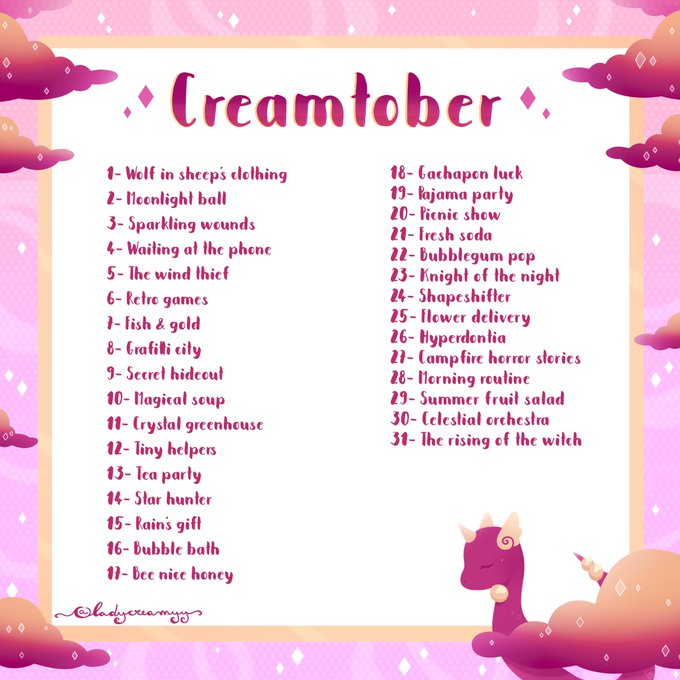 This alternative Inktober challenge is probably known to those who participated in Inktober in previous years. I remember it was quite popular last year.

I don’t know much about the origins but the earliest prompt lists I found are from 2017. Some people combine it together with the Inktober list.

The main subjects are Witches and everything related to them. Many artists use the prompt list as an inspiration for the Witch’es appearance design.

There are no restrictions on what art media you can use, many artists choose Ink, however, I’ve seen also artworks made with watercolors and tablet.

Below you can find a few Witchtober prompt lists created by artists, you can use them – remember to add the author’s hashtag.

This challenge is one of most popular inktober alternatives, and already has many fans, so there’s many variations of prompt lists. I couldn’t find any official list, but these created by artists for themselves are shared on social media, and you can use them. 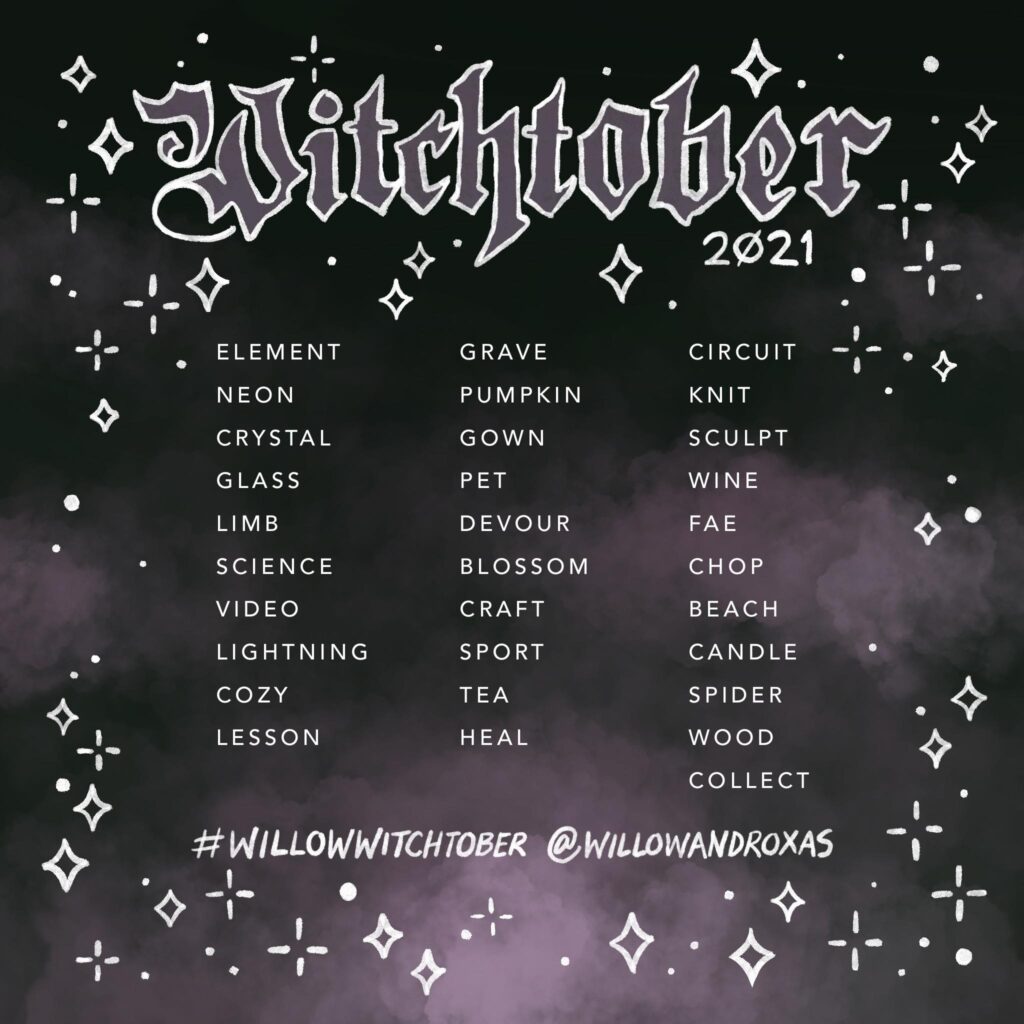 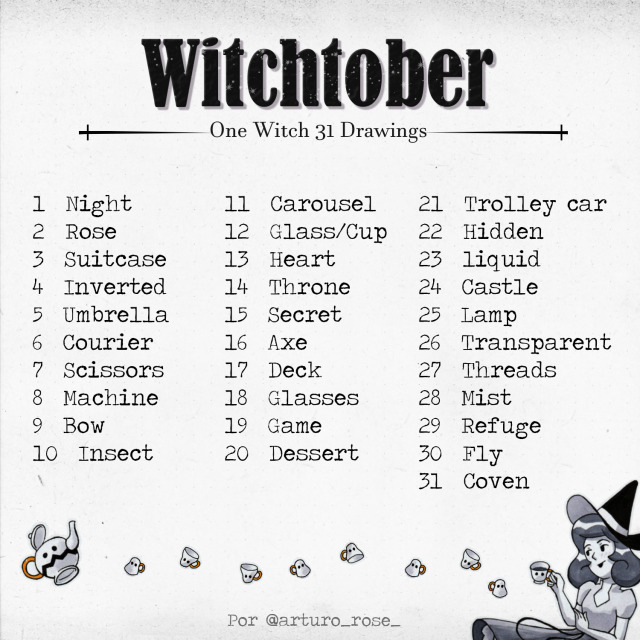 Monstober is an art challenge that features monsters.

There’s an official website dedicated to this challenge: monstober.art – you can find there all official monstober prompts published since 2016. 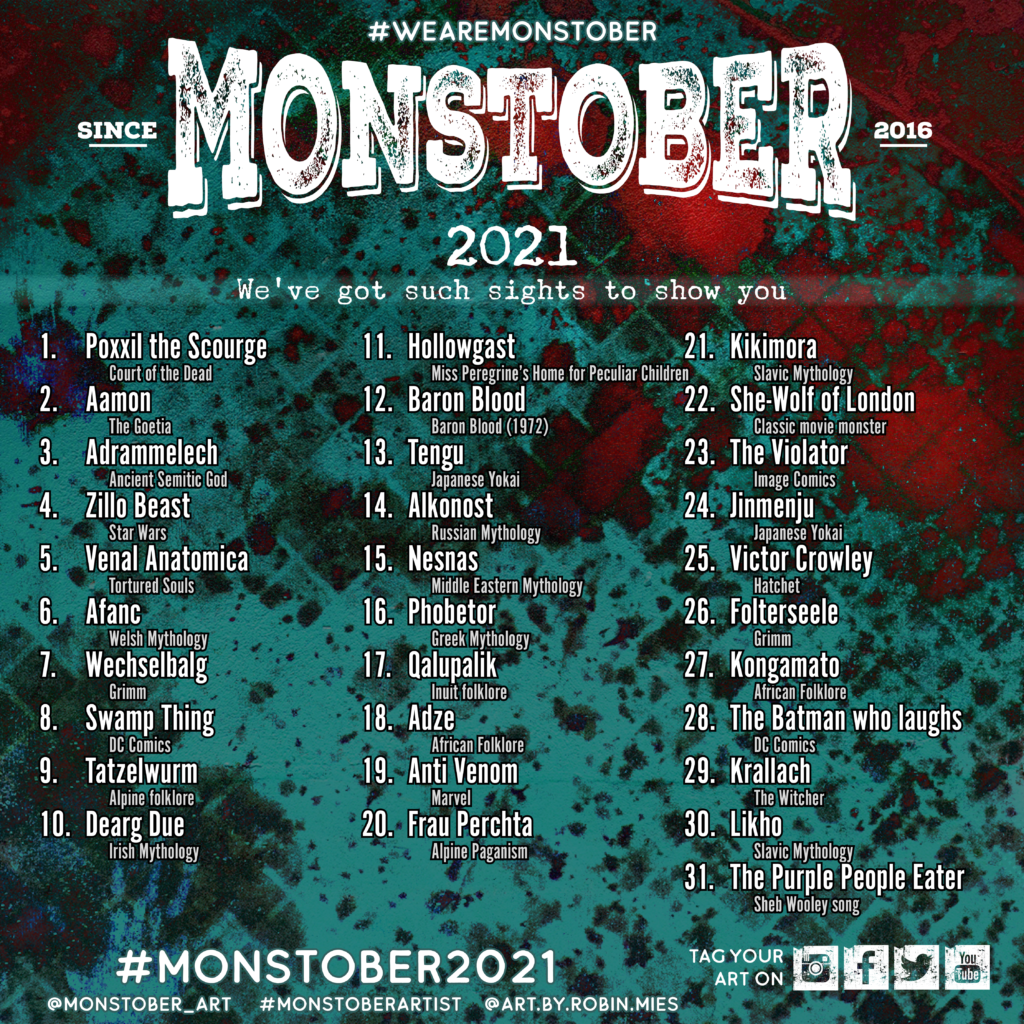 Goretobers is an art challenge that gives artists a different and new drawing prompt every day that revolves around gore.
First mentions I’ve found about Goretober are from 2014.  Some artists try to combine inktober and goretober together. There are no restrictions to any tools, you can use traditional or digital media. 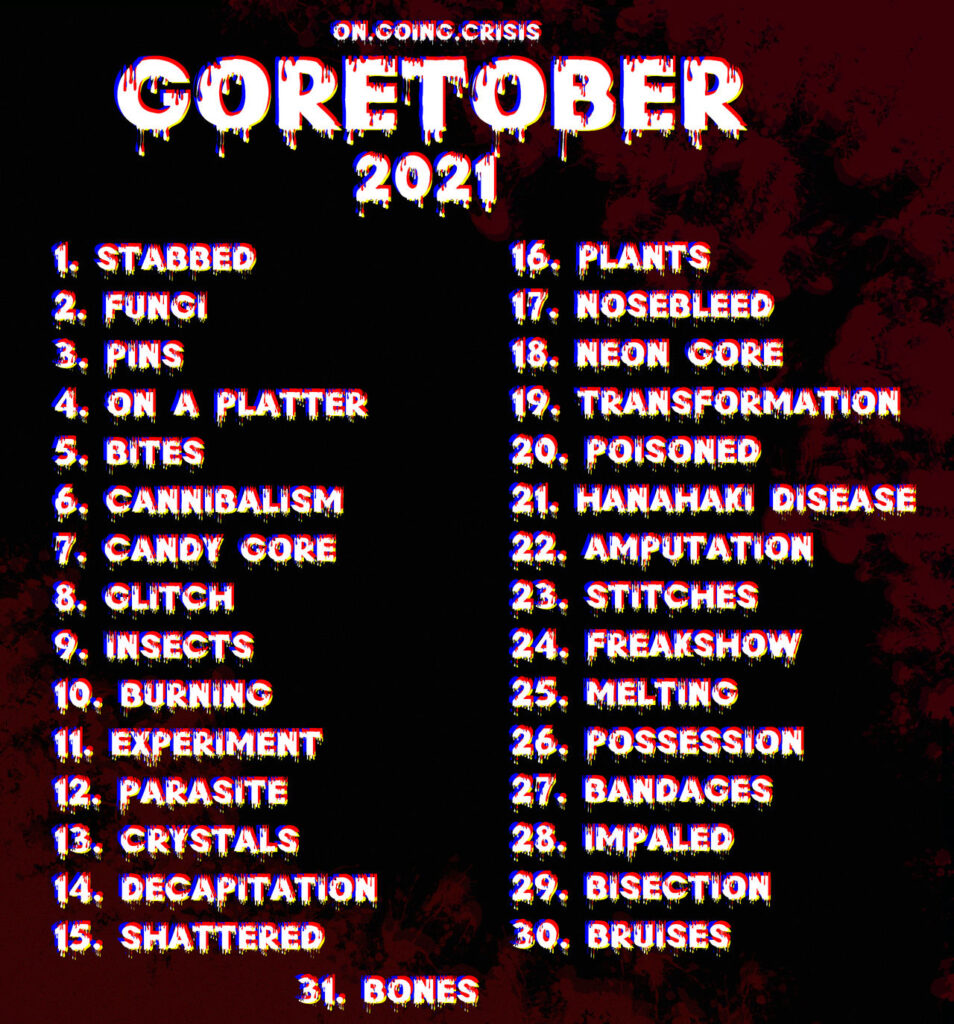 OC tober is an art challenge that features “Own Characters”. It focuses on the characters you have created and include in your illustrations. Some artists have lots of “OC’s”, so this is a great opportunity to draw them, or introduce the new ones.

First mentions about this challenge are from 2013. There are no restrictions regarding art media – you can use any tools you need. 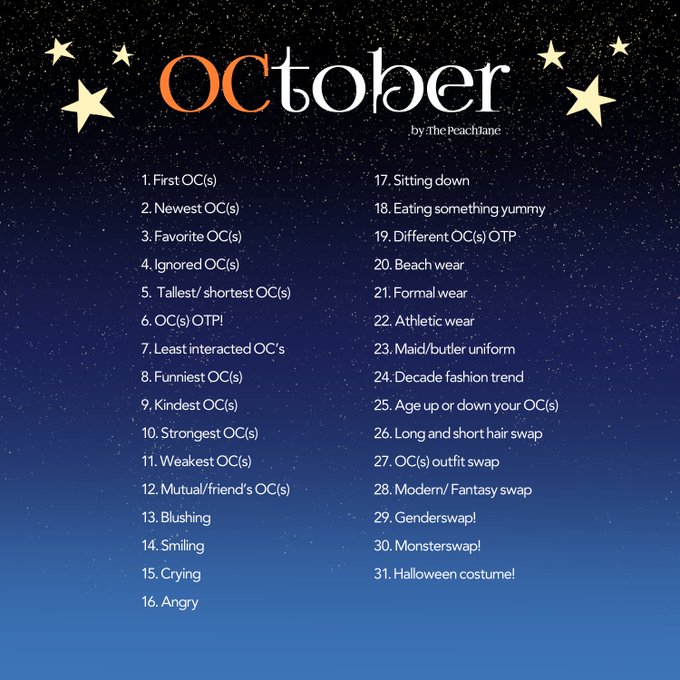 *related to the above challenge

A relatively new art challenge, the earlier list I was able to find is from 2019, created by Ocean. The artist created prompt list for the following years and participated in this event every October – there are no rules, and as stated by another participating artist – “you can use the list even if you want to draw characters of other genders”. 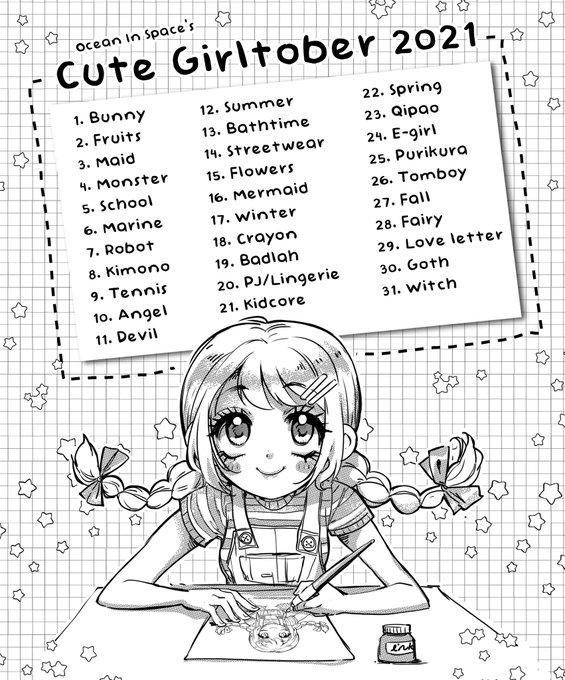 Another great suggestion for inktober alternatives. Drawlloween is the Halloween-based art challenge started by Brian Soria in 2012. Inspired by Jonathan Coulton’s “Thing A Week”, it began as a series of warm up prompts for his Austin-based “Society of Malice” art group. The challenge found it’s way to online art forums, took off and is now enjoyed around the world. 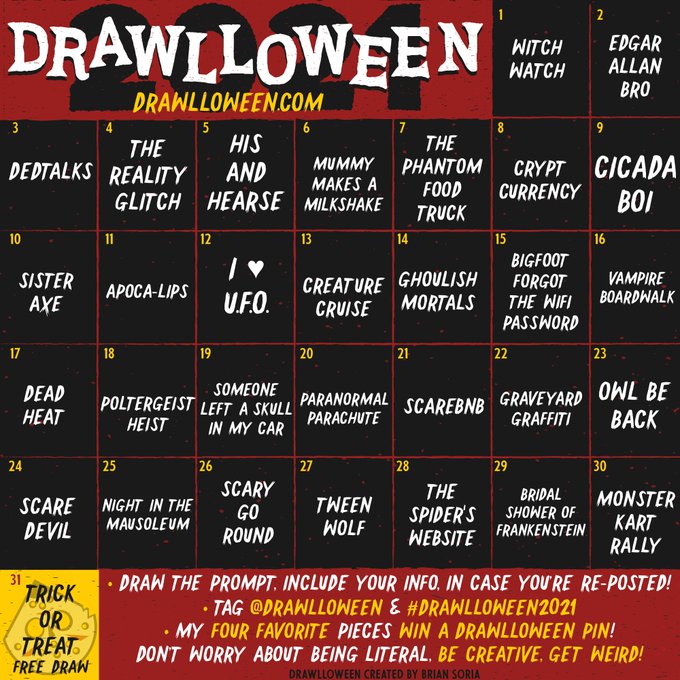 If you love fantasy, rpg, D&D and similar stuff, I might have something perfect for you 🙂
Here i present to you the ORC tober, and art challenge featuring orcs!

Orctober started as a month long celebration of Orcdom across the internet. The first mention I’ve found is a post written by Erny, in 2013. People celebrated it by talking/writing articles about orcs, discussing some game strategies involving orcs, books, comics, action figures etc. It was spotted by artists who wanted to participate in the event, in their own way of course – by drawing orcs.

There are no limits and restrictions regarding art media. Every day you have assigned an art prompt, that serve as inspiration. 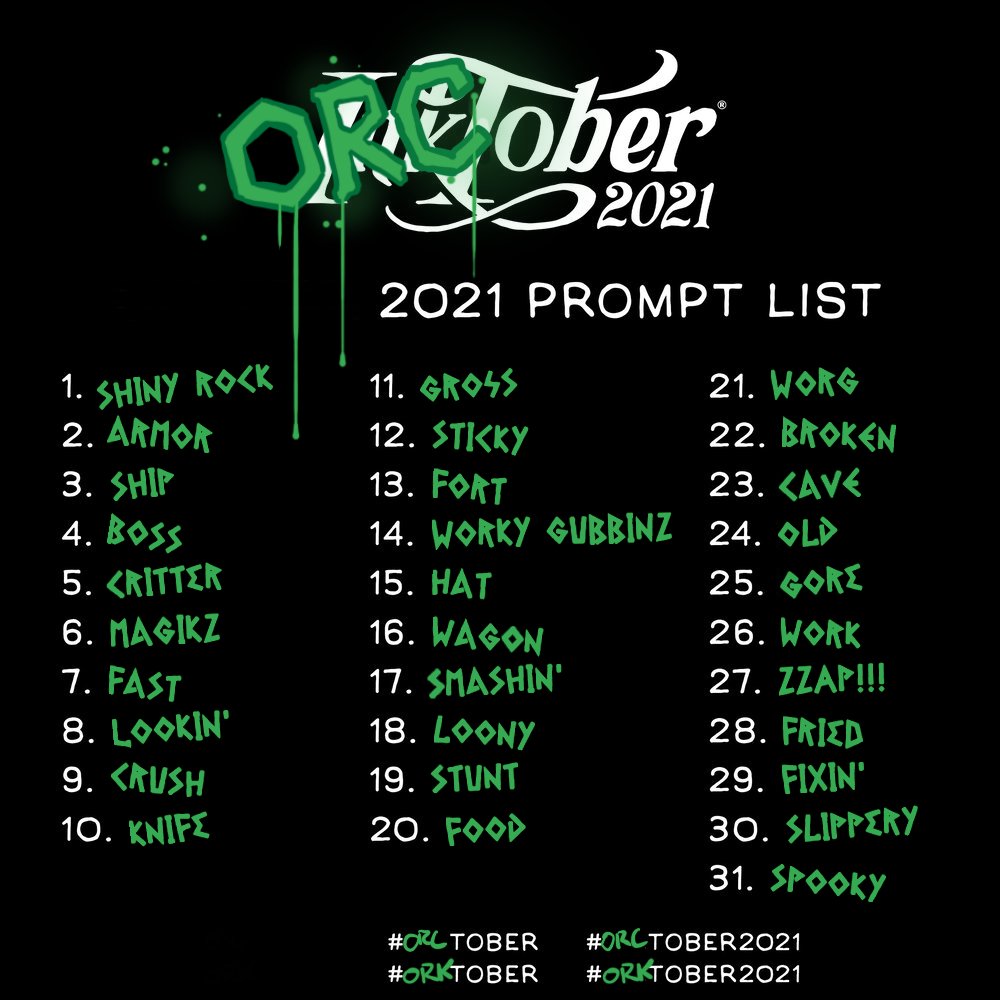 Drawtober was created in the spirit of Halloween and hosted by Vonnart, Gawki, and Diandrapopart.
This year they wanted to theme the entire challenge around the origins of Halloween.
This time the challenge is divided into 6 sections, each one last 5 days and features a different prompt inspiration.
Basic rules:

Info from the creators:
“Every day during Drawtober, our hosts will select one submission that is extra creative with the prompt and that artist will receive: A Drawtober Beanie, An Exclusive 2021 Drawtober Badge and a handful of Halloween Goodies!”

–
“Be sure to use the hashtag #drawtober2021 for your chance to be featured, reposted, and to win the coveted daily top pick! (More on that, the official posting rules, and what treats you can gain later this month)” 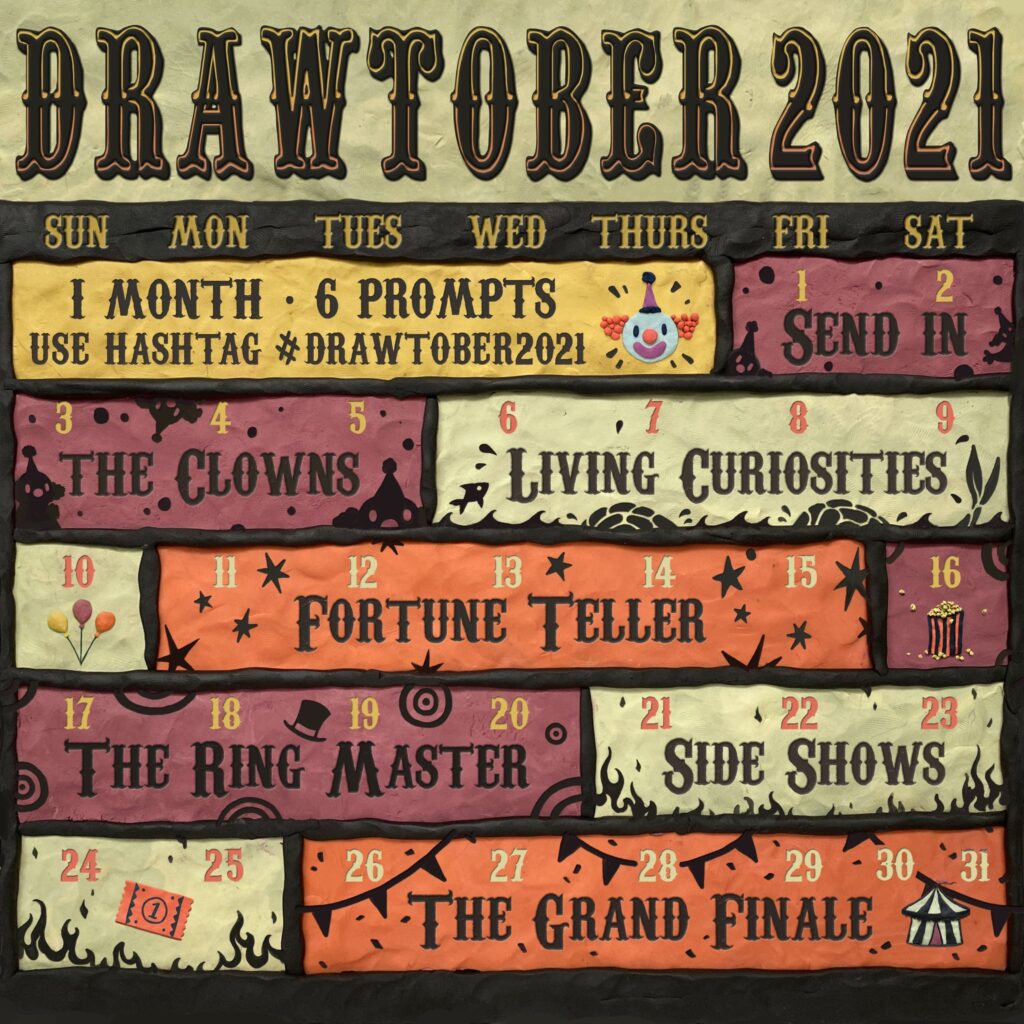 Darktober is an art challenge that provides some “Dark” prompts, related to Halloween. Its goal is to create a drawing every day of October, inspired by the prompt list.

The name “Darktober” was used for few other events. One of these events takes place in one of Pokemon franchise games – by solving all the mysteries and figuring out the secret code, you were in for a chance to win a special prize: Shiny Darkrai.
Other events named DarkTober are game jams. It was dedicated to game creators:

DarkTober is a game jam that goes on during the month of October and is hosted by yours truly, 5targuy. The goal of DarkTober is give creators an opportunity to challenge themselves to create a game that is somehow dark or centered around the idea of Halloween.

There are of course also Darktober prompt lists dedicated specifically for artists. 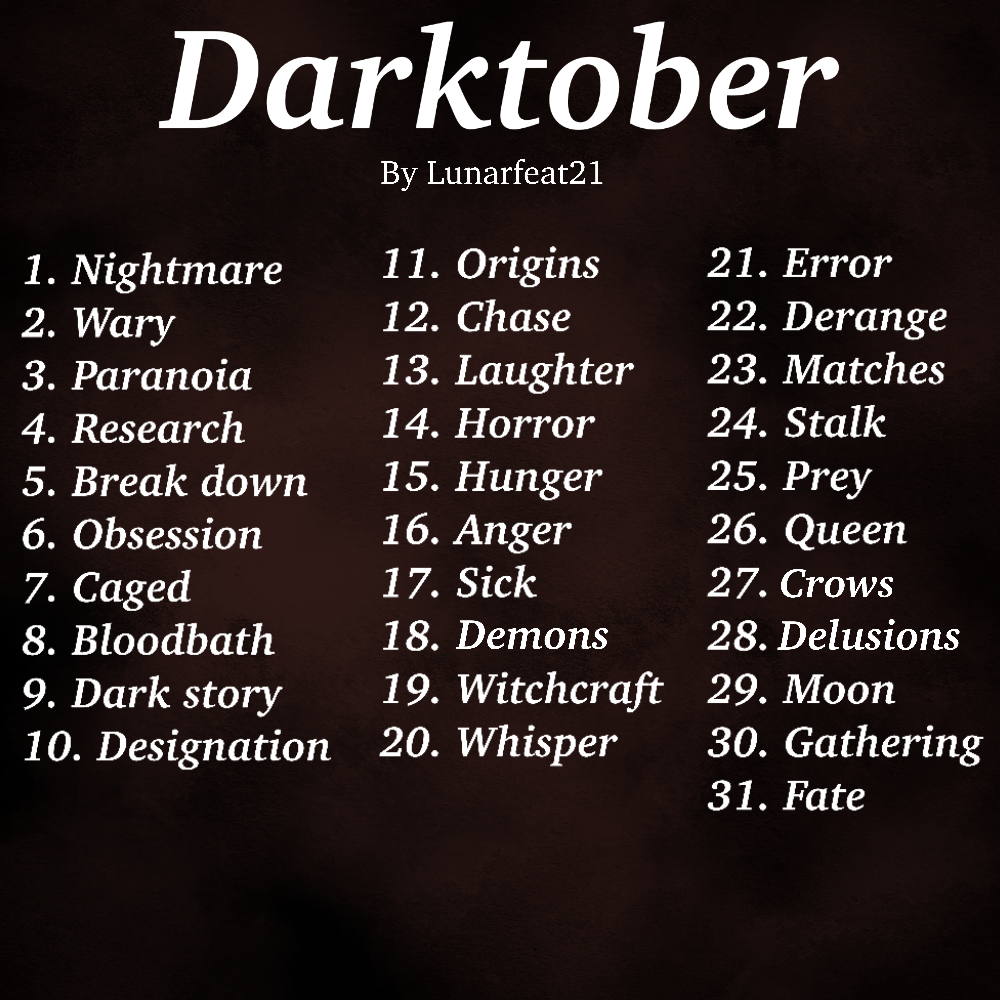 If you want to do the weekly prompts, either just take the weeks headlines (“Nature strikes back, High tech low life, Faces, Daily Adventures”), or you could pick your favorite daily prompt from that week! 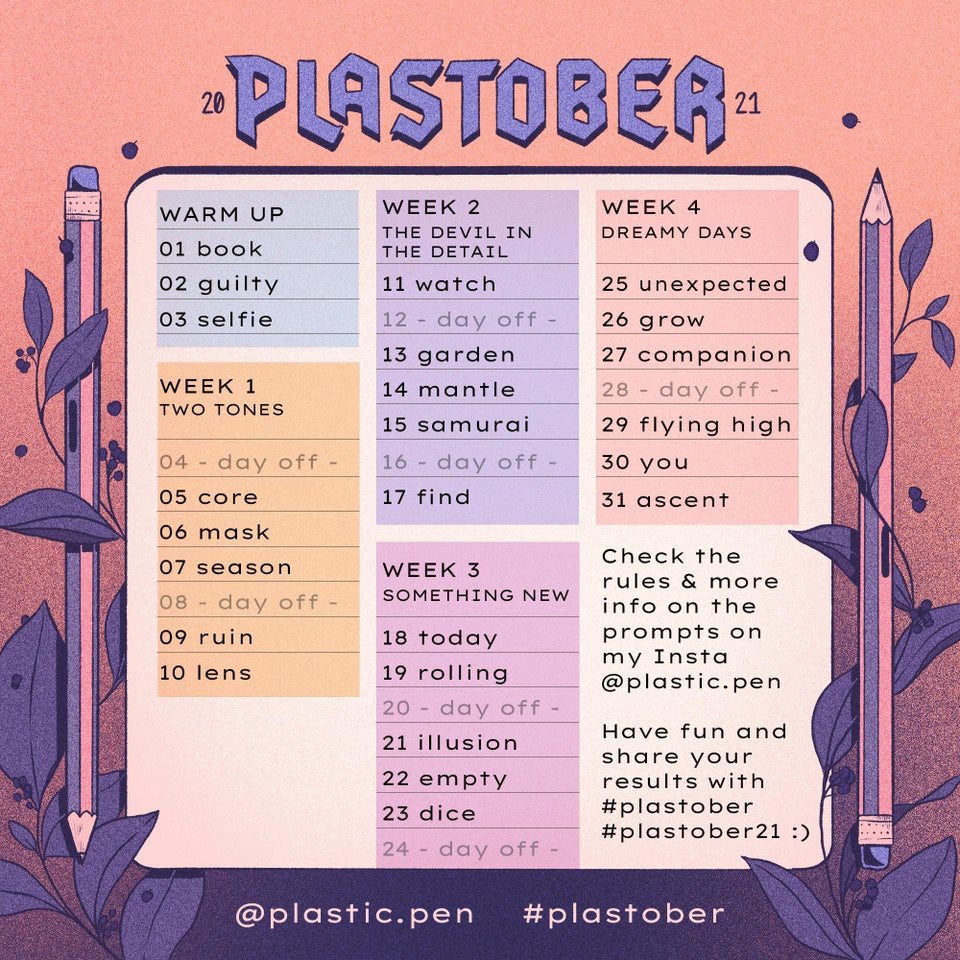 Spooktober is a challenge with art prompts revolving around Halloween topics.  What makes it stand out are the extra rules added to the challenge: the color of the prompt’s text defines what you can draw. If the text is green, you draw a witch, pink – a vampire, and blue – monsters, ghosts, zombies and batgirls.
You can use Ink or digital media. 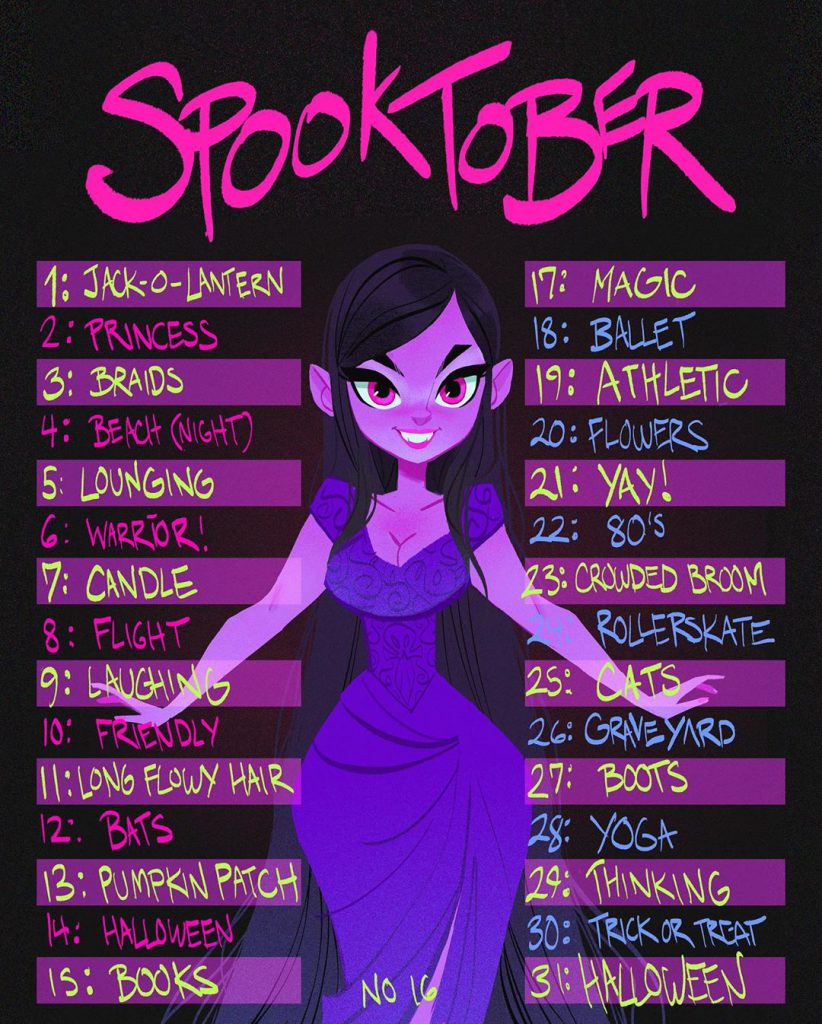 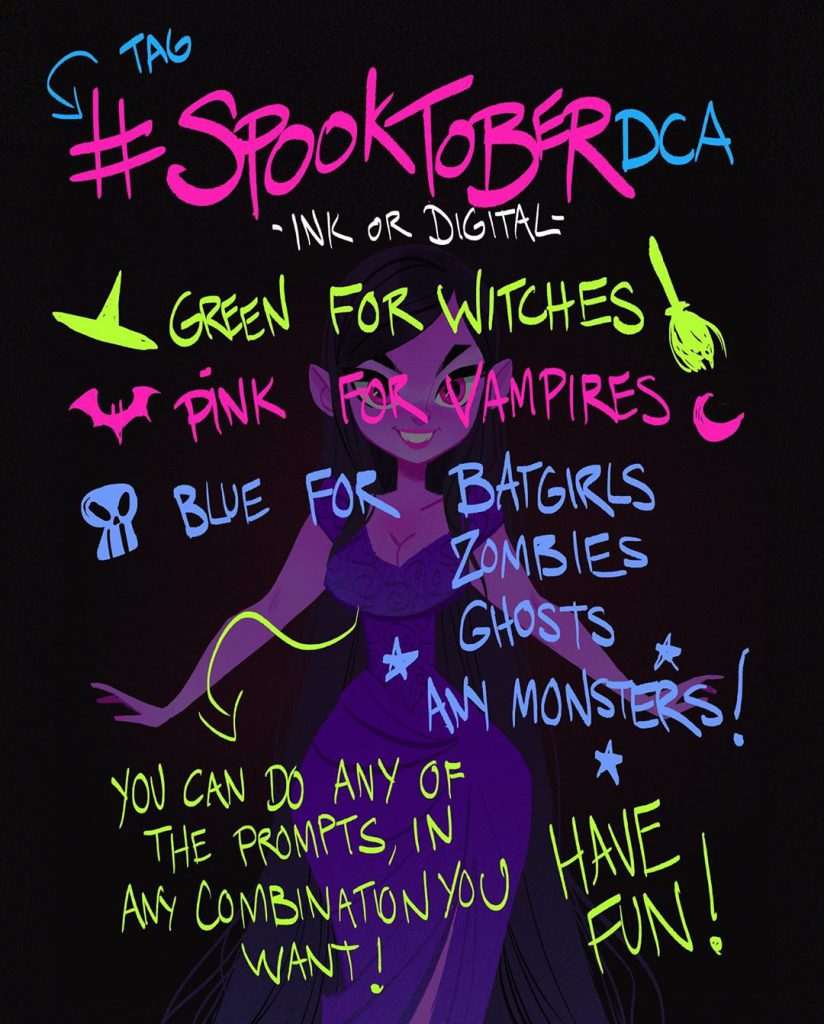 There’s an event, Spooktober 3rd Annual Visual Novel Jam held by DevTalk on itch.io. I believe it’s worth mentioning in this article.
*Even if it’s too late to participate, you can check out the submitted projects for inspiration! 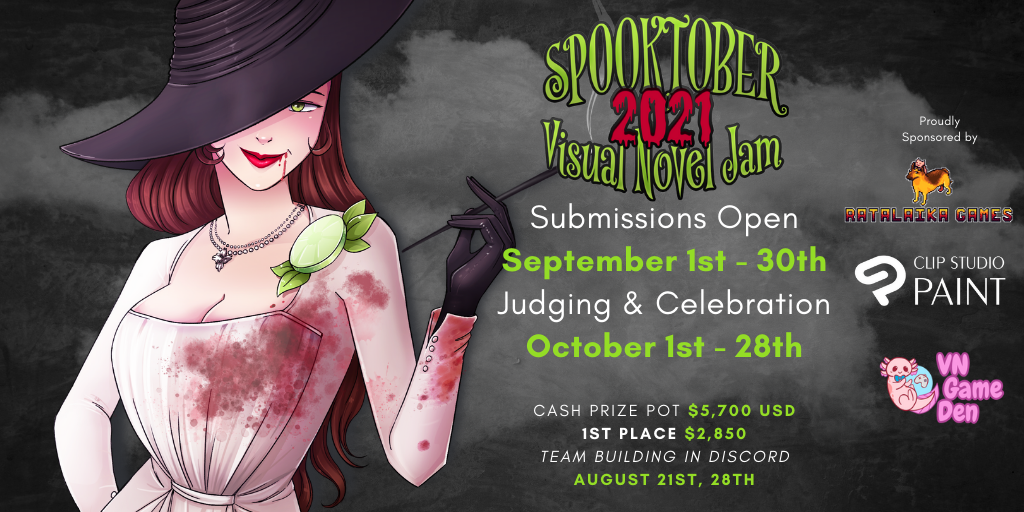 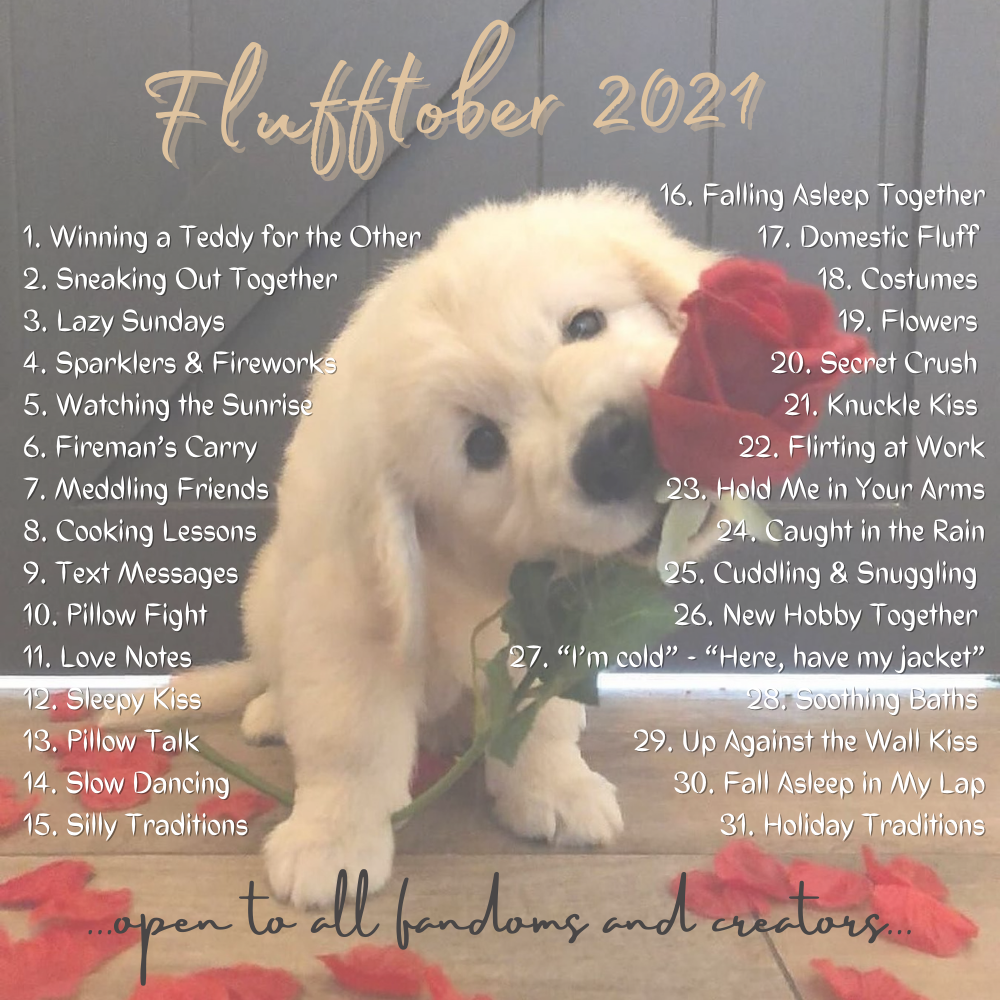 Check out the Flufftober 2021 on Tumblr

Catober is an art challenge dedicated to cats and other feline animals.
The prompt list featured here comes from 2018. 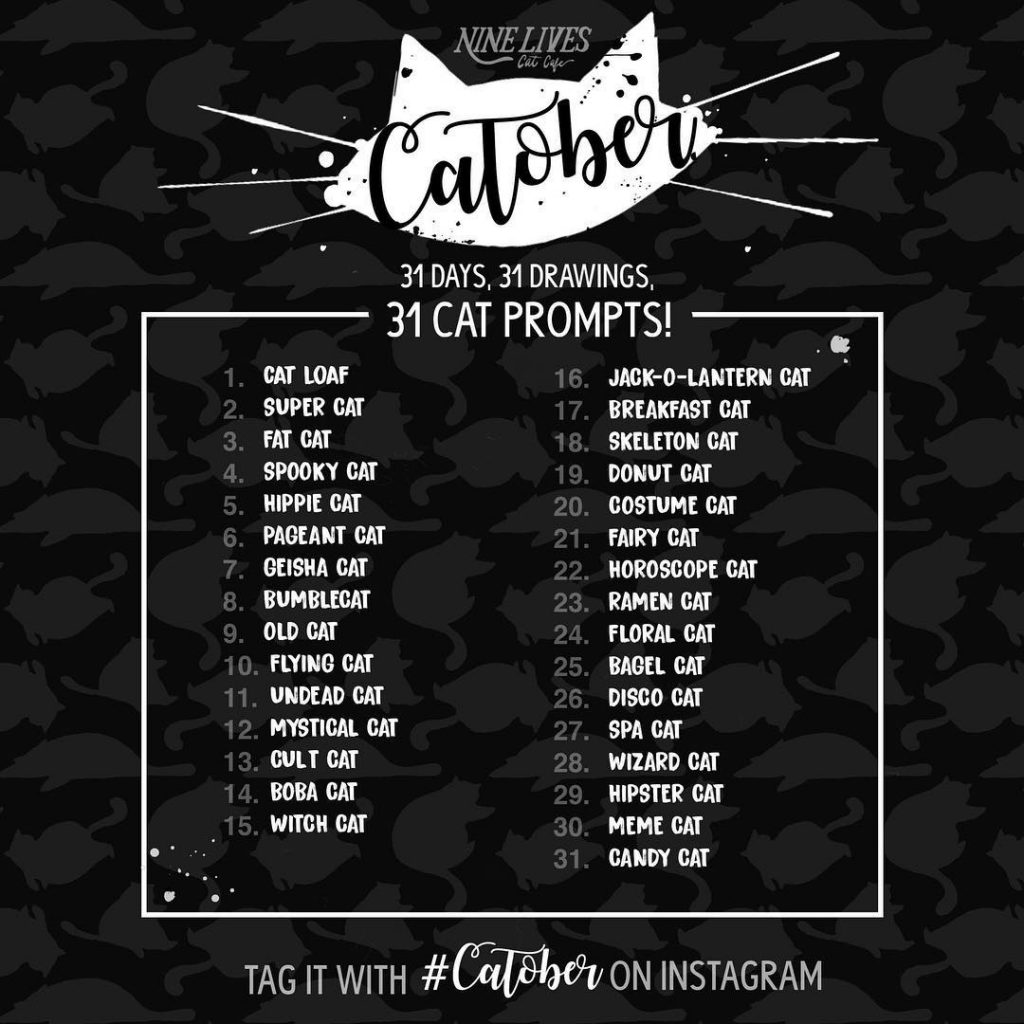 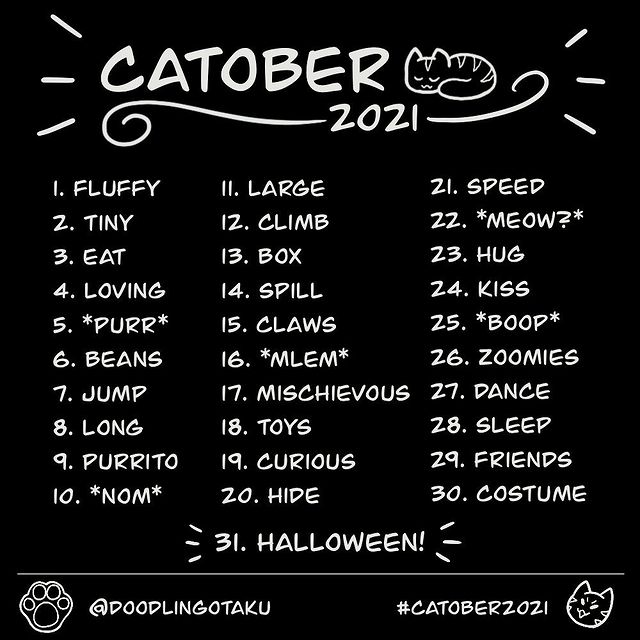 An art challenge dedicated to drawing goblins! We do have an #Orctober already(for drawing orcs), so Gobtober sounds like a good match to those who previously participated in Orctober and want to try something a bit different (but what is still in the range of their love for fantasy). The earliest artworks that I found for this challenge are from 2018 (under the hashtag #goblintober – as an alternative to inktober).

The most popular prompt lists for 2020 and 2021 years are created by @uri_v_art under the hashtag #Gobtober. 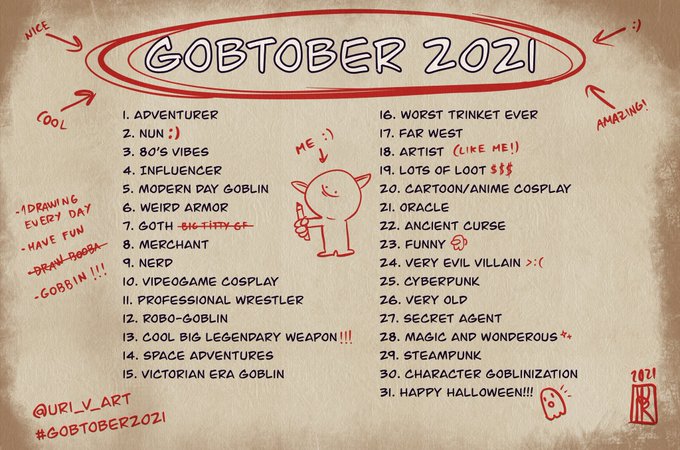 As the name suggests, pumpkins are the main topic of this art challenge. Each prompt will need to incorporate a pumpkin into the design in some way, whether that be a pumpkin head, body, weapon, or a pet. 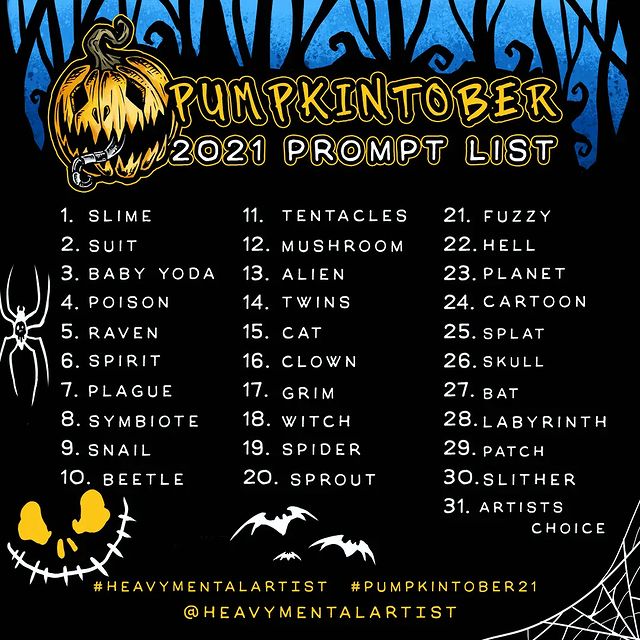 An Art challenge hosted by Mab Graves, inspired by Halloween. What makes this challenge stand out? The “Lite” and “Weekly” prompt lists – for those who are not able to participate in the challenge daily! 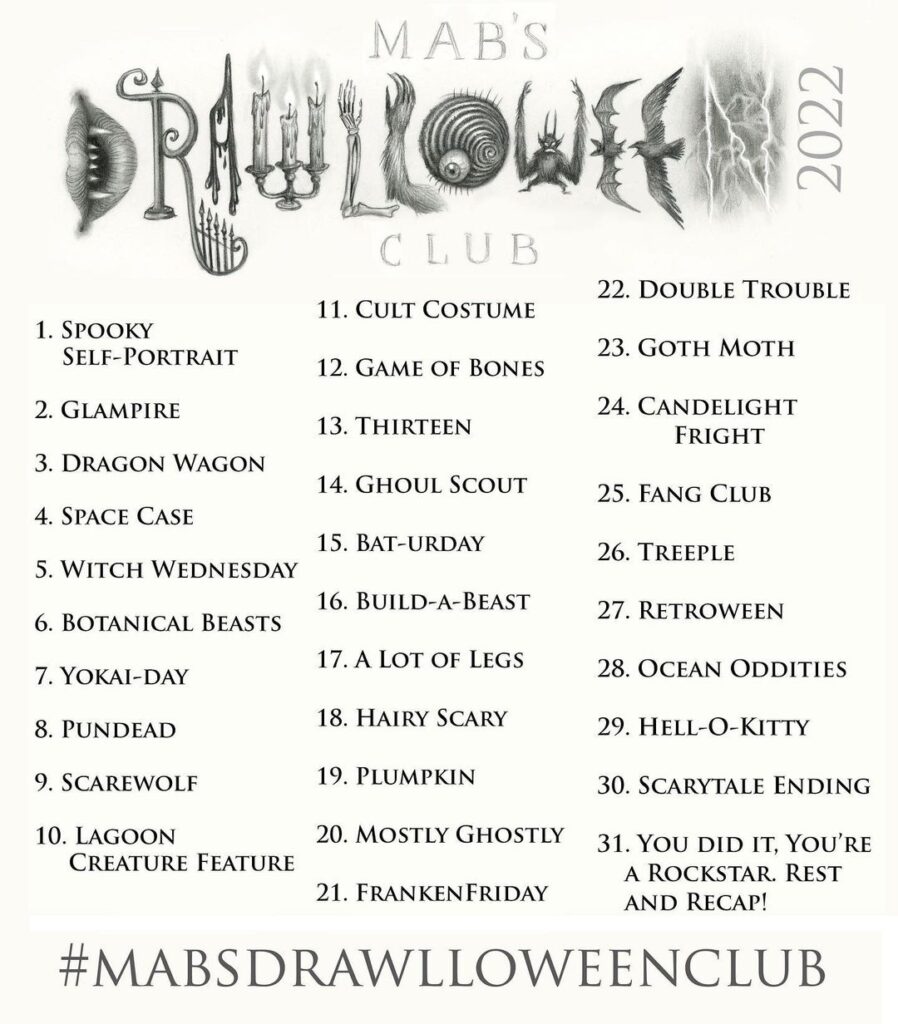 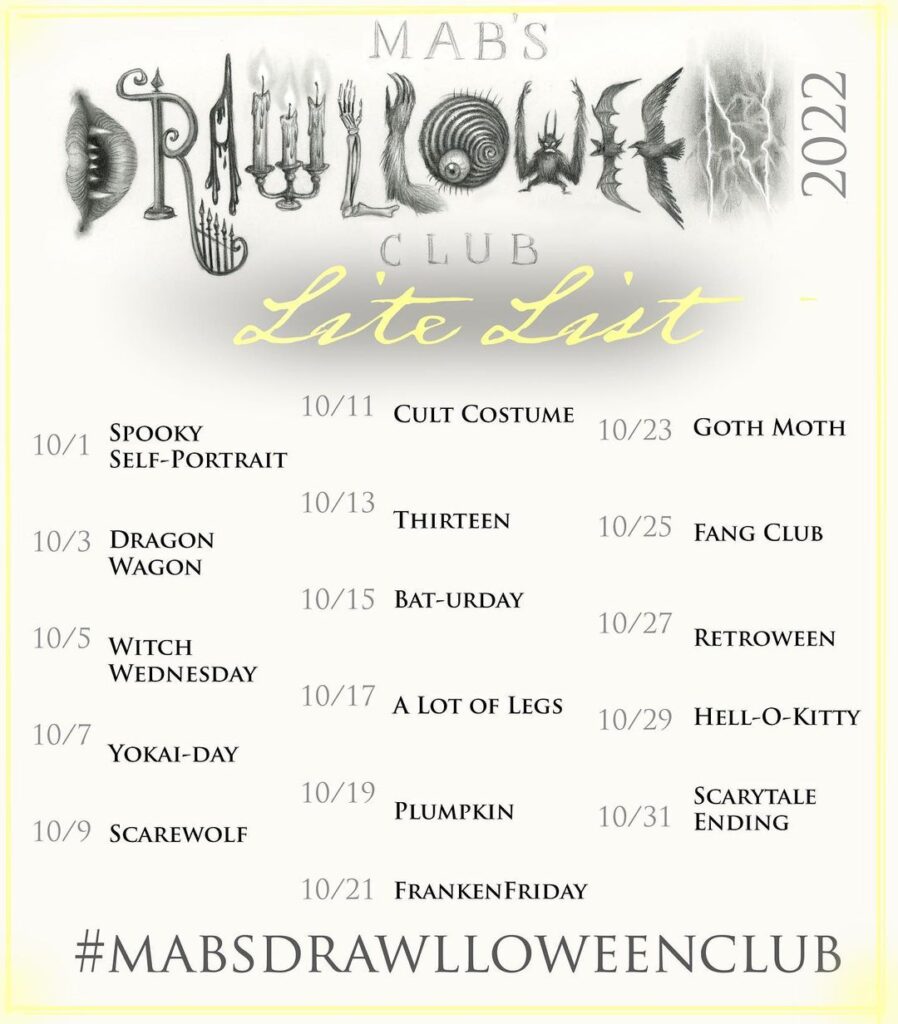 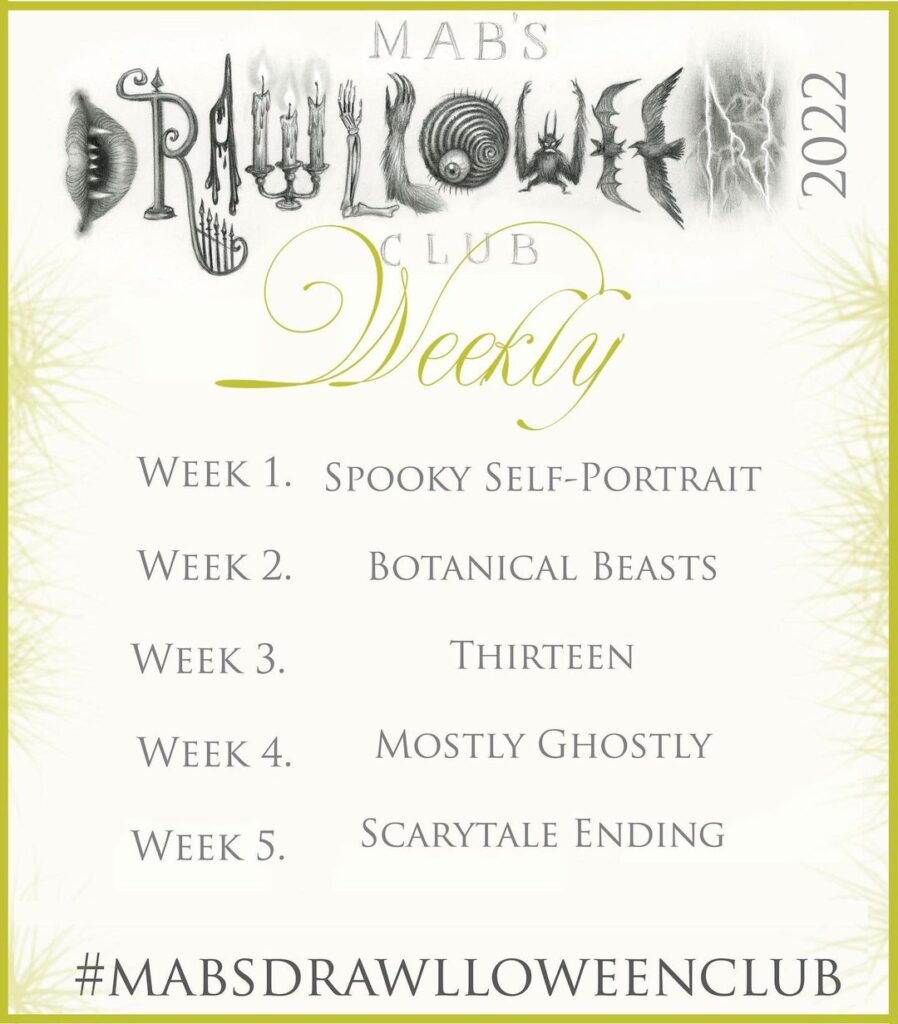 That was the list of alternative Inktober challenges. If you know a challenge that isn’t listed here, please let me know in the comments!

By the way, are you looking for more inspiration? Check out also the Monthly Art Challenges calendar!

*Ps. If you are a digital artist, you might want to check out also this list of Ink Brushes for Procreate [Free and Premium].